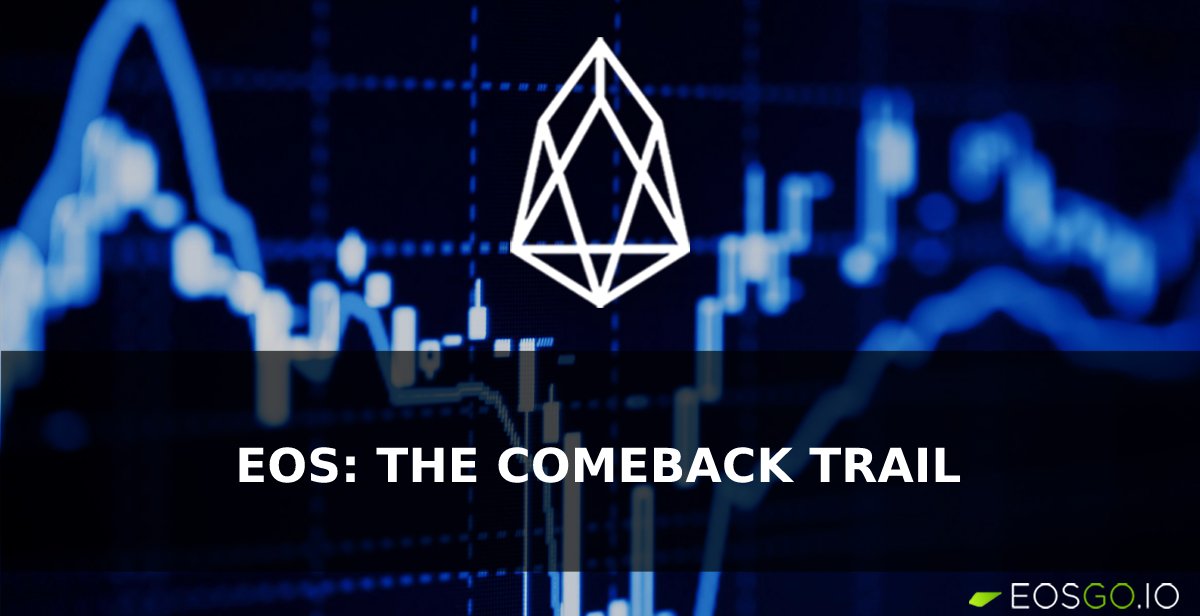 The EOS blockchain project is on a comeback trail…

Having gone through the motions of EOS’ ups and downs, mostly downs, of the past couple of years, it's hard not to appreciate the complete change of direction it has achieved in the past year. For a while it seemed the blockchain project was stuck in a downward spiral that would ultimately lead it into oblivion like the many other “dead chains” or the just as grim “ghost chains”.

EOS’ story has been well documented through various news media sources and for a long while the mass perspective on the project was very negative. In recent months that perspective has been steadily leaning toward more positive media narratives following the community’s takeover of the network from Block.one’s leadership and the installation of a community-led EOS Network Foundation.

The EOS blockchain, which powers the EOS token ($EOS), has and still is undergoing major developments to its ecosystem. Everything from security, core code, and scalability improvements - to the implementation of new DeFi protocols, an Ethereum Virtual Machine (EVM), and a coalition with the other leading blockchains that share EOS’ underlying protocol (Antelope). These initiatives have seen “The New EOS” make major strides towards complete revitalization of its ecosystem and its redemption in the cryptocurrency market.

Steps to the Top

During the bear market of late 2021-2023, EOS had gone from being ranked 52nd by total market cap in the first week of January 2022 to being ranked 38th in the first week of January 2023. This impressive market cap performance caught the attention of serious investors in the cryptocurrency market. More especially so because this run up was happening during a bearish market cycle where everything is pretty much on a downtrend.

Towards the end of 2022, EOS was being considered as one of the leading cryptocurrencies to have in your investment portfolio leading into the new year. By the fourth quarter of 2022 many crypto publications were covering EOS’ epic performance in spite of the bear market. Many began picking it up as a leading cryptocurrency to have in preparation for the next bull market.

“EOS’ native token, EOS, is regarded as the most scalable and programmable digital currency. The crypto asset could come good in a few months, as it hopes to rally from its less than $1 market price to a new price above its $3.53-year high. EOS (EOS) will likely yield a fair profit for holders, and it’s one to watch out for.” - NewsWatch TV (Altcoins that Can Help You Secure the New Year)

This optimism around EOS has done well for its market cap performance in the past year, while other cryptocurrencies have been losing ground during last year’s bear market. However, as things have started looking bullish for the cryptocurrency market this year, EOS has been falling down the market cap rankings. It has gone from position 38th during the first week of the year to 45th position just two weeks later. Which seems counterintuitive to all the bullish and optimistic statements from just a few weeks ago.

The slowdown in market cap appreciation suggests that EOS hasn’t quite fully redeemed itself in the cryptocurrency market. Despite the resurgence of blockchain developments and all that it has achieved as a network, the EOS token is still not being recognized by the majority of market speculators as a leading asset to possess. This, clearly, is the speed bump that EOS will have to overcome on its trail to an extraordinary comeback.

“Most people who got into crypto during 2020/2021 have never heard about EOS. That's one of the main issues.” - @WhaleChart (Twitter)

There are a lot of people who have recently got into crypto (relatively speaking), mostly during the bull run of 2020-21, including those that joined crypto last year. The vast majority of these people have never heard of EOS, including friends and colleagues of mine. The only cryptocurrencies they’ve heard about are those that manage to make it into mainstream media. Cryptocurrencies such as Bitcoin, Ethereum, Dogecoin, Solana, and a couple from the big exchanges.

Whilst not being known to exist in the cryptocurrency/blockchain industry is a major obstacle for any project, for a fundamentally strong project like EOS it is also the best thing going for it. Anyone who has been in the industry for a while understands that the best thing going for any of us is that we’re all very early. Blockchain and cryptocurrencies are a young industry that still have a couple more years to go before they can be injected into the mainstream framework.

For EOS this is a blessing in disguise considering its earlier mentioned history, which still casts a dark shadow on the project even today. People who have been around to witness that history, especially those that feel victimized by it, still have a hard time accepting or believing in the redemption of “the new EOS”. But for people who’ll be discovering EOS for the first time this won’t be much of a problem. Reason being, when looking at what EOS offers in terms of performance and technical capabilities, it is the most promising blockchain to reach mainstream quality status before anyone else.

Like everything else in the EOS comeback story, the project is far from ever reaching its conclusion. Relative to the likely decades-long future of EOS and the blockchain industry as a whole, the past 4 years of its history will soon be nothing but an introduction to its epic story.

This would’ve been nothing but a blip in the journey towards the mainstream adoption of blockchain technology, and a prime example of what happens when communities have the means to empower themselves.

In the journey towards re-establishing the EOS network following the separation with Block.one, each week provides a lo...

We may soon see the launch of Pomelo, a new Quadratic Crowdfunding platform inspired by Gitcoin that will distribute ad...