This Week: Upgrades, Updates, and the Growth of EOS DeFi 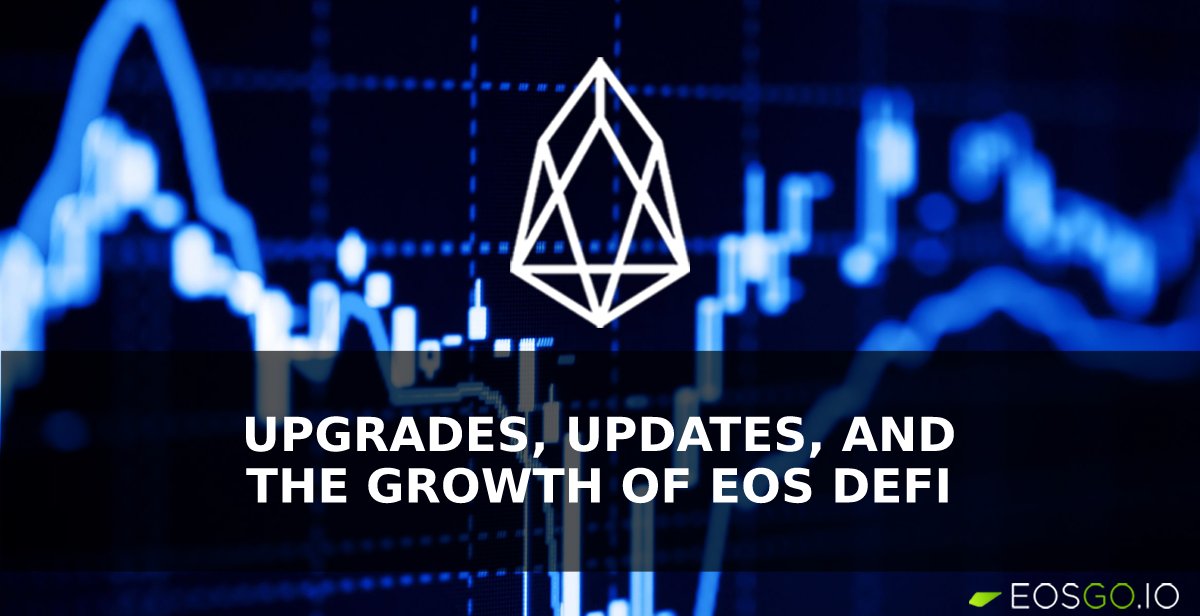 Another active week for EOS development is in the books. With the past weeks showing bullish growth and building for the future, this week EOS network developments have centered around updating and upgrading upon ongoing initiatives.

The common theme between the updates and the upgrades is that each of the featured projects continue to strengthen the EOS ecosystem as a whole. Leading to a much more active network with development and funding efforts to give “the new EOS” every opportunity it needs to be a huge success.

The new season of Pomelo Grants kicked off last week with the opening of grant applications. On Wednesday (November 23) grant donations were opened for the public to donate funds toward supporting their favorite public goods projects in the EOS ecosystem.

Already there are 108 grants that have been approved, which gives donors a lot of options of projects to donate to in many different sectors such as GameFi, DeFi, marketplaces, utility, and media, etc. Donations will close on December 14, and donors are encouraged to help boost the amount of funds a strong project receives from the $365,000 matching pool.

Grant owners are also being presented with many opportunities to present their projects to the community. Other than on their social media platforms, grant owners are provided with a large community platform to engage with their audience through rapid fire pitch sessions and the community fireside chats.

The release notes for the next upgrade of the codebase have been published. This comes only two months after the recent consensus upgrade (hardfork) from EOSIO to the Antelope protocol on September 21, a date that marked EOS Independence Day.

Unlike the consensus upgrade from EOSIO to Leap 3.1 on September 21; this codebase upgrade to Leap v3.2.0 will not require node operators to upgrade in order to stay in sync with the EOS network. However, they will miss out on the new features that come with this upgrade.

New features include: a new unified command-line interface (CLI) tool called ‘leap-util’ to support users operating Leap nodes, a significant number of new ‘cleos’ sub-commands, and various performance enhancements. Upon successful testing the upgrade will then be implemented on the mainnet.

DeFi and economic growth on the EOS network is on the rise. This is a result of the recently introduced Yield+ initiative and its attempts at incentivizing economic growth in the EOS ecosystem through token rewards.

Yield+ on-chain Liquidity Rewards Program measures and rewards protocols that provide liquidity by locking up tokens and increasing economic activity on EOS. Since dApp developers and DeFi protocols have been incentivized with a 5% APR on total value locked (TVL), this has led to protocols formulating strategies to benefit them and their users.

As of now the total value locked on the Yield+ platform sits just shy of $20 million (at $19.78 million). This represents an increase in TVL of roughly $4 million in under two weeks, and an addition of one more DeFi protocol to bring the total to 14.

Having launched early last week, EOS Network Ventures (ENV) has been one of the most anticipated projects of the year in the EOS ecosystem. Developers, project owners, EOS token holders, and all other EOS stakeholders are keen on seeing the impact ENV will have in growing a stronger, more competitive network of applications in the blockchain space.

With its purpose to solely to invest exclusively in projects that are building on the EOS network, ENV, funded with $100 million to invest, should be the network’s strongest vehicle for onboarding developers onto EOS.

The update this week from the EOS Network Foundation was in providing a FAQs (frequently asked questions) to help clarify some of the misconceptions about EN Ventures. Also, to describe what EN Ventures is and how it will operate.

Greymass, one of EOS’ leading Block Producers, has revealed the re-branding of the SDK project they’ve been tasked with building by the Antelope Coalition. As the Antelope Coalition is working on inter-blockchain communication (IBC) among other things, Greymass won the RFP to build a software development kit that will provide web applications with the different tools and data types they’ll need to interact with the individual Antelope networks.

In order to give the “Web Client SDK Project” its own identity; one that is unique and memorable, Greymass has come up with the brand name Wharf. The definition of the name ‘wharf’ is that: it is a structure that is built along the shore of navigable waters, so that ships can load and unload cargo or passengers.This definition strongly relates to the role Wharf will play in facilitating for effective interaction between web applications and each of the individual Antelope networks.

Although the SDK Project itself won’t be complete until sometime in the second half of 2023, with a strong brand name at hand, Greymass will be releasing complete pieces of the project over the next nine months.

The recent Twitter Space by Trust EVM shed some light as to how it will achieve the feat of being the fastest EVM in th...

A group of Block Producers candidates, formed by GenerEOS, EOS Rio, shEOS and Node One, recently implemented an open s...