Can EOS' Decentralized Nature Compete Against the Rise of Centralized Blockchains? 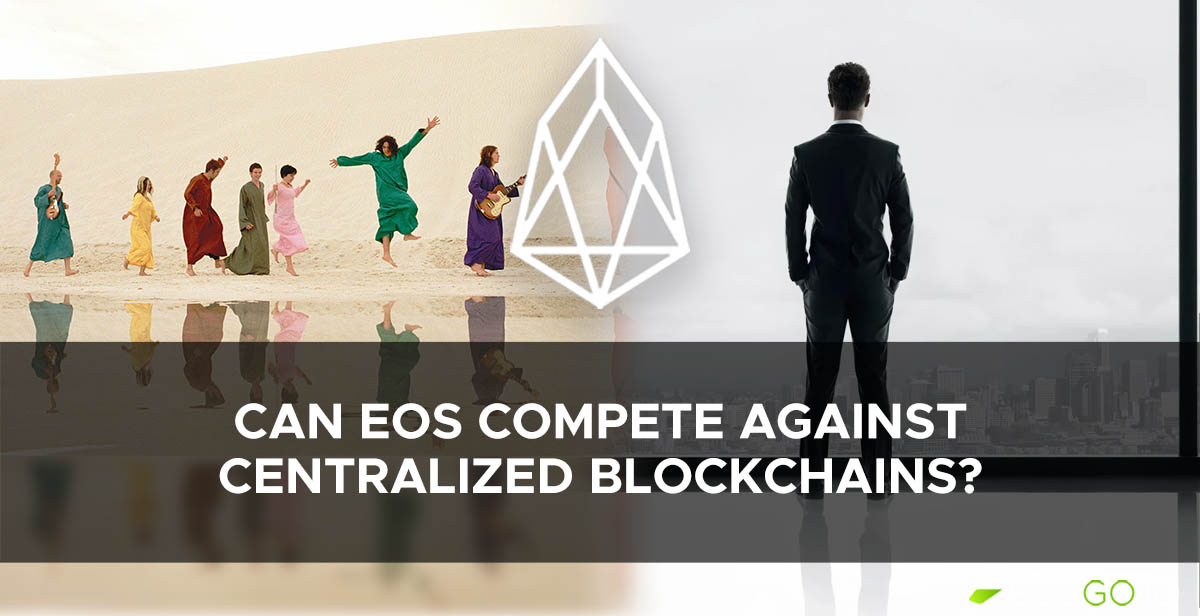 Strengths and Benefits of Centralization

Centralization has afforded blockchain projects many advantages over their more decentralized counterparts. When a network is centralized, in one or more ways, it enables its participants to easily introduce gamification that manipulates the metrics by which value is expressed. For example, if a minority of people control 60/70/80% of a network’s total token supply then they could pretty much dictate to the market what the token price should be - by tipping the ‘supply vs. demand’ scales.

Similarly, when a blockchain or its network has a centralized governance mechanism then the few governing participants get to dictate to the rest of the participants what the direction of the network should be. In other words, the few participants will decide which areas of development to focus on and which to disregard. This obviously provides a major advantage when it comes to making quick decisions and implementing them.

Strengths and Benefits of Decentralization

Now EOS has neither of those: (i) it’s governance mechanism is more decentralized than that of competitors, and (ii) it’s token was the most widely distributed in the industry from launch. So, participants of the EOS network lack where participants of competing networks benefit, which is why competitors tend to easily attract whales because they often seek power and influence over networks. On EOS that is ultimately impossible, as evidenced by the EOS community vs. Block.one saga.

From a fundamental level EOS is built to resist the effects of centralization through a delegated proof of stake (DPoS) mechanism so that the desires of the majority can overcome those of the powerful few on the network.

It is this fundamental ideology that led economist, monetary historian, and advocate for personal freedoms, Mike Maloney, to call EOS his “largest investment in cryptocurrencies”. Citing EOS’ ability to evolve and do almost everything all other blockchains are capable of, and that most of EOS’ competitors are probably going to go to zero as some of them are deficient in design. It is this same decentralized design that has passed the scrutiny of the Securities Exchange Commission (SEC) who have since labeled EOS as a utility token. A utility token that so happens to run on the highest performing blockchain network in the industry.

The blockchain/cryptocurrency industry has tripled in size since EOS’ 2018 launch. That brings with it a lot more competing blockchains that make claims of providing a better service than that provided by EOS. As I’ve already mentioned - most of these competitors are centralized networks, which defeats the purpose of a trustless network. Secondly, the bold claims they make often falter when challenged by the dynamic realities of being a global network that facilitates every possible transaction you can think of on the internet.

To this day, EOS still holds the record for the most operations conducted on a blockchain in a day and it still had the capacity to add more. Contrast that to its competitors today whose networks clog up at not even half EOS’ record operations, not to mention the rise in fees whenever usage ramps up. The rest of the competitors lack the user adoption to put up any good transaction numbers.

From a price/investment perspective EOS has had one of the worst performances out of all the high market capped coins. From that point of view, EOS has had a tough time keeping up with centralized blockchains and price movements of their cryptocurrencies. This is where recent developments in EOS have me bullish for the future of the project. As mentioned earlier, centralization has given many blockchain projects a multitude of advantages over decentralized blockchains like EOS. However, things are changing.

Putting aside the fact that the SEC is ramping up efforts to target these centralized blockchain projects for offering cryptocurrencies it deems to be securiities, EOS participants have created a support structure to complement all the advantages the network already has.

How EOS is tackling the vulnerabilities of decentralization

To fill the gap that decentralization created on the EOS network by making it inefficient in taking on collaborative efforts; Block Producers, proxy owners, and token holders all voted in favor of setting up an entity that would best represent all EOS stakeholders. In turn that entity would be funded by the network itself to ensure that it’s able to deliver, and backed by the community, try and compete with the efforts put up by the more centralized networks. That’s how the EOS Network Foundation (ENF) came to be.

Since then, a lot of work has been put in by the entity and has even inspired a paradigm shift to how community efforts are carried out to create value for the EOS ecosystem. We’ve seen the rise of initiatives such as Helios (VC & Incubator), Pomelo Grants (Crowdfunding platform), and the ENF Working Groups, among many others that have spawned to better the EOS ecosystem. With so many different initiatives all working to the benefit of EOS stakeholders this also means there are many inputs directed towards creating value for EOS. When you have different instruments all focused on the same target, it is nearly impossible to miss it no matter how small the focal point is.

However, efforts by EOS stakeholders and the EOS Network Foundation over the last few months have convinced more people in the industry that both the blockchain and the cryptocurrency will outperform the market in user adoption. We’re already seeing EOS grab market share this year as some of these initiatives are brought to light, and as a result of the announcements of additional bullish initiatives for the EOS network. For instance, the upcoming EOS EVM, the collaboration between EOSIO blockchains, and the upcoming hard fork of the EOSIO protocol.

Nine months after establishing the EOS Network Foundation, the EOS community can finally say that EOS is putting up a competent fight against its strong centralized competitors. The project is gaining wider visibility in the industry. Foundations are being set for the value adding initiatives to grow independently and diversified in their approaches. And community sentiment is at an all-time high to propel EOS to greater heights.

One great thing about it is that this current movement is driven by action rather than the promises of recent years. How far these developments and initiatives will take EOS is anyone’s guess and will be a growing topic of discussion as more investors get onboard.

● A Community’s Struggle for Self-reliance (EOS Network Foundation vs. Block.one)

Recently, the EOS New York team, in collaboration with other members of the community, published their proposal to solv...

In a continuation from the bearish trend that [entered late last week](https://www.eosgo.io/news/eos-starts-strong-end-...