Why EOS Might Be A Bad Investment For You

*[Please Note**: This is a two-part article meant to present the arguments for and against EOS in order to provide unbiased information that represents competing perspectives regarding the future of EOS, especially in the sense of expected financial value – this is NOT financial advice. The next part is found at the end of this article.]* 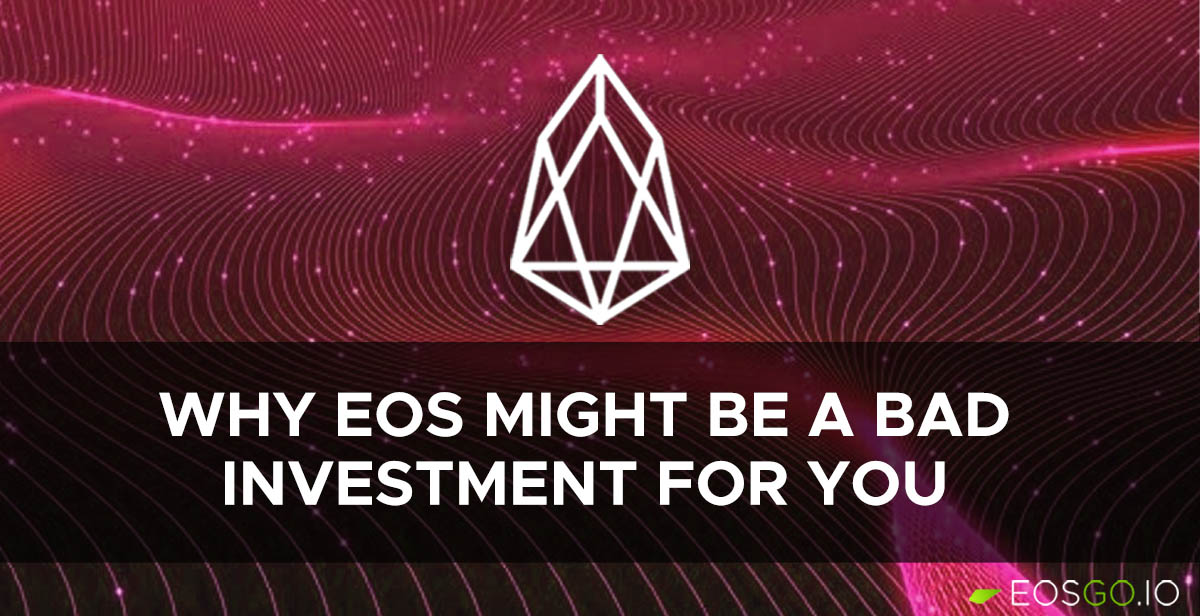 To even consider writing this article, I had to think of all the negative messages and comments I’ve gotten from people over the past year and the reservations they have about EOS as a sound investment instrument. A certain doomsday-like perspective tends to be the common tone used to deliver this opinion; how EOS is destined to fail and all the good that it has is just a façade concealing a collapsed network.

Although I’ve taken this unfavorable approach on EOS a couple of times before to help me consider alternate possibilities, I’ve never actually put it down in writing. There are some interesting points to this negative take on the current and future state of the EOS network. So, allow me to present this alternate perspective on EOS as an investment.

Going back to EOS’ initial coin offering (ICO) in June 2017 there were red flags regarding the mechanisms used to raise funds.

Firstly, the year-long ICO was designed to raise a whole lot of money that would be in the control of a single organization – Block.one.

Secondly, the ICO used a mechanism where buyers had no idea of how many tokens they’d receive until the amount invested was calculated and tokens were distributed according to the percentage each person contributed to the total amount. Raising concerns that this gave those with superior resources, or even insider information, an unfair advantage on the distribution of tokens.

Thirdly, the EOS investors were doing the opposite of what decentralized networks are about by depending on a third-party organization (Block.one) to do all the work for them rather than build the network themselves.

Fourthly, the architect of the EOS.IO protocol has had a history of starting up blockchain projects only to up-and-leave to start another project, raising more money.

Fifthly, the company behind the ICO and the building of the EOS.IO protocol is backed by shady characters who shouldn’t be trusted, much less with billions of dollars.

Sixthly, the money raised from the sale of EOS tokens would not only be used to benefit EOS token holders but would also build tech/infrastructure that benefits anyone with knowledge of code since the code (EOSIO) would be open-source.

All these early red flags were signs of a toxic recipe that would most likely lead to disaster. This was the first opportunity for investors to eject from the project and instead wait to look for safer more promising projects. After all, this was during the bullish trend of ICOs where new projects were launching every day. Although, much like EOS, most of them never saw all-time highs again after the 2018 market crash.

Even after its launch EOS continued to drop in price when it should’ve been maintaining its price at the least. This meant that everyone who wanted to buy EOS had already bought and the only thing left for them to do was to dump it to realize some profits. It didn’t help when less than a week after launch the EOS mainnet had to be halted as there was an error in the handling of transactions; taking about 5 hours to find a fix.

Since those infant years, there are still issues today that are preventing EOS from seeing surges in its price. Some of those issues include:

- Sock Puppet BP’s / who contribute nothing to the network

Sock puppet Block Producers (BPs) are like shell corporations – no actual work is being done or capable of being done and exist only to funnel funds.

A lot of Block Producers offer incentives to token holders in order to gain their votes. Other Block Producers work with or bribe proxy holders (if they do not outright own the proxy) to ensure they receive a vote.

There are a couple of Block Producers suspected of using deposited funds of users to vote themselves into paid positions. The biggest issue with this being most of these BPs rarely, if ever, contribute to the growth and success of the network. As if that was not a big enough concern, token holders are constantly worried that these exchange BPs are dumping the token rewards on the market rather than re-investing them back to the ecosystem, which puts more pressure on the token price.

Despite having raised billions in the token sale Block.one has continuously failed to even attempt to effectively market EOS to the world. And despite earning ± $2 million monthly, Block Producers can’t find ways to collaborate in funding initiatives (such as marketing) that increase the value of EOS which in turn increases their earnings.

Several EOS VC funds were started with funds raised from the ICO to invest in companies and/or projects that would integrate the EOS blockchain into their product and service offerings. But only for those companies to go build such products and services on competing blockchains, taking EOS investor money along with them.

Of course, there’s also the lack of communication from Block Producers, Block.one, or any other entity, about the ongoings of the network. Sometimes, if there’s any communication, it is done through channels that the average token holder has no access to or is unaware of. This lack of coordinated communication is then blamed on decentralization as if the top Block Producers aren’t communicating with each other, and if it is so, it then suggests an even bigger problem.

The road to ruin ahead?

Every week, month, and year brings its new challenges to EOS nobody knows what bag of worms it will deliver this time. It is safer to just accept your losses and leave the project while your investments are still worth something.

When it comes to building back better, nobody does it better than the EOS ecosystem. This week has been an eventful one...

Wombat recently announced the new option to buy EOS tokens directly into the wallet with credit and debit cards. This w...