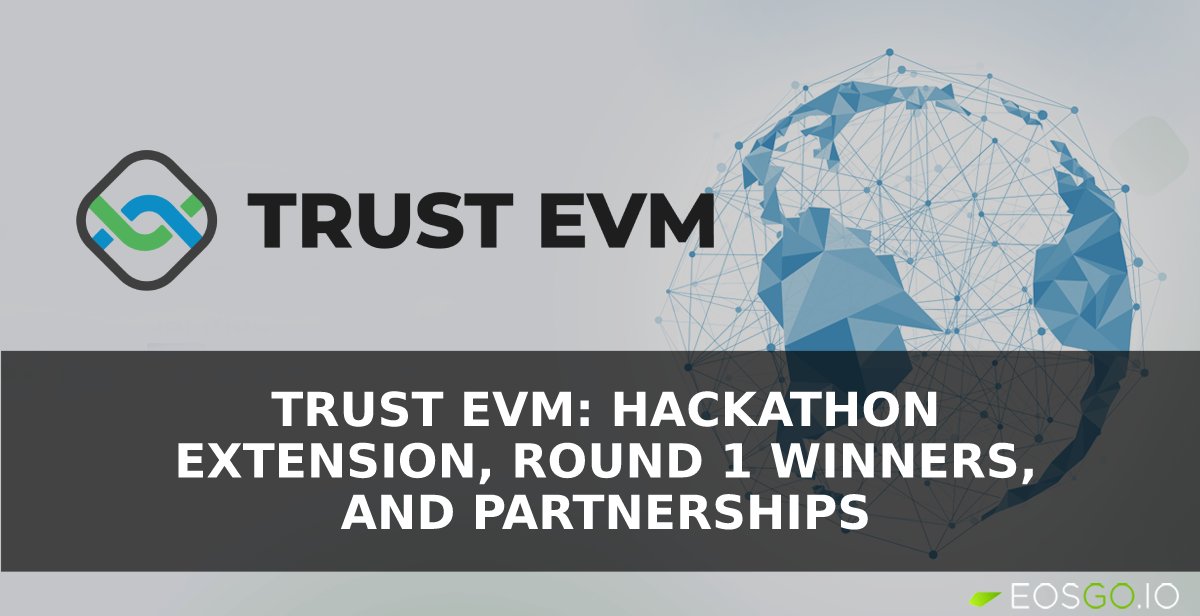 The Trust EVM GameFi Hackathon 2022 has been running for four months now. Its aim is to promote Trust EVM by attracting and encouraging developers to build GameFi applications on its industry-leading and highly performant EVM blockchain.

Initially scheduled for a Q4 2022 launch, Trust EVM’s mainnet launch has been delayed for a Q1 2023 launch in order to improve upon its tech specs. However, GameFi developers will be happy to know that the hackathon has also been extended with an additional round that will run from November until February 2023. Likely to coincide with the expected mainnet launch of Trust EVM.

The new hackathon round (Round 3) will add more tracks, likely a hackathon and an ideathon, with submission from Nov 21 - Feb 12, 2023. Then there’s the Winners Fight round, from March - April 2023, with prizes for all winners of previous rounds (Round 1-3) and a special award for the leading project.

Here are the winners from the previous round (Round 1):

● The Wake - the world’s first and largest isometric multiplayer role-playing (MMORPG) game to feature Norse mythology in the metaverse.

● Fabwelt - which creates a high-end gaming ecosystem and amplifies the fun with in-game NFTs, Play to Earn and DEFI.

● Galactic War - the biggest FPS NFTs game with AAA-Standard based on the Unreal Engine 5; we promise amazing gameplay and effects. We aim at the metaverse with VR technology, bringing a more realistic experience to E-sports as players battle in the Milky Way.

● FootEarn - which has engaging and accessible gameplay that attracts gamers of all ages, genders, and countries. Moreover, in Multiplayer mode, users can compete directly with each other in tournaments and receive prizes.

● Moverse - an all-in-one fitness Dapp with a mission to dominate the Health and Wellness industry! Where active users are adopted into our community making fitness habits stick by strengthening muscles & mindsets including personalized coaching powered by AI technology. Using recognition and tracking algorithms, "Anti-cheating" mechanisms are built into the platform, ensuring a proper work-out every time!

● Godel - a UGC metaverse publishing platform. Once DAOs and individuals create the 3D scenes with the Low-Code editor provided, the platform converts the 3D scenes into NFTs under ERC4907 protocol, which ensure the users’ ownerships in various activities such as rental, sale and Ads profit-sharing scheme.

● Knightiny - a game with DeFI and NFT tech. where players use any of their own playable NFTs from any metaverse to play. Features: Unreal Engine + Metamask + Multiverse = Knightiny

● MotoDEX - is a competitive simulator in which users participate in motorcycle races, develop their riders and improve high-speed tracks. The continuous cycle of competitions opens up unlimited opportunities for users to earn money. After each level is passed, champions are awarded with real US dollars.

● End Of Space - a space shooter game on Trust EVM with upgradable NFT spaceships and a built-in DSL for you to create your own adventures! Let's first look into the game itself then the DSL.

The winning applications for Round 1 will be available on the Trust EVM testnet in two months. This announcement was made on October 26.

With so many preparations going on ahead of its mainnet launch in Q1 2023, Trust EVM has also recently announced a couple of partnerships.

(1) Trust EVM x Salus Security. The purpose of this partnership is to bring quality security solutions to web3 projects on the Trust EVM blockchain. Which means that all projects built on Trust EVM will be backed by Salus Security’s machine learning technology. Its technology is able to verify the smart contracts’ business logic with as little friction and effort as possible. The company recently announced the completion of its seed funding round, which was led by Binance Labs, the investment arm of the world’s largest cryptocurrency exchange.

(2) Trust EVM x Meson. One of the vital components for a blockchain network is the user experience, in this case, the ability for its users to quickly and easily interact with other blockchain ecosystems. This partnership means that Meson’s finance protocol will be launched on the Trust EVM mainnet to provide users a faster and safer way to execute low-cost, zero-slippage cross chain stablecoin swaps. These stablecoin swaps can be made back and forth between a multitude of chains including; Ethereum, BNB Chain, Polygon, Avalanche, and Fantom, etc.

(3) Trust EVM x Multichain. In the spirit of enabling users to interact with other blockchain ecosystems, Trust EVM has partnered with Multichain, a cross-chain router protocol, for cross-chain communication and value transfers. With over 60 blockchains and close to 3000 deployed bridges on Multichain, this partnership ensures that Trust EVM is interoperable with more than 60 EVM and non-EVM chains. Interoperability between blockchains in the Multichain ecosystem goes beyond token transfers but also includes services such as Crosschain Contract Calls, and Crosschain NFT Bridges and Router.

These partnerships play a significant role in building the foundations that will strengthen the Trust EVM network and showcase it as a suitable EVM environment for high performance applications.

In his recent tweets, Brendan Blumer wanted to express his opinion on how BTC could leverage the advanced EOS technolo...