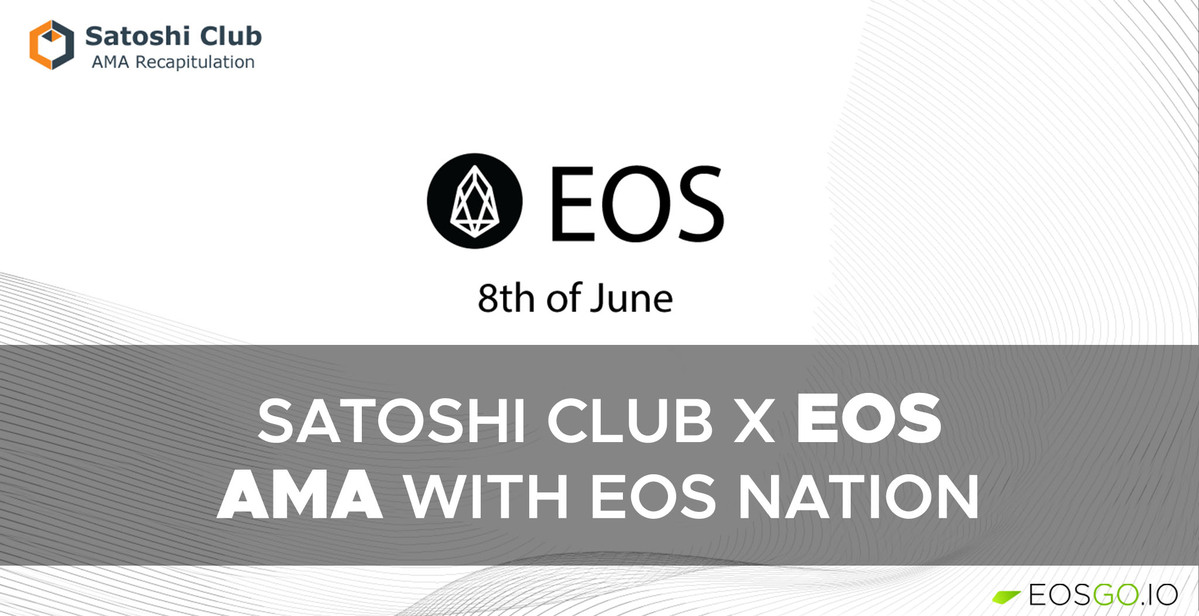 On June 8th an AMA was organized by Satoshi Club with Yves La Rose, CEO of EOS Nation. Below we provide you with an overview of the topics covered, must read for everyone!

"EOS as a blockchain is well positioned to accommodate the DeFi needs due to its massive performance capability. We see that traditional financial services requires a lot of throughput capability to be able to perform efficiently and properly. Think back at the MAKER problem a month or so ago. If the blockchain isn’t fast enough to react to big movements, it isn’t ready for prime-time. During this same crash, EOS based DeFi products did extremely well under pressure as they are capable of 0.5ms changes, reacting to the external changes instantly."

"(...) EOS has an ever growing list of DeFi products, such as EOSDT, an over-collateralized stable coin (like MAKER). Major differences are in the pace at which the oracles are capable of adjusting to price movements, as well as the underlying permission structures found natively on EOS."

Developing on EOSIO from Ethereum

"EOSIO is coded in C++, so there is no Solidity type language to learn. But with this recent prize (Ethereum Virtual Machine on EOSIO), you don’t even need to learn anything new if you’ve already coded a project on Ethereum. As a developer, you can write your code in Solidity, compile it and deploy it directly on the eosio.evm contract."

"ETH still has the lion’s share of products, but unfortunately is built on a soft foundation that is limited in scalability. This (Ethereum Virtual Machine on EOSIO) enables developers to continue working on their projects instead of starting from scratch. Leveraging EOSIO is just the smart move once you understand you aren’t limited anymore"

"I invite you to check blockchain stats on Block’tivity. BY FAR you can see that EOS is capable of and currently serving more activity than all other blockchains COMBINED!"

"(...) For a mostly complete full list of dApps built on EOS, please check out DappRadar."

"(...) In March we decided to see how far we could go and we did 150M actions in one day on the LIVE chain – that’s as much as Ethereum does in one year. We weren’t even at 50% capacity of the chain. Apples to oranges obviously. But it shows how far blockchain technology has come since ETH was launched in 2015."

"EOS is here today, it’s live, it works, it’s capable of massive throughput and is backed by the single largest ICO in history. The amount of innovation and code that is coming out of EOS is insane! The EOS token is essentially your gateway into EOS as it’s a representation of the resources available on the network.

"Yes, this is one of the reason why we have been stress testing the network over the past few months. (...) EOS is now capable of handling over 250M daily actions if we were to have that need. This is without any additional changes, and without even reaching out limits."

How was the Grants program created, which you plan to finance future projects using EOSIO community members and the protocol?

"Last week Block.one awarded 34 grants to developers around the world, on top of the $200,000 prize to develop the EVM for ETH, and the $100,000 hackathon prize pool which will be released to the winner on June 12th."

"Decentralization isn’t an all or nothing thing – it’s very much a spectrum is ever changing, never static. In EOS we leverage the DPoS consensus mechanism that I mentioned above. The more token you have, the larger you say in the network and who gets to secure the network. This is very much based on the “skin in the game” principle."

Recently a new token has been launched in the EOS mainnet with the aim of speculating on the price of RAM in the mainne...

After the announcement of Dan's departure from Block.One, which shook the community, as of this week the former CTO is ...