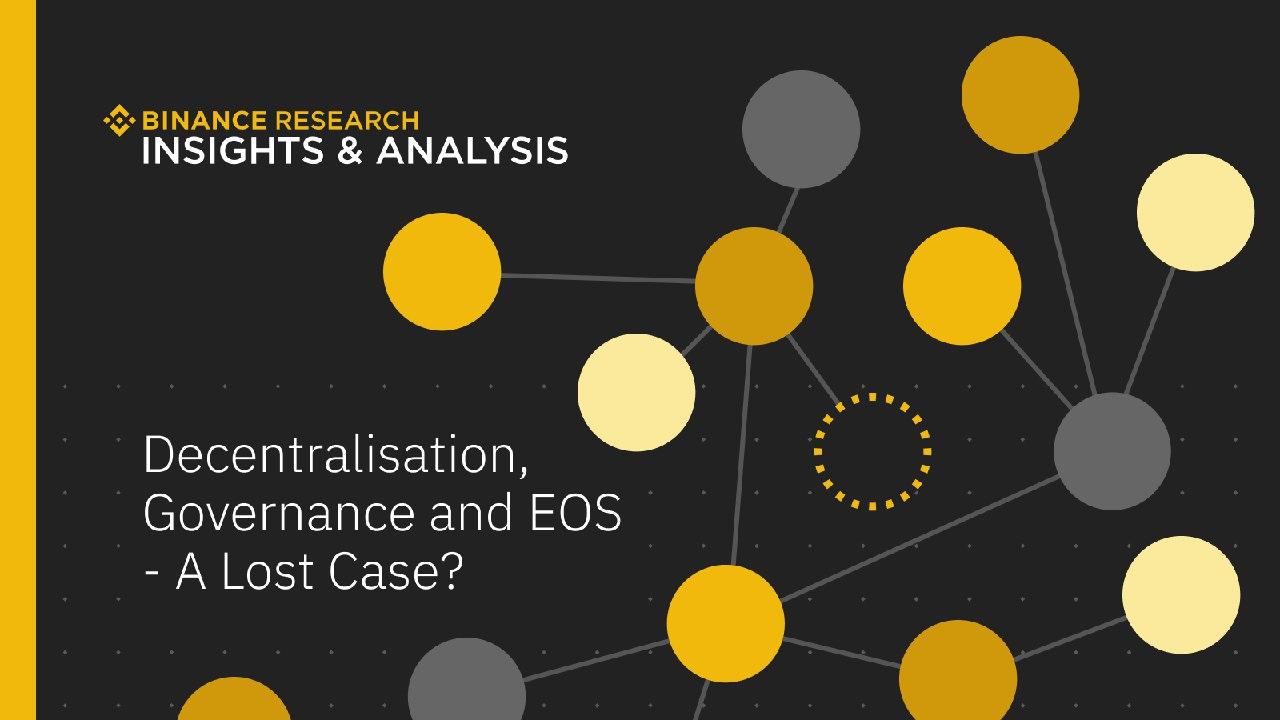 Binance recently carried out and published an analysis on the governance of EOS, highlighting all its problems and possible weaknesses. Many of these topics have already been discussed repeatedly within the community during 2019. Will EOS be able to improve once again and carry on the title of the most used public blockchain?

Starting from a (failed) attempt to objectively define decentralization and measure it, it was explained the mechanism of delegated Proof of Stake running on EOS. In particular: "21 block producers (BPs) are elected by EOS token holders from a broader set of block producer candidates".

To understand later whether EOS is decentralized or not, they referred to the concept of decentralization defined by Vitalik Buterin, founder of Ethereum, in 2017, according to which decentralization has 3 main objectives: 1. collusion resistance 2. fault tolerance 3. attack resistance

"Collusion resistance describes the ease of system participants to organize in ways that benefit them at the expense of others. Arguably, it is thus the most relevant metric against which to assess EOS' governance."

According to a paper published by Whiteblock in 2019, Block Producers' incentives on EOS are misaligned to promote collusion. This is caused by the following factors:

According to further analysis by Binance, on the EOS mainnet, the largest 164 voters have 72% of the weight in regards to casted votes. Of these, 84% vote for 30 BPs at the same time. Probably because they are part of vote trading.

Distribution of EOS votes BPs as of February 12th 2020.

Distribution of EOS votes BPs as of February 12th 2020

A theoretical definition of (2) fault tolerance may describe it as the number of failures a system can endure while maintaining its function.

According to Binance, the EOS mainnet is not Fault tolerant mainly for two reasons:

More insights: from an analysis of the reliability and availability of Block Producers, it can be seen that the BPs with the worst performance are: Bitfinex, EOS WIKI, and EOSHuobiPool. 2 out of 3 are among the most important exchanges in the crypto community.

This attack resistance can manifest in various ways such as, for example, censoring attacks. Generally speaking, decentralised systems are supposedly more expensive to attack due to their lack of central points of failure."

According to the EOS analysis it is susceptible to Sybyl attacks, as a single entity can register several Block Producers, and to a geographical risk.

The first of the two could be resolved by 1 Token 1 Vote, as the single entity would be forced to vote for only one BPs.

The second is a common risk not only to Blockchains (including Bitcoin, Ethereum, etc.) but also to many other industries, but that still affects the voting patterns on EOS and is therefore to be taken into account.

The conclusion states that the vulnerability of EOS to Sybil attacks makes it non-transparent, and as a result it is difficult to properly analyze BPs voting patterns. In addition, the number of users on EOS in recent months has dropped dramatically, and it is hoped for a relaunch of adoption through the release of Voice.com.

"While it is generally unclear to what extent collusion among the block producers does occur, circumstantial evidence points to a problematic consolidation of the network that appears to be rooted in the fundamentals behind EOS: a governance with an intransparent, poorly understood voting market, aggravated by the use of a dPoS consensys system with incomplete incentive allocations.

This problem is, however, not restricted to EOS alone, but appears to be an inherent problem of dPoS blockchains and is generally aggravated by custodial ownership of tokens (e.g. via exchanges). As the largest dPoS blockchain, EOS naturally encounters the highest amount of scrutiny and must identify and adopt pioneering solutions."

The voice team has announced that the beta coming on February 14 will be limited only to the United States. According t...