IBC: The Key to Limitless Scalability of Blockchain? 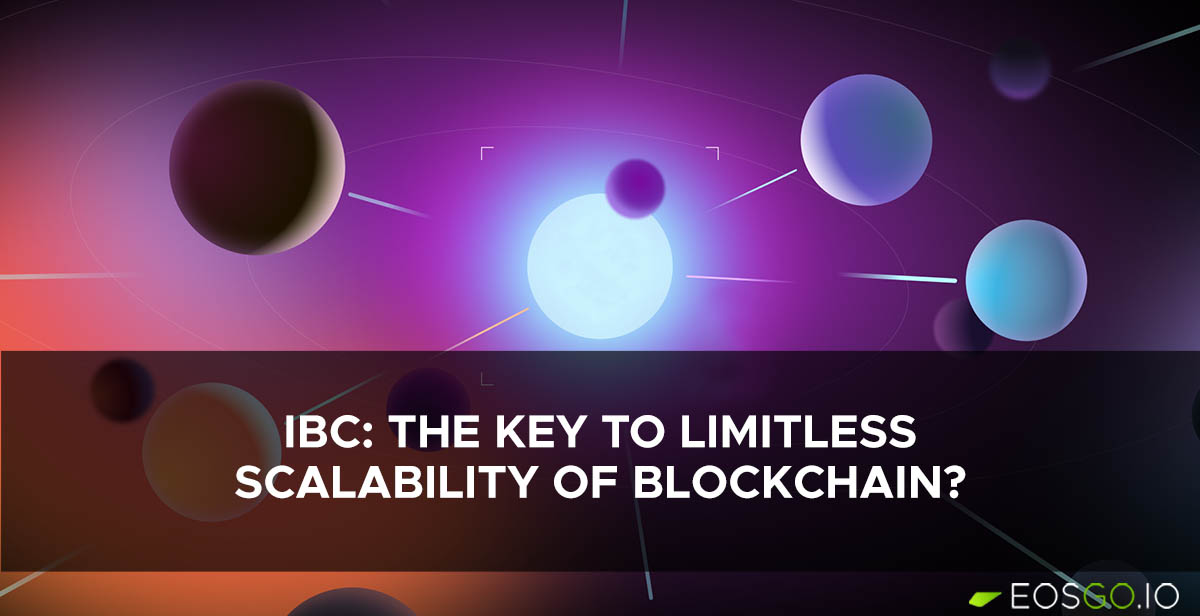 Decentralized blockchain technology has been around for thirteen years now and it has seen incredible advancements in its implementations since Bitcoin in 2009. Thirteen years may seem like a long time, especially for technology, but for a technology of this nature thirteen years is a very short time.

To put things into perspective;

The first electric car was invented in the early 1800s, and over two centuries later the technology for electric cars is still being innovated to try to make it a more viable option for mainstream use.

It took the internet roughly thirty years to go from a private network (intranet) for the military, to finally being commercialized in the early 1990s. It would be another decade before the internet became a mainstream technology used by millions of individuals, businesses, and organizations globally.

Coming back to blockchain technology.

It is impressive to see what it has been able to achieve in its short existence. It is being used by tens of millions of individuals globally, it has already been adopted by government entities, businesses, and entire countries. Yet, it is far from becoming the mainstay of the internet.

It has become apparent that blockchain technology will inevitably have a big impact in the world. Thus it is crucial that innovation is fostered in order to provide a secure and reliable infrastructure for communication, banking, commerce, and other transactional activities. However, like the technologies before it, blockchain will need to overcome certain obstacles and push through current limitations in order to be mainstream and become the default layer for the internet.

The same things that have led to the impressive innovation within the blockchain industry are the very things that also hold it back from reaching mainstream status. According to data from CoinMarketCap, there are now close to 21,000 cryptocurrencies in existence. That is, thousands of blockchain projects each trying to do blockchain business better than the other guys. At least that’s the claim. This is the leading reason for the industry’s rapid growth. But it has also been the reason for its delayed adoption.

Having tens of thousands of developers working on thousands of different blockchain projects is less effective, and a cause for confusion, than having those same developers working on a single project. Imagine if everyone worked on Bitcoin instead to give it all the great features that these other projects have. Bitcoin would be faster, cheaper, more scalable, and would probably be mainstream by now. Instead all the energy, effort, and marketing has been diluted to the thousands of blockchain projects elsewhere.

Since Bitcoin is a decentralized network with participants who have different views on the direction of the network, it is extremely difficult to implement any new changes. Ethereum was, at the time, invented to tackle the important issues and fulfill the needs of the market that many in the industry felt Bitcoin couldn’t deliver on. That eventually led to the explosive growth of the industry, with many of the current thousands of cryptocurrencies operating on the Ethereum network. Today Ethereum is faced with the same challenges Bitcoin has - they have limited scalability. A challenge they may have been able to solve by now had they been collaborating on tackling it; for the greater good of the industry.

As I write this, Ethereum has just completed ‘the merge’ - a network upgrade to the Proof-of-Stake (POS) consensus mechanism that hopes to open the door to future scaling solutions. Until those scaling solutions have been researched and implemented, everything stays much the same in terms of scalability. One blockchain may have a higher network capacity than the other but, sadly, limited scalability remains a fact for all decentralized blockchains in the world.

Most promising solution to the scalability issues

Some of the smartest people in the world are building their products in the blockchain space. These people over the past decade have been trying to figure out possible solutions to overcoming blockchain’s issues of scale - network capacity, speed, and costs. When Ethereum launched seven years ago, it was a first-of-its-kind next generation blockchain technology. It didn’t take long for some people to realize that it too wouldn’t scale. So newer projects sprung up to try and build something better.

In 2018, a new innovative project with a different consensus mechanism was launched; delivering greater scalability, faster finality of transactions, and lower costs. EOS was to represent a new dawn for blockchain technology. A new beginning towards technologies of scale, in other words, technologies capable of facilitating mainstream adoption. At its peak, EOS was doing 100+ million transactions in a day, which was eight times the transactions that all the other blockchains combined were doing. Due to recent events which have led to a decrease in usage, EOS has since dropped to 5th in daily transaction rankings.

It has since been surpassed by WAX, a blockchain designed for gaming and the trading of digital assets such as NFTs. WAX was launched in 2019 and uses the same consensus mechanism as EOS - Delegated Proof of Stake or DPoS. Four years on, DPoS remains the most performant and most decentralized consensus mechanism in the industry. Individually, DPoS blockchains are capable of handling much more traffic than most other blockchains combined. How much so if they collaborate?

Earlier this year, a coalition made up of four blockchains, namely; EOS, UX Network, WAX, and Telos, was formed and funded to advance the Antelope protocol formerly known as EOSIO. The members of this coalition had committed a total amount of $8 million toward core development efforts and outreach this year.

In the words of Yves La Rose, the CEO of the EOS Network Foundation:

“This coalition represents a monumental shift in direction for the future of the EOSIO protocol and is a huge milestone for all of the businesses leveraging its technology. The network effect of multiple EOSIO blockchains working together to secure the growth and sustainability of our common codebase and related open source innovations is a force multiplier that will be paying dividends for years to come.”

It seems we didn’t have to wait years to see an example of such dividends because, just five months later, the coalition has made impressive development progress. This includes establishing the Scalability+ Working Group, rebranding the soon-to-be-forked EOSIO protocol, and the recent announcement of the implementation of inter-blockchain communication (IBC) between coalition chains.

That last statement about IBC could be the hidden key and the missing link to unlocking the solution to blockchain’s big scalability issue. Inter-blockchain communication, as the name suggests, enables two or more independent blockchains to securely communicate with each other. This means that multiple blockchains can be interoperable; exchanging messages, data, and other useful information simultaneously with each other.

With IBC, all participating blockchains are interconnected and become part of a larger network. Much like how the internet operates today. The implementation of IBC means that any application (dApp) built on either chain is compatible with the other blockchains within this network. Which means users can choose on which chain they want to connect to their favorite applications, and sometimes that choice will be as a result of which chain currently has less traffic - therefore faster speeds and lower latency and costs.

As each chain has a different interface but similar experience; choosing a chain to connect through will be like choosing a preferred server to play the exact same game being played by other players but on a different blockchain(s). This is what the future of blockchain usage looks like in the mainstream world.

Eventually, all public blockchains will be interoperable with each other, and EOS, Telos, WAX, UX Network will be the first ones to do it at such a large scale. It is even more impressive when you consider the fact that these Antelope-based blockchains are already the most performant and most scalable public blockchains in the world. The introduction of IBC between them might make the resulting network the only blockchain network in the world capable of hosting any mainstream application that exists today.

That would be a selling point that can’t be ignored by anyone planning on building a highly successful app or business on the blockchain. And because all participating blockchains are incentivized to promote the network, it makes it easier for them to pool together marketing efforts. Something this coalition is already familiar with, as I mentioned earlier regarding its $8 million funding for development efforts and outreach.

According to their latest tweet, FollowMyVote is considering to launch a United States Parallel Presidential Election i...