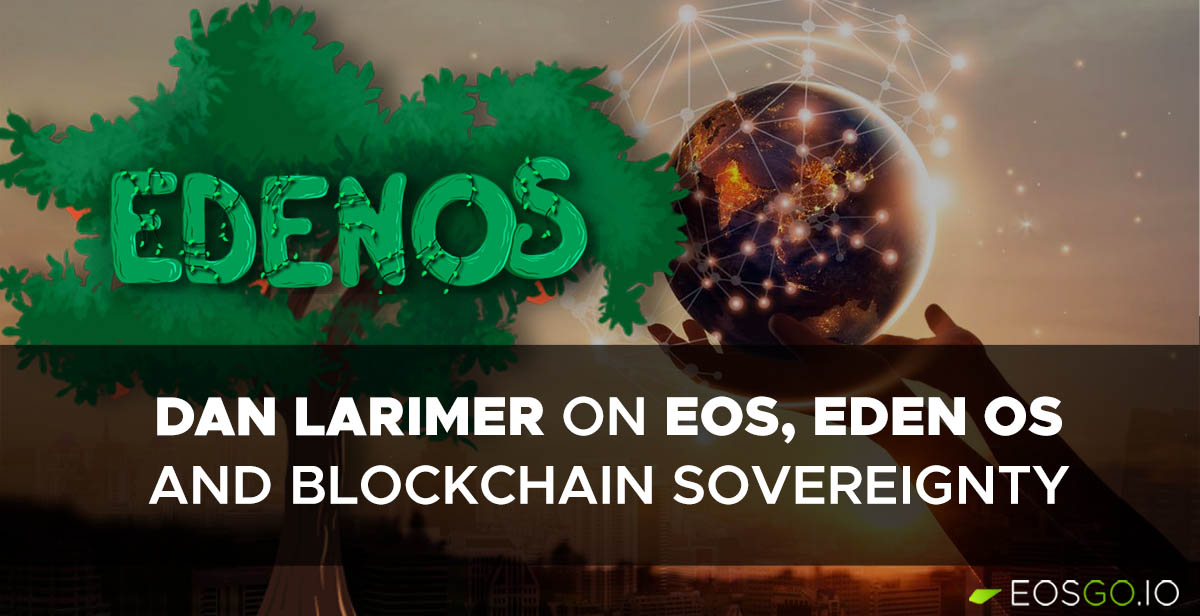 Dan Larimer recently posted a new article on his personal blog, in which he discusses Blockchain Sovereignty, while also announcing important news about EOS, EdenOS and Block.One

"I have been working with the EOS community to utilize the revolutionary governance process from my book to elect hundreds of vetted and trusted representatives to allocate funds to build the EOS ecosystem. We call this governance process Eden OS"

As previously mentioned, a team of engineers supervised by Dan Larimer is already working on the development of the Eden OS platform, which could be launched as early as early summer.

Also, it seems that early reports about Block.One working with the Eden OS team are confirmed. Dan Larimer had a discussion with Brendan Blumer, and Block.One may start supporting Eden directly with the EOS they own.

According to Dan, this move could bring numerous benefits: 1. Decentralize ownership of EOS 2. Prevent the need for inflation to fund community development for at least 7 years 3. Build community unity 4. Create positive momentum for EOS

"I hope that block.one will publicly commit to a plan to fund Eden in order to meet the very real needs of the community for transparency and certainty regarding what they are receiving in exchange for the hundreds of millions of dollars of vesting EOS allocated to block.one when the community launched the chain"

Even if the Block Producers together with the community could decide to create another chain parallel to the EOS mainnet, removing the Block.One tokens, Brendan Blumer has already expressed intent to voluntarily support the Eden community, so this could be an unnecessary and harmful action.

If everything goes smoothly, Eden OS can be released as soon as possible and become in all senses active and integral part of EOS. In this way the EOS community will be able to boast of a completely new mechanism to distribute funding for the development of EOS-based projects, and thus strengthen its services in a completely decentralized way.

"The Eden election process is designed to ensure integrity with several techniques including provably unique real human participation and the vetting of all new members to the community by existing members. This means that the Eden election process is much more immune to common sybil attacks as well as immune from the collusion of insiders to extract community wealth for private gain without consequence."

Recently various Block.One sources seemed to give us some clues about a possible new Block.One venture, focused on Prog...