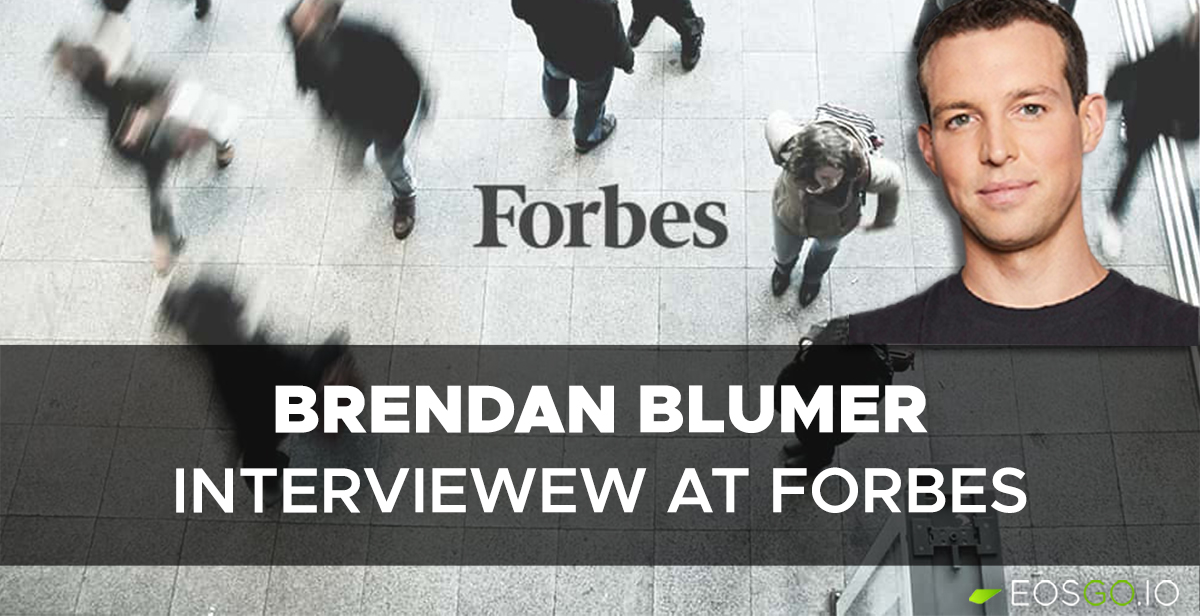 Brendan Blumer, founder and CEO of Block.One, was interviewed on Forbes this week to discuss his vision for the company, how to be an effective leader in the tech landscape and what tools he uses.

Below is a summary of the answers we found most interesting.

What global impact do you foresee as a result of China’s digital currency DCEP and the Blockchain Services Network (BSN)?

Unlike America, in China it is the government itself that helps organizations to innovate with these new technologies.

"One of most incredible things about China, in terms of their economic growth, is how aggressively they pave the way for organizations to innovate with these new technologies, as opposed to America which impedes organizations with regulation."

Coinbase’ Brian Armstrong made headlines recently by publicly stating that Coinbase will be a ‘mission-driven’ company and will no longer tolerate political discussions in the workplace. Will Block.one adopt a similar policy?

From Brendan's response, it doesn't seem that Block.One will adopt a policy as rigid as Coinbase's, even if it understands its reasons. In any case, he confirms that Block.One is always committed to compliance, by following the rules, but with the goal to make a change.

There is an active debate on monetary stimulus in the U.S. Do you think adding more stimulus is the correct path to recovery?

"Stimulus is just another form of tax"

According to Brendan, stimulus is not a bad thing in itself, the problem is how and where the new funds are allocated. Especially during this pandemic, the new funds have been used to support the markets, by driving asset prices up, unfortunately this strategy helps wealthy people and does not redistribute value to those who really need it.

Does Block.one utilize Bitcoin as part of its treasury management strategy?

"Block.one holds just under 10% of EOS in treasury and we also hold a very sizable position in Bitcoin. As loyal ambassadors of this ecosystem, we keep our value in Bitcoin"

You started this journey relatively young. What are some of the challenges you’ve had to face as you stepped into the shoes of a leader?

"As a leader you have to be that bridge that brings everyone together, so that you can assemble in large numbers and scale sustainably."

Brendan explained how the field in which to pay more attention is certainly the legislative one. Indeed, to have no repercussions, especially in the field of Blockchain, it is necessary to make sure to operate with compliance, but in a way that also establishes a competitive advantage.

In addition, to be able to scale the organizations, it is essential to have a strong and right corporate culture, which can be shared by all members of the company. Besides knowing the best practices of scaling organizations, for that he is getting insights from Block.One's new advisor Marty Chavez, former CIO of Goldman Sachs.

In 2017, when a community member asked Daniel Larimer why is EOS better than ETH. His response was: > EOS can run ETH ...