This Week: Epic Developments in the EOS Ecosystem 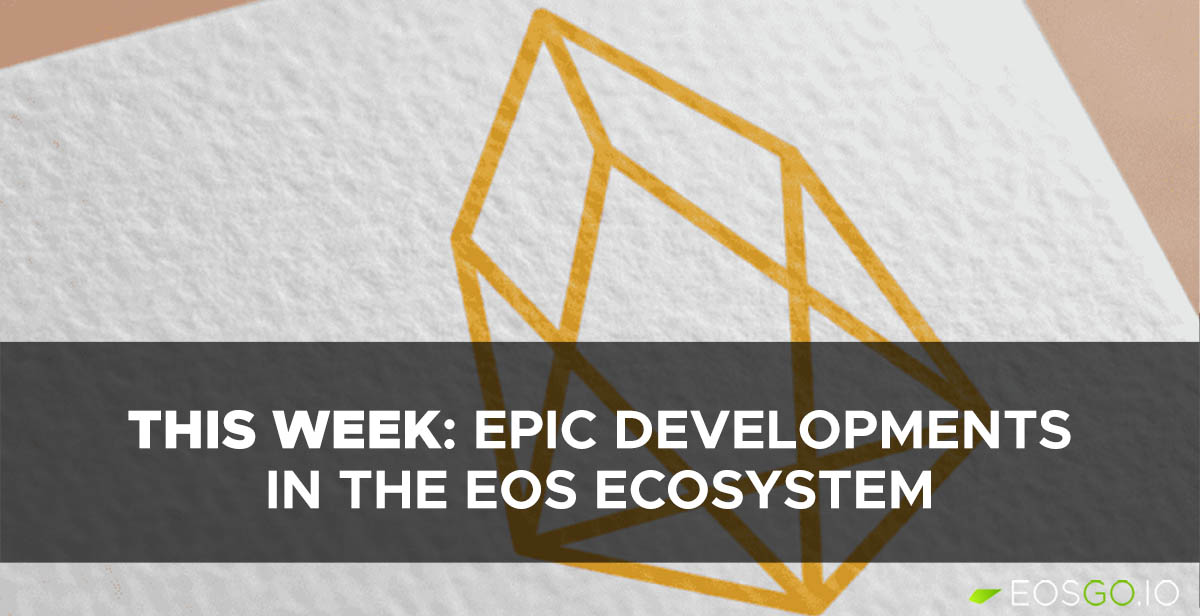 It has been a tough week in the crypto market with all cryptocurrencies dropping in price by an average of 15% as the market experiences half the daily trading volume of the previous week. Amidst this EOS has, for the first time in 3 weeks, witnessed a weekly drop in price of 14.2% - down to $2.40 from last week’s $2.82.

Outside the markets, the EOS ecosystem has been lively with activity and different initiatives directed towards making EOS a formidable competitor in the industry.

Early on Monday, VentureBeat covered a story on EOS recognizing how it is “on the frontlines of the blockchain revolution” following its heated battle with Block.one.

“After being on the sidelines for over four years, EOS Network, the third-generation “lightning-fast” blockchain network, is back. The network was quite literally resurrected by its own community — yet another testament that decentralization is indeed “power to the people.” - Reuben Jackson (VentureBeat)

In another initiative funded by the ENF, the Eden elections concluded last night and 5 Chief Delegates were elected as representatives of the Eden DAO (Decentralized Autonomous Organization). The new Chief Delegates are Brock Pierce, Michael O’Sullivan, Chuck MacDonald, Gracie Lau, and Edgar Fernandez. With the latter being named as the Head Chief.

To top off a great week, EOS, Telos, WAX, and UX Network blockchains jointly announced their collaboration in funding to advance and rebrand EOSIO, which is the core protocol underlying all four blockchains.

“This coalition represents a monumental shift in direction for the future of the EOSIO protocol and is a huge milestone for all of the businesses leveraging its technology. The network effect of multiple EOSIO blockchains working together to secure the growth and sustainability of our common codebase and related open source innovations is a force multiplier that will be paying dividends for years to come,” - Yves La Rose (CEO of the EOS Network Foundation)

As of writing EOS is currently trading at $2.40 (down from $2.82 last week) with $304 million in daily trading volume and a market cap of $2,357,393.472 and has fallen out of the top 50 on CoinMarketCap. This is cause for concern for some, while for others it represents a buying opportunity.

In what seems to be a snowballing effect - weeks, months, and years of pent-up energy is steadily revealing itself in t...

The LiquidApps team released an article on Medium discussing how through the DAPP Network, all blockchains can become m...