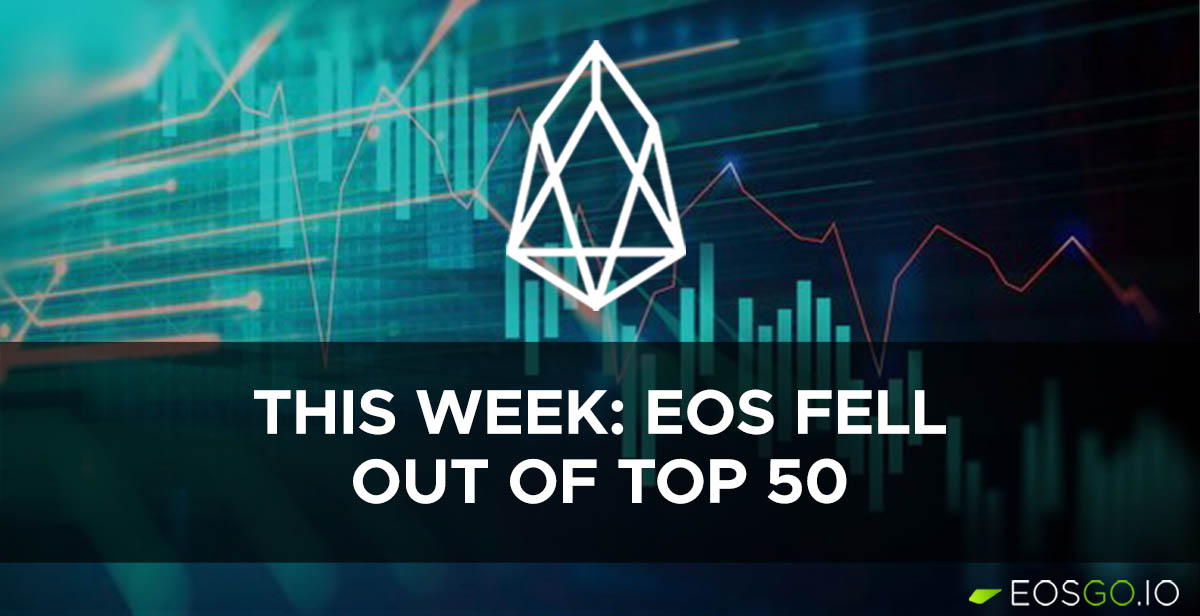 In a continuation from the bearish trend that entered late last week, EOS’ price performance has had yet another tough 7-days at the markets. For the first time this month, EOS has dropped out of the top 50 highest market capped tokens on CoinMarketCap, slipping from 49th to 52nd currently. This comes as $RUNE and $ZEC both had a +25% week, jumping to 48th and 49th respectively.

An extended bear market could see EOS slip even further down as tokens with less daily trading volume tend to pump higher than those with higher volumes. Current general market perception and sentiment around EOS isn’t helping its case either.

$EOS is currently down 91% from its all-time highs, which is not something the market considers a viable investment. A lot still needs to be done to encourage a more positive market sentiment and for EOS to showcase its value to potential investors.

If there are any positives from EOS flirting with the $2 price point and being down over 90% from all-time highs, then it must be that there isn’t much further down it can go whereas the upside is limitless. And if only a core following of believers and token holders remain, then it seems more likely that the only way to go from here is up.

*Will EOS continue to stagnate around the $2 price point for the weeks to come? Or will it find a way to turn things around at the markets, and if so, how?*

That’s a question that’s surely on everyone’s minds now, and sadly every time it seems things are turning around; EOS takes another knock further down. It’s no wonder when you consider that the market is looking for the next big project to invest in. Unfortunately, EOS is perceived as ‘the old project that failed to deliver’. Overcoming this stigma is not an easy task as the past years have shown.

However, since the community established the EOS Network Foundation, a lot of work has and is being done to overcome that stigma – like getting rid of dependence on Block.one, the funding of projects to help grow and strengthen the EOS ecosystem, among many other activities.

For the most part, the sentiment with the EOS community remains hopeful of the future. Hopefully, this revampment of its network will get done in time to still be relevant in the ever-expanding market.

In this week article, Cryptomandate explains you how the EOS blockchain managed to shift from a gambling dApps focused ...

In just one month the new beta of Voice will be launched, adapted for a completely new experience centered on the first...