EOS and the Bear Market Blues 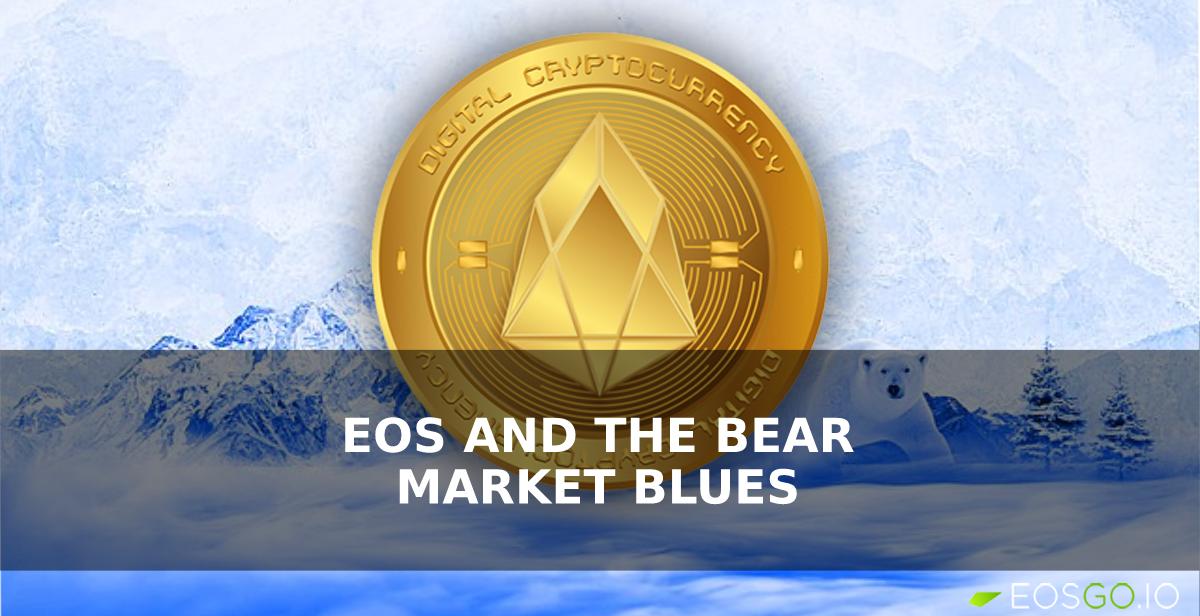 ‘Blues - a state of depression or melancholy.’

We are going through the most dreaded phase of a market cycle - the bear market. During a bear market there’s a floating sense of low spirits and anxiety regarding the expected outcomes of the market in the foreseeable future. The lowest point for investors and speculators in a bear market is when it has persisted for an extended period with little to no relief from the downtrend. This is when everyone is already thinking, anticipating. and speaking about further pain to be doled out by the market.

Interestingly, this is usually around the time that the market begins to make a turn for the better. Or at least close to it. The thing about the market is that it tends to do the opposite of what the majority expect it to do, as if it were some kind of ancient law. So ancient in its truth that it continues to be the single most accurate depiction of winners and losers over the long run.

Investing (financially), like many other competitive fields, is purposely designed to have winners and losers; it’s how capitalism works. Whether you hate it or love it; capitalism is the major reason that society has progressed at such an incredible pace. The idea that if you work harder and smarter over everyone else then you’ll be duly rewarded is what drives innovation. This competition has led to great inventions and processes that make life better for the individual and society as a whole. So when the market decides not to be competitive anymore, then those who go against the current market trend are generously rewarded.

It is a balancing act. If everyone is anxious about the future and chooses to be cautious, then they share in the same spoils that result from such a decision. That leaves the very few who go in the opposite direction to gain bigger shares of the spoils on this opposing side. The market then realizes the disproportionate share of the spoils and everyone moves to the side with the bigger share of returns, or the least losses. Then the cycle repeats.

Similarities in the cryptocurrency market

Then there are the similarities that the stock market shares with the crypto market. Although regulated, the stock market operates in similar ways to the cryptocurrency markets. For one, both have buyers and sellers who constantly engage to try and outperform everyone else in terms of profit. Secondly, crypto and the stock market both have market participants who invest in a coin/stock for its value in the longer term. Thirdly, but not last, both cryptos and stocks represent some type of ownership to the underlying company or blockchain network. All these similarities are why a great number of crypto and stock investors participate in both markets.

However, in my opinion, the cryptocurrency market is more valuable than the stock market from an investors perspective. Crypto, or rather its underlying technology, blockchain, is an innovation that is going to be the underlying layer to everything that requires censorship resistance, transparency, and many other vital qualities on the internet. Undoubtedly the biggest obstacle to seeing that become a reality sooner rather than later, is blockchain’s ability to massively scale and remain secure. The best solution to blockchain scalability at the moment seems to be inter-blockchain communication, which I've written about in depth in a recent article.

In my experience, the best way to approach the bear market as an investor is to look for value where others aren’t looking. This is because most investors are busy pondering on their losses rather than focusing on finding opportunities, of which there are many during a bear market. Panic and mass hysteria fills the market during a bearish phase leading to mass sales of every asset, regardless of their underlying value. The opportunity here is to find those that are massively undervalued as a result.

Over the past years I’ve realized that undervalued assets during a bear market are those that still seem objectively bullish despite the mass hysteria. Those that go against the grain and focus on being valuable to stakeholders; the same value you’re looking for as an investor.

Investing in the cryptocurrency market as a whole is generally a good idea during a bear market because the industry remains bullish for the medium to long term. But for people who aren’t financially armed with enough funds to invest across the entire market, they need to strategically pick out their targets. With the aim being to spot assets that show promise for a bigger return on investment when the markets inevitably turn bullish again.

EOS has remained bullish during this extended bear market

Generally the easiest way to determine whether a project is bullish or not is to look at its roadmap and the team's proven ability to hit milestones within the given period. There are already dozens of projects in the cryptocurrency market that have great roadmaps and are driven by teams with the ability to deliver on time. However, most of their roadmap milestones are far and wide in between. That’s where EOS is exceptionally different.

Based on the basic requirement of a great roadmap and a team that’s capable of hitting milestones on time, then EOS hits the bullseye. Except EOS goes much further than this basic requirement by having not only a couple, but multiple milestones within any given month or quarter. Then there’s the occasional surprise announcements of new milestone targets being added to the currently ongoing roadmap. For instance, the following roadmap doesn’t even include some of the EOS Network Foundation’s initiatives like the upcoming ENF Ventures. 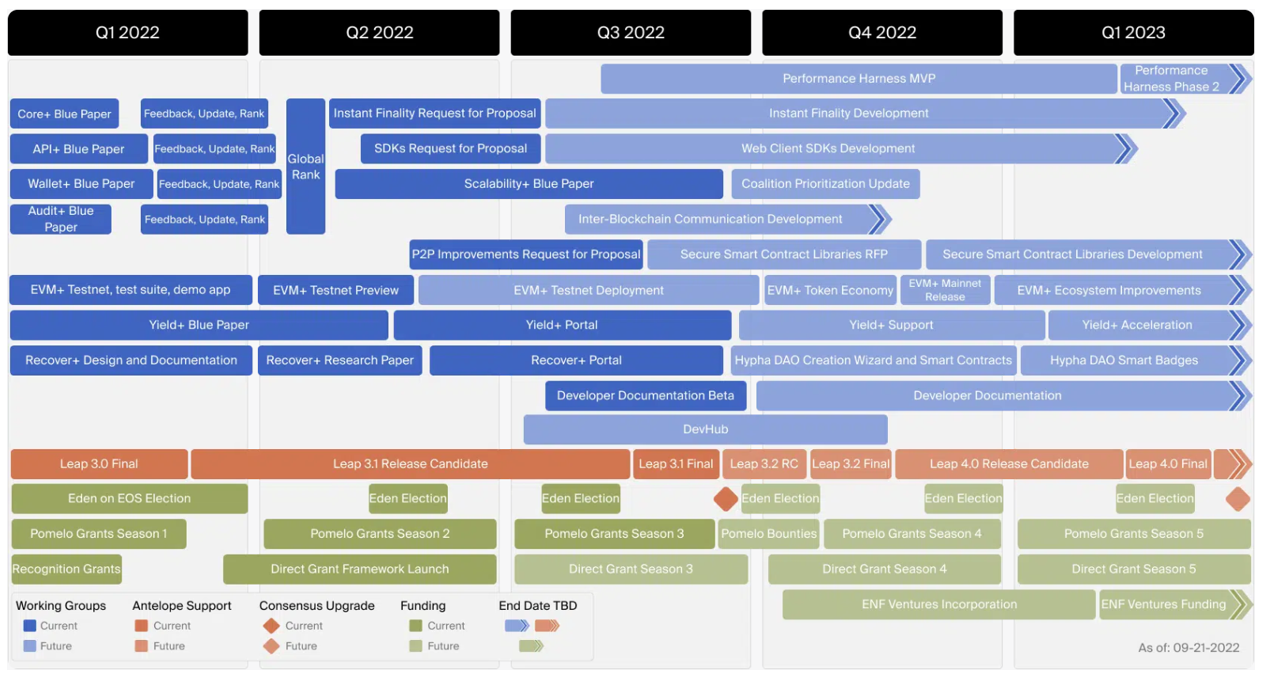 Looking at the roadmap above it’s not hard to figure out that EOS is probably the most bullish project in the industry. The roadmap contains new funding, DeFi, and EVM initiatives among others. All of which are extremely bullish in incentivizing developer, investor, and user adoption and growth over the coming months. It’s not just the quantity and bullishness of these development milestones that are impressive, but the speed at which they are being completed. Oftentimes completed well ahead of schedule.

For the first time since the ICO four years ago, there are now efforts to market EOS globally to bring in more participants (users, developers, and investors). Right now EOS representatives are attending global blockchain events to spread the word about the many new positive changes that have occurred in recent months. Since the beginning of September, these EOS representatives will be at 20+ blockchain events across the globe. Again, this is something EOS hasn’t seen in more than four years.

Whether it is with the stock market, or during the Wild West nearly two centuries ago, the game remains the same - be willing to take risks and go against the grain. Only those willing to go where others aren’t will find the riches that no else finds.

During times of market turmoil, those who keep their heads and avoid the mass hysteria make their way out of it far ahead of everybody else who’s slower to catch on.

Although EOS still has its risks like any other crypto asset in the world, from what I’ve seen, EOS remains the hardest working, fastest, and most productive network in the industry. And that’s something only a few investors in the industry are wise enough not to bet against.

After all the misinformation that is published daily against EOS, this article analyzes all the factors that determine ...