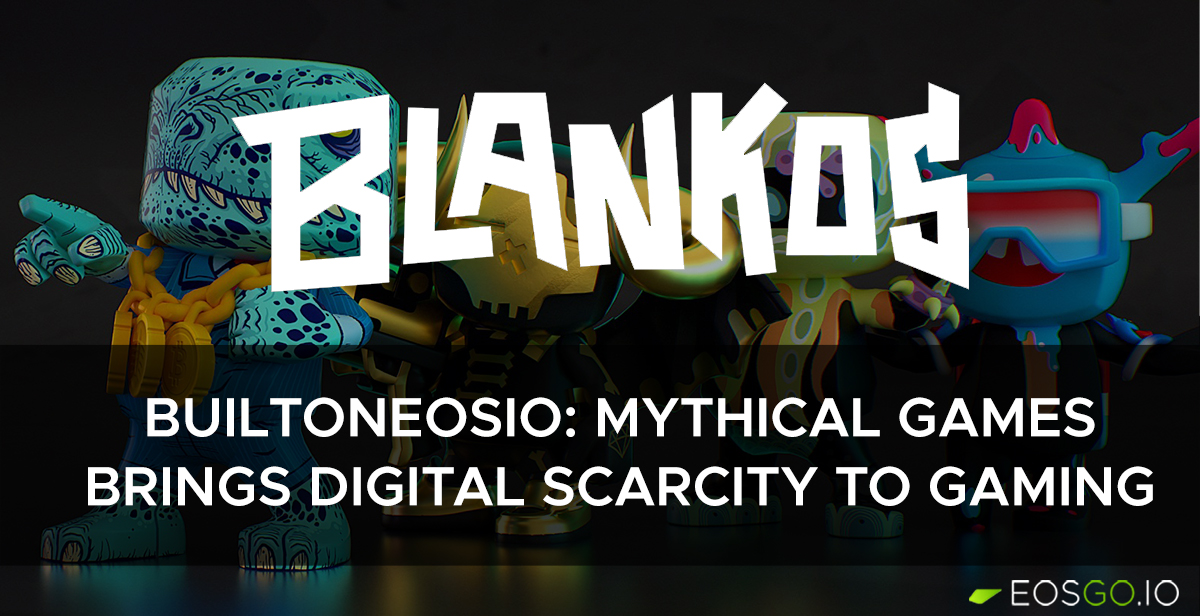 “We got really excited about ways we could leverage blockchain to challenge the way game economies were being designed. We saw a natural fit with what blockchain was introducing and with where the games industry was going.” - Rudy Koch, Mythical Games Co-founder and SVP of Business Development

Mythical Games is a gaming company acknowledged by Forbes as one of the Disruptive Technology Companies To Watch and led by gaming industry veterans. They are specialized in building games around player-owned economies, and moreover funded by Galaxy EOS VC.

Their first game, 'Blankos Block Party' is an MMO where players can compete in mini games, create their own game play and collect digital toys called Blankos, built over EOSIO. They also recently launched the first Blankos "Founder's" collection, which can be purchased from their website for a limited time.

“Players can compete against each other in minigames in this open world stylized after a giant street block party. Each player-owned block is highly customizable, and they can create their own racing, collecting and shooting minigames to share with friends and the wider community.” - Rudy Koch

The driving force of Blankos, will be the Player-Owned Asset Economy. Within the Blankos World, in-game items, such as skins, accessories, and emotes, will be blockchain-based using the EOSIO protocol. In this way, players will actually own such tokenised assets and will be allowed to buy or sell them at their own discretion also in secondary marketplaces.

“From there, we can lean into the concept of true ownership by facilitating things like secondary markets, where players can sell items to each other. The result creates some unique new opportunities for monetization and revenue for players and content creators.” - Rudy Koch

In order to provide an optimal gaming experience for its players, the Mythical Games team has developed from scratch a new Non-Fungible Tokens (NFTs) standard that can be integrated into EOSIO blockchains: "dGoods". More recently, they have teamed up with Block.One to offer assistance in the brand new Blockchain-as-a-Service (BaaS) for game' backend integration.

“Nobody knows EOSIO better than Block.one, so to work together is definitely amazing. We need people who are experts in every aspect of what we do. We’re experts in games and Block.one knows EOSIO inside and out, so it makes perfect sense to put our heads together to solve this.” - Rudy Koch

This November Mythical Games plans to launch Blankos to the first Beta players, i.e. all those who will buy at least one Blankos from Founder's collection. The first step that will open the doors of the blockchain within the mainstream gaming space.

Block.One released support for the WebAuthn Protocol, which will enable seamless and more secure blokcchain transaction...