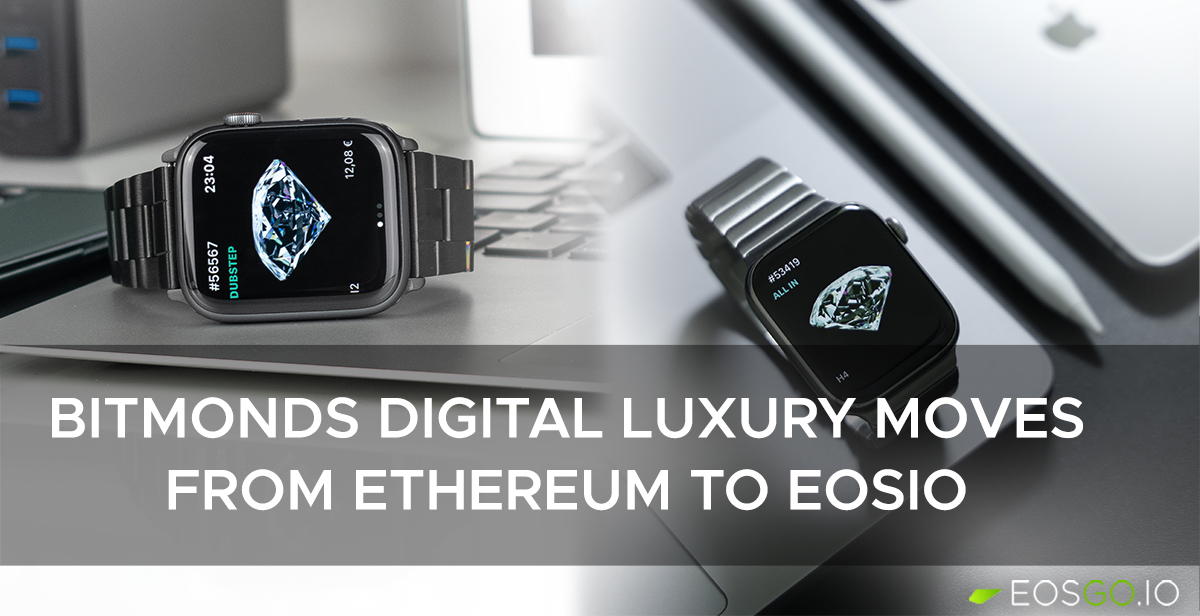 dApps are steadily moving from Ethereum to EOS, this time it's the case of Bitmonds, a Digital Luxury Collectibles that exposed the difficulties to run a business on Ethereum, preferring EOSIO.

Bitmonds are Digital Collectibles that appear as 3D colored diamonds. These are characterized by a unique and progressive ID number, a color, a name and purity characteristics. In addition, they can also be worn in their users' Smartwatch, thus becoming true Digital Luxury Collectibles.

The team decided to move away from Ethereum, mainly because of the delay in the release of Ethereum 2.0. Indeed, many projects on Ethereum are waiting for the transition from Proof of Work (PoW) to Proof of Stake (PoS) because now the fees that are paid by dApps on Etheruem to send transactions have become unsustainable. Moreover, through Mining Pools, today only 3 subjects can control more than 51% mining power of Ethereum.

Lately, miners have been able to earn over $500,000 in a single hour through fees paid on Ethereum alone, and many suspect that the miners themselves are sending spam transactions to keep the transaction fee price high.

The solution would have been to upgrade from Ethereum to Ethereum 2.0 with a PoS system, unfortunately due to numerous technical problems, the upgrade has been postponed for over a year. For this reason the Bitmonds team has started its transition to EOSIO, and surely many other dApps on Ethereum are looking for new options beyond Ethereum.

"The situation of Ethereum, if not managed with speed and immediate technical choices, will probably rewrite the future scenario of digital collecting projects, many may not survive, even among the best known."

The team opted for EOS because of its proven performance, indeed, it is already able to manage more transactions every day than the sum of all the other blockchain networks.

The EOS system is based on a version of Proof of Stake, known as Delegated Proof of Stake (DPoS), designed by Dan Larimer, the CTO of Block.One. Through this system there is no fee system for transactions as on Ethereum, but dApps can borrow resources to send transactions, even on behalf of their users, paying a monthly fee to token holders who make their tokens available. This also solve ecological problems arising from Proof of Work, as no electricity is wasted for the sole task of solving complex mathematical problems as in Proof of Work.

"It now seems clear not only to us how EOS.IO network is becoming one of the next breeding grounds for future projects."

The team has already proceeded to organize the resources to manage its transactions and carry out the Bitmonds transition. In the coming months they should already have a live function on EOSIO.

Recently the twitter account of Weiss Crypto Ratings, a rating site of cryptocurrencies, stated that "Cardano is clearl...

### Preface *DeFi is an open and global financial system built for the internet age – an alternative to a system that'...