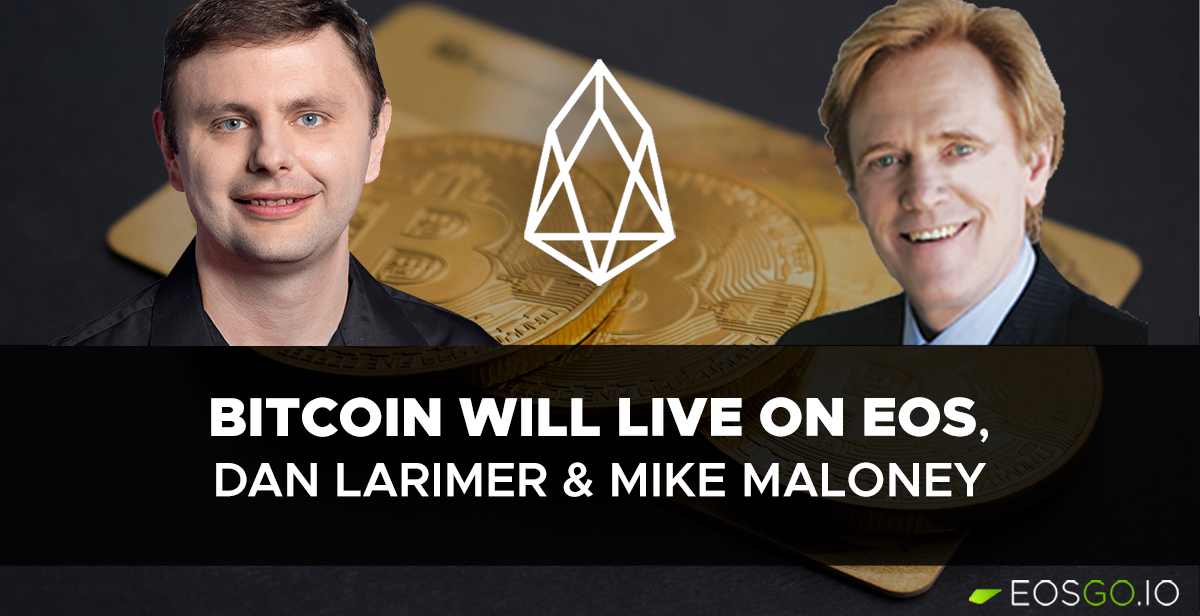 "In the future, Bitcoin is going to live on the EOS Network", said Dan Larimer, CTO of Block.One, in an interview with Mike Maloney, the "Freedom Persuader", in which other interesting topics were also discussed.

The interview covered many topics, starting with the experiences of Dan Larimer, renamed by Mike the "Freedom Engineer", discussing (Block.One's?) future plans to move Bitcoin to EOS to make it more scalable, up to Decentralized Finance (DeFi) and Individual Rights & Freedom.

Bitcoin is going to live on EOS

"I want to highlight that it's possible to move bitcoin into the EOS network. In fact you could create an entire bitcoin client inside a smart contract. Just like we can run all of Ethereum we can run their smart contracts emulated within EOS faster than they can be run on Ethereum itself. We can both emulate these chains and move their currencies on there.

What that means is that in the future Bitcoin is going to live on the EOS network and they're going to be transacting on exchanges and smart contracts and doing all these things, trading against EOS natively and that is that's the power of having a programmable high performance chain. You can kind of become the hub of all activity across all the other chains because yougot fast settlement and decentralization in one spot."

These statements reflect Block.One's recent activities in participating heavily in Bitcoin mining. As we recently reported in an EOS Go news: Block.One Bitcoin Mining Solution Powered by EOSIO, BTC soon on EOS?, Block.One will begin mining activities on Bitcoin powered by EOSIO in 2021.

"The reason why EOS is my largest investment in cryptocurrencies is because it can do almost everything that any of the other cryptos can do but many of those cryptos are limited to a specific function or a set of specific functions."

"let me just recap this again for the audience. So you divide the entire country up into small groups of ten. Everybody can participate if they want, you don't have to participate but you're only going to be dealing with nine other people that you have to meet with over the process of a month and pick one of you.

This is the playoffs, it does repeats the same process where they each have to pick one of them so if you want to be the president you have to convince the other nine people and then you eliminate ninety percent of those and it takes roughly eight levels to get a president. Fewer levels to get congress and senate, fewer levels that for uh local state.

So very efficient but because it's so small 10, the media isn't going to spend a ton trying to influence you. They don't know what your discussion is so they can't go and try and slander one person or manipulate their tweets, choke off their youtube access or take down their wikipedia page or whatever.

So you're not going to get vote corruption because when there's only 10 people casting votes at each level how can you corrupt a vote of 10 people. It can all be recorded on the blockchain verified and proven and there's no possibility of somebody voting twice."

The CEO of Voice, Salah Zalatimo, announced on Twitter the closure of the social network for the next three months, whe...