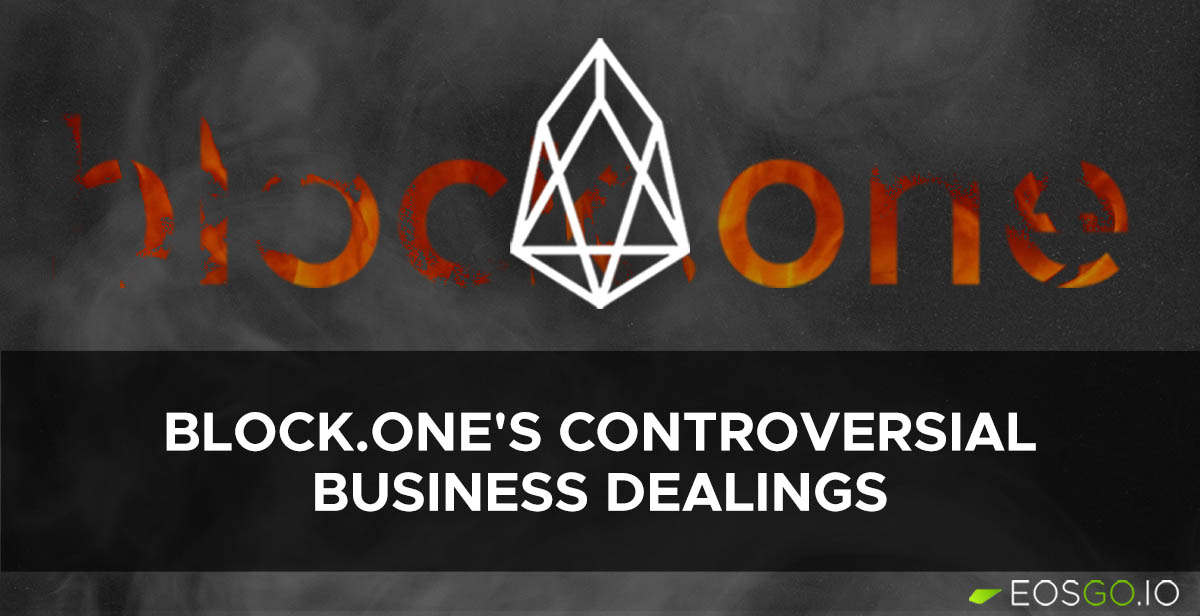 This is a saying that’s used to point out that if something bad is being said about someone, then there’s most likely some truth to it. In what has transpired over the last couple of years, this saying rings ever so loudly when it comes to Block.one’s actions and words. The record speaks for itself regarding the multi-billion dollar company.

When a longtime member of the EOS community (@rektkid on Twitter) shared a research report(https://twitter.com/rektkid/status/1505945449244639238) on Northern Data AG that stated the company had defrauded investors and that it has been conducting fraudulent behavior, I could hear the ringing in the distance. Then Brendan Blumer’s name (CEO of Block.one) was mentioned in the report and all the bells went off. A bit more research down the rabbit hole and suddenly Northern Data AG sounded a lot like Block.one.

[FYI: Northern Data AG is a company that develops and operates global infrastructure solutions in the field of High-Performance Computing (HPC)]

The two companies, Block.one and Northern Data, have close ties, not only with each other but also with EOS/EOSIO. In a press release in July, 2020, Northern Data announced it had gotten backing from a Bitcoin mining operation that’s backed by Block.one. Brendan Blumer at the time was quoted as saying:

“Block.one's focus on leveraging EOSIO to bring increased scalability and transparency to the greater blockchain industry led us to Northern Data and their strategic market positioning and strong leadership. We're excited to be collaborating with them to introduce unprecedented Bitcoin mining solutions, powered by EOSIO."

A year later, August, 2021, Northern Data announced the acquisition of Decentric Europe BV from Block.one, a company with roughly 223,000 GPU cards installed on more than 24,000 high-performance server systems. This sale was said to amount to €195 million in cash, as well as €170 million in new shares. As a result, Block.one held an interest of approximately 18.2% in Northern Data.

Despite all these developments involving bitcoin mining and Block.one, the EOSIO community is still yet to see these so-called “bitcoin mining solutions powered by EOSIO” come to fruition. Yet again it seems a group of investors have been swindled by the smooth-talking, no-action Brendan Blumer and his company. And yes, yet again Block.one has been the only one to benefit from yet another ploy.

A prelude to what had just unfolded:

“Block.one is building products designed to leverage our Bitcoin as more than just a store of value, and we have accumulated well beyond our previously announced 140,000 BTC position. We are in internal testing and alpha stages”* - Brendan Blumer (Dec, 2020)

This bragging about holding more bitcoin than nearly every other large corporation, country, or wealthy individual on the planet, has served Block.one well. Not so much as a drop for the EOS community. More on this later on.

Coming back to the research report by Ningi Research. As alluded to earlier, the report claims that Northern Data, which Block.one has a 18.2% interest in, “defrauded investors and acted in a fraudulent way to enrich a small group of shareholders and company insiders, which led to concealed insolvency.” The report goes on to state that with the help of several holding companies, major shareholders such as Marco Beckmann, Christian Angermayer, Mike Novogratz, and Brendan Blumer, among others, used several means to pump and dump the company’s stock. As well as, using exclusive capital increases to enrich themselves of more than €900 million

Brendan Blumer indeed seems to be closely affiliated with Christian Angermayer. During the EOS ICO days at a DLD Conference panel discussion, Christian, just before interviewing Brendan whom he had ‘pushed to attend the event’, introduced him as ‘one of the most fascinating persons he’s ever met, and certainly the most fascinating person in the blockchain and crypto space’. What Christian didn’t mention though while promoting Block.one and the EOS ICO was that he himself was an investor in Block.one.

As for Brendan’s relationship with Mike Novogratz - Mike too is an early investor in Block.one. In early 2018 Block.one and Mike Novogratz’s Galaxy Digital also announced a joint venture; the $325 million Galaxy EOS VC Fund. The fund was established to invest in startups that would build their products in the EOS/IO ecosystem. Meanwhile Galaxy Digital sold its shares in Block.one reported to be worth $71.2 million, making a 123% return on their investment. Four years later, almost all of the Galaxy EOS VC funded startups have gone on to build their products on other blockchains rather than within the EOS/IO ecosystem.

In the meantime, Cryptology, a different company founded by Mike Novogratz alongside Christian Angermayer, made an investment into Block.one, the company in which Brendan Blumer happens to be the CEO. Further asserting itself as one of the largest backers of Block.one with a 4.9% holding in the company. These three personalities are once again connected through investments in their latest business venture - Bullish Global, a 10 billion-dollar cryptocurrency exchange.

The claim made by the Ningi Research report that these three individuals are involved in fraudulent, pump and dump schemes in Northern Data marks yet another accusation in a long list of accusations. Something the EOS/IO community knows very well about as it has also fallen victim to such actions from these individuals through their various connections to Block.one.

While the EOS community (token holders) was left decimated by Block.one’s ICO, Block.one and everyone involved with the company seems to have made millions of dollars. And the gravy train has kept rolling on and delivering for them.

Not as much as a drop for the EOS community

EOS ICO investors coughed up more than $4 billion to acquire EOS tokens based on propositions that the funds would be used to build and grow the EOS ecosystem for mainstream adoption. The same funds that are being used today to enrich Brendan Blumer and his associates. The same funds they used to purchase the 140 000 bitcoin they now brag about and flaunt for publicity to bring in more business.

Over the years EOS stakeholders must’ve heard dozens of assurances that Block.one’s pursuits would benefit them. However, time and again all Block.one has managed to do is keep plucking one more hole in investors’ pockets through their actions. Because Block.one is perceived as a fraudulent entity within the crypto industry, everytime it makes a big move it reminds people of how those big funds were initially attained. Especially if these big moves further enrich themselves and don’t benefit the EOS investors.

To date Block.one has invested: $1 billion in VC Funds, $150 million for Voice, bought 140 000 BTC, and $10 billion invested in Bullish, alongside partners. None of these were of benefit to EOS and its stakeholders. Rather it can be pointed out that all of these were blows to EOS as they underwhelmed the expectations of market speculators and saw them sell their tokens at each stage. In other words, each of Block.one’s successes were detrimental to EOS sentiment as a viable long term investment.

For instance, on April 20, 2022, Bullish announced the addition of Chainlink and Litecoin cryptocurrencies on their exchange - showing no pairing to the EOS token where EOS investors would have assumed, or at least hoped, that all token trades would exclusively be paired with EOS. It seems that once again Bullish won’t be as much of a benefit to EOS as any other centralized exchange on the market. For those who had high hopes of Bullish being anything other than a cash cow for Block.one, this surely marked another selling event that saw the already vulnerable EOS price slip further down.

Following Block.one’s announcement of the launch of Bullish, reports had surfaced with new information alleging that Block.one was involved in a price pump scheme during the EOS ICO. And these were exactly the scandal’s that gave EOS a bad name and destroyed any credibility it may have in the market. Block.one and its associates have histories of market manipulation and moving forward this puts EOS in an unpredictable situation as history could repeat itself.

As I am researching for this article, Iconic Funds, a crypto asset management company that seems to have ties with Brendan Blumer and Christian Angermayer (usual suspects), has announced that it’s launching the world’s first EOS ETP (Exchange Traded Product). In a tweet accompanying the announcement, Iconic Funds CEO, Patrick Lowry, credits both Brendan Blumer and Christian Angermayer.

He then goes on to single out Brock Pierce (early Block.one investor) specifically for the “major developments in the community”.

Pardon me for being the pessimist but we can’t keep doing the same things over and over again and expecting different results. This is just another money making scheme that will translate very little to EOS adoption. Who in the traditional market knows about EOS? And looking at the performance of its price since launch, how many would even dare touch it? I see this as yet another shiny object or carrot-dangling tactic for EOS investors, while Block.one continues to build its empire off their backs.

“Block.one has not kept its word regarding past promises and that both the community and individual EOS users have been harmed as a result.” - Yves La Rose (ENF CEO & Founder)

While the community is scrambling trying to revive EOS and build something very special with it, the idea of Block.one making billions year-on-year weighs heavy on the price of EOS in the market. Most people won’t touch EOS because of its history with Block.one and many others don’t even know about EOS. Until the Block.one issue is dealt with, the market won’t care to invest in a token that’s relying on inflation to fund initiatives and keep afloat while the funds its community helped raise are funding the very same industry/people crypto is meant to disenfranchise.

“We have been disappointed with Block.one’s reaction to our attempts to negotiate a solution following its failure to fulfill its commitments. As a result, we are exploring all possibilities to reach a resolution of this outstanding issue by other means.” - Yves La Rose (ENF CEO & Founder)

When the EOS Network Foundation announced its weighing options to file a lawsuit against Block.one, the story was picked up by every major news outlet in the industry and received a lot of support from the crypto community. People love the idea because it would highlight the power that decentralized communities have to topple traditional systems. Not to mention fighting back against “scammers and rug-pullers” in the industry.

This I believe to be the only way to remove EOS from Block.one’s shadow and to finally be acknowledged by the industry as a decentralized community. Powered by the most performant blockchain in this space, and powerful enough to topple any mammoth task that stands in its way.

● The Curious Case of Block.one, The Company Behind the $4 Billion ICO

EOS Go is proud to release the new article regarding the EOS Governance. In this article we will analyze recent critici...

In their last post, LiquidApps explained in detail how to use LiquidOracles through the LiquidHarmony framework. By usi...