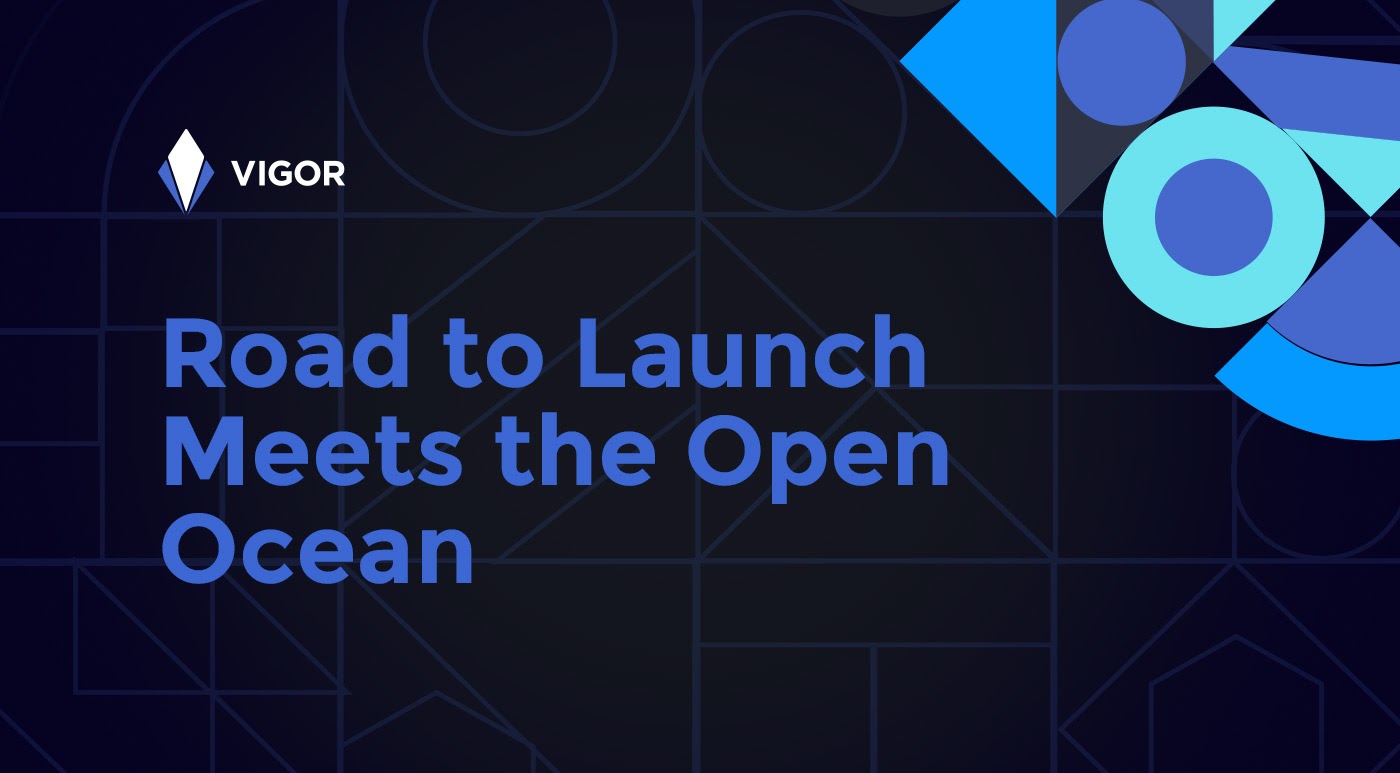 The Vigor Protocol is a decentralized and fully automated borrow, lend, and insure application on the EOS blockchain which allows users to unlock the value of their crypto.

Governance, development, and maintenance is promoted by a DAC, with daily elected Custodians. The Protocol employs a two-token system: the fee-utility token VIG and the low volatility VIGOR token, minted when locking other crypto in the smart contract as a borrower. Insurers can receive rewards by locking crypto in an insurance pool or depositing VIGOR in a savings contract.

Due to the nature of the Vigor Protocol and operations of the DAC structure, launching a full scale application does take many things into consideration to ensure that everything gets off to a smooth full scale public start.

WIthin the DAC structure a lot of passion and ambition has gone into all aspects of the protocol and application by a very dedicated community of individuals offering up their ideologies and services towards progression of the vision outlined and defined by the DAC. And with that many milestones have been reached on the road towards full scale public launch which place Vigor one step ahead of the competition in many respects.

In order of appearance then, here we go with a recap of Vigor’s Countdown to Launch milestones leading up to this monumental day.

The first step was obviously getting some form of the protocol and app usable and deployed to EOS and usable. Due to a number of factors such as zero fee transaction costs, almost instantaneous transaction times, and all around superior technology in terms of speed, efficiency, and cost, Vigor was designed to utilize EOSIO technology and be deployed on the EOS blockchain. Of course, being a responsible financial product brings with it some semblance of checks and balances which therefore led Vigor to deploy on the mainnet first to those already a part of the DAC.

This turned out to be a smooth process and as things were confirmed to be in proper working order the number of people included grew first to encompass anyone with one vote in the DAC and allowed for those that were really keen on trying it out pre-launch the opportunity to stake VIG and in a sense be granted early access.

Stake to Join the DAC

Early on in the DAC building process it was necessary for perspective candidates to read and sign the constitution, create a DAC profile outlining what it was that interested them and how they could be of service to the mission set forth by the DAC to bring Vigor Protocol through the process of launch and out to the public. Although very effective at the time as a stopgap towards limiting spam and or freeloading accounts, it was understood by custodians of the DAC that full decentralization of the protocol and DAC meant that anyone should have the option to join beyond just those that reigning custodians choose to vote for.

The solution: to allow candidates to stake VIG and become a candidate. 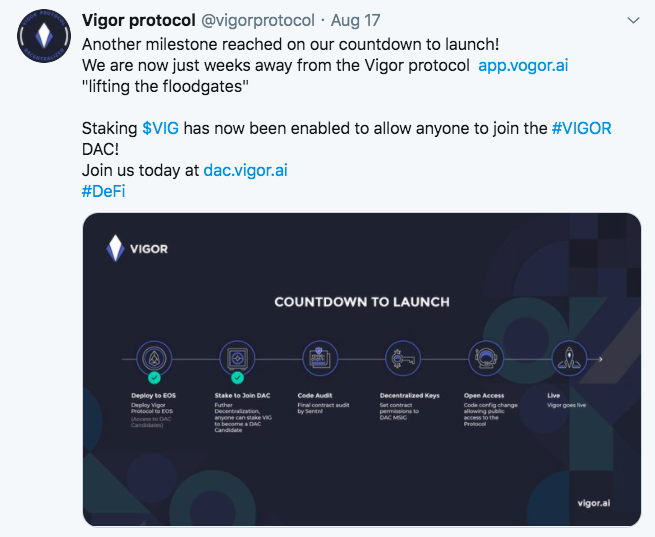 For those then that wish to be a part of something greater and add value to the overall process and structure of the DAC, fear not as all that is needed to throw your hat in the DAC ring is to head on over to the Vigor DAC Member Client at https://dac.vigor.ai/, read and sign the constitution, stake some VIG, and create a member profile expressing how you would ideally like to participate. Of course, as a DAC despite being opened up via staking to all those that wish to join, votes received will still be tied to how involved one becomes with the various working groups within the DAC structure, but at least now membership is by definition open to all beyond a proposal and full scale vote as in the past and truly decentralized.

As reported in EOS Hot Sauce #69, another major milestone in addition to a blockbuster week in general for Vigor whereby Total Locked Value (TLV) exceeded and has since continued beyond $1M USD as well as a listing on CoinMarketCap, the Vigor code audit came back with flying colors solidifying what many already knew about the high caliber at which the project was developed and operated upon. 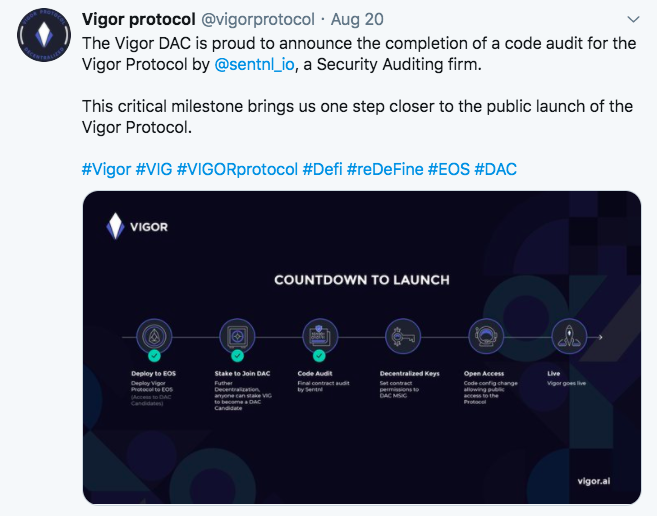 Although the idea of DeFi is that anyone should be able to participate, one of the major issues at present is a lack of standard procuring a platform and code that to the best of its ability is secure. Time and time again exploits in the code of various other DeFi projects have been found that have hit participants hard at the expense of a mere one or two individuals finding a way to ‘game’ the system. Now this is not to say that Vigor is impenetrable, but rather with Sentnl led by the former CTO of EOS42 Charles Holzkampf coming out on record as stating it a pleasure to have completed a security audit for Vigor Protocol and granting a stamp of approval, those using the platform can be confident that Vigor possesses a level of integrity that few presently in the space have been bothered to achieve. Transparency in all aspects of the DAC, protocol, and design of various aspects has always been touted by Vigor as being the utmost of importance, and it is great to see the ambition in proactive validation on as high a professional level that presently exists to bring about a sense of security for both the protocol and those that will embark on utilizing it.

There is no predetermined team, controller, or owner of the VIGOR Protocol. Vigor was born out of the spirit of decentralization through the will of the DAC and the multitude of personalities and members which make it up. Hence having the contract permissions of the Vigor Protocol also decentralized falls directly in line with the reputation on which those who became participants in the DAC put on the line. For development purposes having the keys under multisig control did not make logistical sense, but since the DAC feels confident with the protocol and the code post public testing and audit the time has come to full on decentralize and prove to the public that everything that was built really was for the broader community and much bigger than any singular entity. 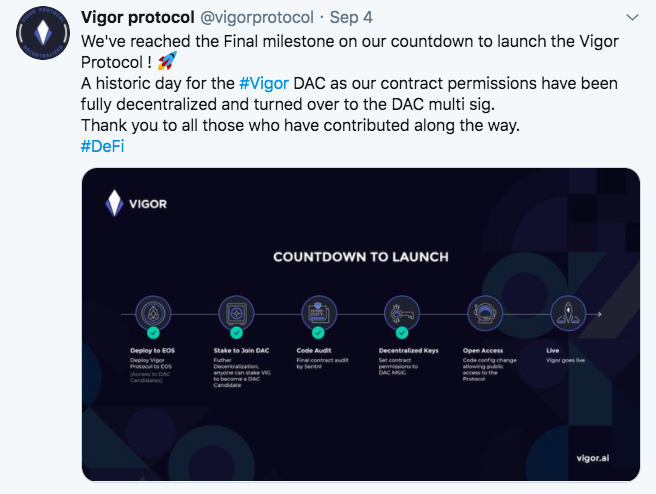 And yes, with all the previous accomplished the time has finally come for the Vigor app and protocol to officially go live and open up to the broader general public. Although it has been a long time coming, it has been with great care that everything has been set in place to have the best protocol that can possibly exist. Some may think that with all the recent hype towards DeFi that Vigor may be late to the party, but the reality is quite to the contrary, for the fact of the matter is that Vigor has been a long time coming and working hard through the process outlined above and then some to be able to bring something to the community with true vision and as flawless as possible execution. 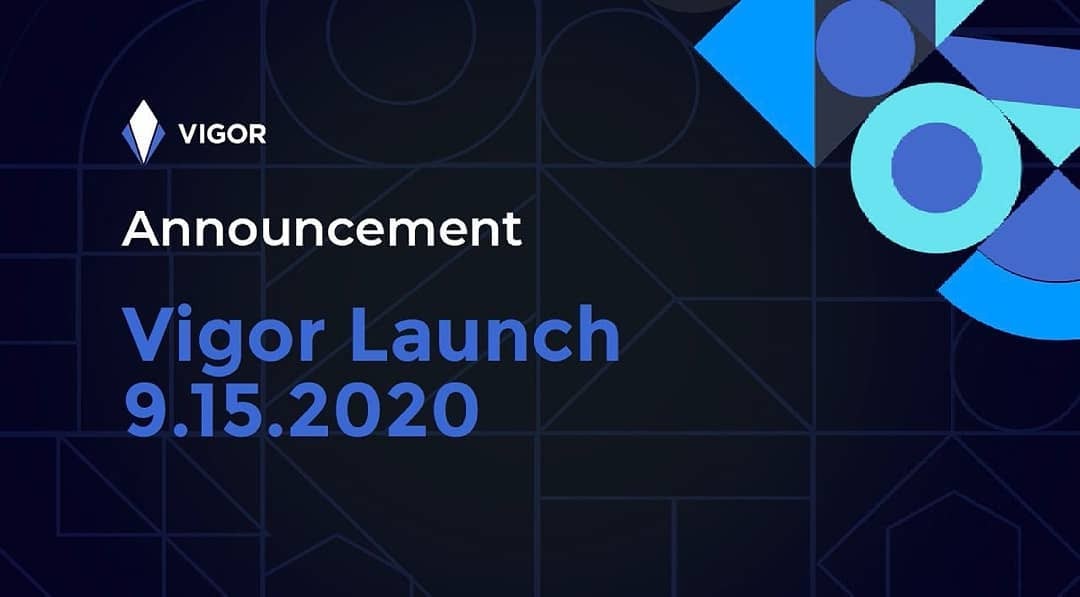 So ladies and gentlemen, please mark this historic day on your calendars, as of Tuesday September 15th, 2020, the Vigor protocol will be live on the Vigor App for all to experience and enjoy.

In order to utilize all that the Vigor Protocol has to offer simply head on over to the Vigor App and login with your EOS Account via a supported wallet. Presently a variety of wallets are supported by the app including Scatter, Anchor, TokenPocket, and Wombat. For those that are new to EOS and are not quite sure how to go about getting an EOS account please check out these handy guides:

The Vigor Protocol DeFi Lending Application (https://app.vigor.ai) can also be accessed in the following languages:

In addition, for those that would like to play around with the app and get familiar feel free to try out all that it has to offer via paper trading on our testnet at https://vigor.ai/features

Article compiled by Jimmy D (kansaikrypto) and translated by EOSGo (poweredbyyou) in service of the Vigor DAC.