Trust EVM - The Fastest EVM In The Industry 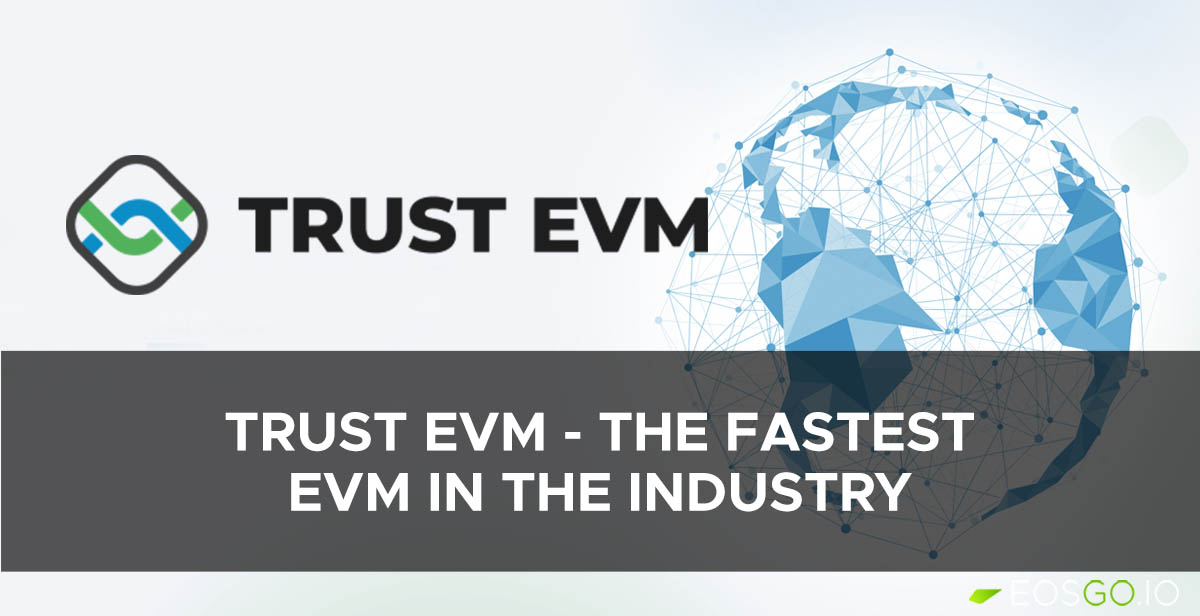 The recent Twitter Space by Trust EVM shed some light as to how it will achieve the feat of being the fastest EVM in the industry. This was an open discussion by members of the project who also answered questions from the community about its technicalities and operations after launch.

Matias Romeo, who’s the technical leader of the EVM+ working group went into details on the progress that’s been made so far, leading up to the scheduled launch in September 2022. The following are some of the more important talking points from the event on Thursday, June 16.

The EOS EVM will not operate native on the EOS blockchain despite the advantages it would gain as a result of the chain’s high performance specs. Instead, Trust EVM will run its EVM state inside a smart contract on EOS.

The reason for this decision was so that the Trust EVM can be efficiently flexible because of the way EOS is designed to operate; it would require all of the EOS node operators to update their software each time a new version of the EVM is released. This will allow Trust EVM to run with as little friction as possible while still leveraging EOS’ high performance (speed, scalability, etc.).

At the same time, the flexibility gained by running its EVM state inside and as a EOS smart contract means it can take advantage of EOS’ smart contract abilities to be updated with newer versions rather than having to deploy an entirely new updated version of the current contract.

Trust EVM has integrated evmone, which is a C++ implementation of the Ethereum Virtual Machine, enabling it to be compatible with EOS’ smart contract language. The codebase of evmone has been optimized to provide fast and efficient execution of EVM smart contracts.

Nodeos is the core service daemon that runs on every EOSIO node. It can be configured to process smart contracts, validate transactions, produce blocks containing valid transactions, and confirm blocks to record them on the blockchain.

As Trust EVM has an Ethereum C++ client implementation that is heavily focused on efficiency and nodeos can be extended using plugins, its team created a plugin for nodeos using silkworm, an implementation of Ethereum written in C++ from scratch.

This plugin will be responsible for serving JSON-RPC requests to the EVM. When the plugin is ready it will enable anyone to run their own Trust EVM node. They would only need to run the official EOS node with the new plugin enabled to be able to serve JSON-RPC requests or any other type of configuration that uses it.

Upon launch TrustEVM will enable developers to port and/or recreate any open-source project onto a more performant EVM. Leveraging the EOS blockchain, dApp developers on Trust EVM will be able to take advantage of low transaction fees, faster finality, greater scalability, etc.

Not much has been said about Trust EVM’s marketing but it will be the title sponsor for Token 2049, an annual crypto event where founders and executives of leading blockchain companies share their view on the market. Trust EVM will be one of the title sponsors for the event, alongside the EOS Network Foundation, meaning its brand will be displayed throughout the entire demo stage and surrounding area. The event will take place on September 28-29, 2022 in Singapore.

This date links with the scheduled launch of Trust EVM in September and also EOS’ consensus upgrade to Mandel. With both Trust EVM and the EOS Network Foundation attending Token 2049 as title sponsors this should help amplify their marketing and networking efforts at the event. In a networking environment filled with global entrepreneurs, investors, developers, industry enthusiasts, and global media, this should give Trust EVM and the EOS Network Foundation ample opportunity to communicate their message.

Aaron Cox, former Steem consensus witnesses and Co-Founder of the EOS BP Greymass, explained on a Twitter thread all th...

In this week EOS Go blog post, we explain how Dan's governance proposal does not reduce the payment of Block Producers....