Is Block.one Attempting A Takeover Of The EOS Network? 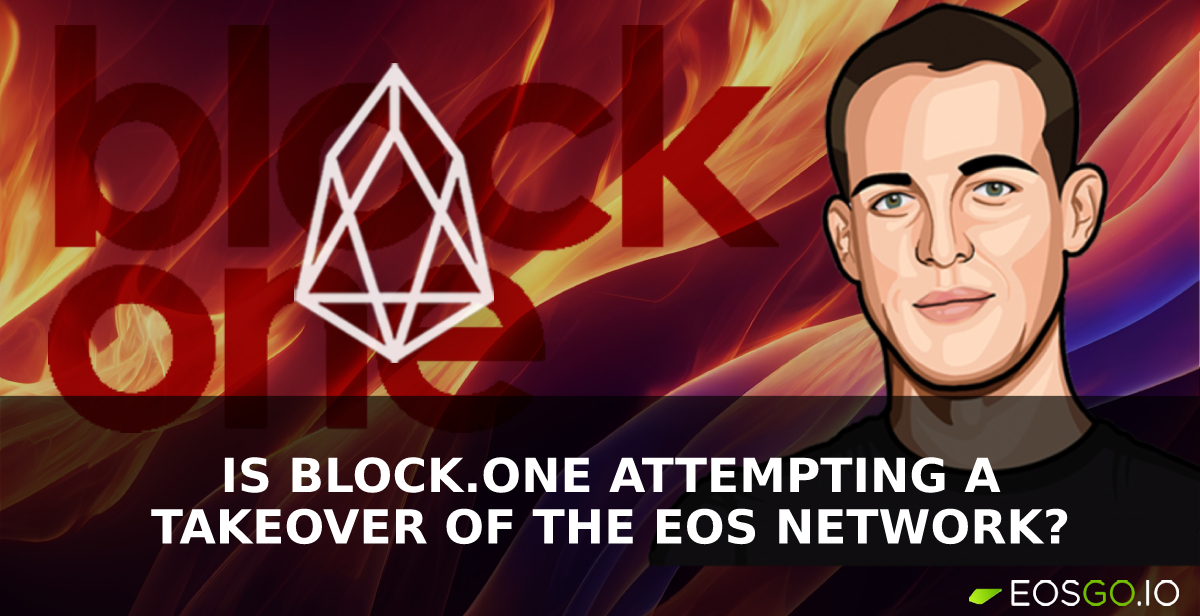 Block.one, the corporate giant that was kicked out of the EOS network by the current governing structure of Block Producers, has come out with a plan to gain an influence over the network’s governance. However, considering that the EOS Network Foundation (ENF) has been granted $100 million by the EOS network to form a new organization called the EOS Network Ventures (ENV), things could get interesting. Given that the ENV might use their funds to counter the actions of Block.one.

Following its divorce from the EOS network a year ago, Block.one and its former associates have begun a new campaign to rate, rank, and vote for EOS Block Producers. Considering Block.one’s dubious history with the EOS network, it begs the question whether its community trusts Block.one well enough to let it have an influence on its network’s governance.

It was only a year ago that the EOS community rallied to have Block.one removed from the network, after Block.one had announced the sale and transfer of 67 million EOS tokens to another entity. These tokens, worth $250 million at the time, belonged to the network but Block.one didn’t see it that way. Incidentally, Block.one had sold the tokens to one of its co-founders, Brock Pierce, and were to be transferred to Brock’s new venture called Helios, a VC/investment organization.

Skip to a year later and the two individual’s organizations have partnered to invest 500,000 EOS tokens into Eden, an organization founded by Block.one co-founder, Daniel Larimer. And this time around it seems like the aim for the three former associates is to gain influence and control over the governance of the EOS network, all under the guise of decentralization. If successful, this would mean Block.one, Helios, and Eden have the ability to decide which Block Producers get to be in the top 21. The top 21 Block Producers are tasked with voting on proposals that affect the operations of the EOS network, in addition to producing the blocks on the blockchain network.

The start of an EOS proxy war?

Unsurprisingly, just two weeks after receiving the 500,000 EOS donation, Eden announced the launch of the Eden Smart Proxy (ESPx). Eden Smart Proxy is a proxy that aims to allocate votes to multiple Block Producers that have a vision or ideology that aligns with its own, and does so on behalf of EOS token holders that contribute or stake their tokens to it. The proxy is described as “a win-win for EOS” and incentivizes EOS token holders through staking rewards (higher APR for early stakers). Block Producers are encouraged to participate with a promise that their cash flow will increase three to five fold. Eden Smart Proxy (ESPx) claims this will encourage Block Producer transparency, accountability and high operational standards. All of which certainly sound like a win-win for EOS.

This involvement in network governance could ultimately mean that Block.one and its associates will have the influence, as donors, to replace any Block Producers that they feel aren’t supportive of their interests and vision for the network. For instance, they could easily then influence Block Producers that empathize with them to undo the freezing of the 67 million EOS ($59 million) that Block.one tried to divest unto Helios last year. This of course would be done under the guise of doing what's best for the EOS network.

The freezing of Block.one’s tokens by the EOS network participants was praised by the industry and seen as a true display of the power that decentralized autonomous organizations (DAOs) can have over malicious big corporations. Now it seems what is arguably the community’s greatest achievement could be undermined by the very same corporation that they essentially kicked out of the EOS network. The threat is amplified by the fact that this corporation has deep enough pockets to incentivize greater support from network participants by offering high APR rewards for stakers.

When Block.one was essentially kicked out of EOS, the community had been fed up with the company’s misaligned interests to those of the network. For years, the EOS community had felt let down by Block.one’s failures to deliver on the promises made to them. Despite having raised $4 billion from the EOS ICO, the industry unicorn (billion-dollar company) couldn’t redistribute that back into growing and supporting the EOS ecosystem. The resulting frustration has led to Block.one facing multiple lawsuits from disgruntled investors. With the latest of which seeing Block.one’s $27.5 million settlement offer rejected by a United States district court just four months ago.

A desperate play at regaining power and control?

Since Block.one was kicked out of the EOS network things have gone from bad to worse for the multi-billion dollar company. It’s facing a lawsuit in which their multimillion dollar settlement offer was rejected, it is facing another possible lawsuit from the community-led EOS Network Foundation, and early this month saw its $9 billion SPAC deal for the Bullish exchange terminated. The latter point would’ve seen Bullish listed on the New York Stock Exchange (NYSE) and become one of only two big cryptocurrency exchanges to be regulated in the United States of America. The other being Coinbase.

Block.one has probably realized that in order to succeed it will need to have the EOS community’s support - helping to restore its shattered public image. Ironically, when Block.one decided to sell off and transfer the remainder of “its EOS tokens” a year ago, it was finally divesting its responsibilities to the EOS network. The company has been accused of treating the EOS community like a buddensome responsibility on its billion-dollar business dealings, which all disregarded the desperate needs of the EOS network’s well-being.

Now the tables have turned: EOS is doing better without Block.one, and Block.one is being buried by the rubble of the mess it created with its previous EOS dealings.

After four years of failing the EOS community, Block.one has realized, a year later, that it can’t survive without it. Nobody else outside the EOS network wants to associate with an unethical company that has a questionable public relations history on a global scale;- and definitely not the regulators. More especially now when everything is under a close watchful eye from regulators following the shameful collapse of multiple licensed centralized exchanges, and the ensuing tragedy of that.

With nowhere to turn to, Block.one has once again resorted to finding its way back into the EOS community through its previous associates. It is alarming to see all three Block.one founders teamed up and involved in a scheme to help “fix” EOS governance for the better. Whereas when it benefited them, 'EOS governance was decentralized and the best in the industry'. But now that they’ve been kicked to the curb it suddenly needs fixing?!

And now Block.one founders Brendan Blumer (Block.one CEO), Brock Pierce (Helios founder), and Daniel Larimer (Eden Founder), all have their incentives aligned with trying to improve EOS governance as if it were the biggest threat its network is facing. If anything, EOS governance has proved to be effective in carrying out the will of the people, and recent history is proof of that.

Unfortunately for Block.one their history is mired by the many instances of harm they’ve caused to millions of people around the world. Many of which want nothing to do with the company, and that, by extension, has affected the progress of the EOS network greatly. Thus the EOS Network Foundation is pursuing a lawsuit against Block.one on behalf of the EOS community.

Eden, Helios, and Block.one having influence over the governance of the EOS network could mean that the EOS community loses a dominant force that has always had the network's best interests at heart, rather than its own.

For years, Block.one had been against the implementation of a Worker Proposal System (WPS) which would’ve early on helped fund the development and growth of the EOS ecosystem. However, to Block.one’s wishes, despite a massive support from token holders and Block Producers, the Worker Proposal System for EOS never took off. Block.one was also against the establishment of a community-led EOS foundation to help represent the will of EOS stakeholders. It became obvious why that was the case when the ENF later led the initiative to get Block.one’s tokens frozen.

For a long time Block.one had gotten used to calling the shots in the EOS community and didn’t want to risk anything that could potentially weaken its influence over it. With the Eden Smart Proxy i.e. with its play on weakening the ENFs influence in the community, Block.one looks to recover the power it once had over EOS. Which creates for some interesting scenarios on how this power struggle could unfold.

The EOS Network foundation is an organization that is supported by the majority of the community, including the Block Producers. But Block.one and its associates have billions to dangle for support and the promise of innovative products they would deploy on the EOS blockchain. Which side will the EOS community choose? Is it possible at all that these two sides that are at odds with each other could come to a compromise?

Then there’s the possibility that the newly established EOS Network Ventures (ENV) could also use the $100 million to ward off any of the financial incentives Block.one might try to dangle on the network. Seeing as Block.one is a private (for-profit) company that has to report to shareholders about its expenditures and make profitable investments, that could complicate things. Whereas the ENV answers only to the EOS community and any investments it makes into the EOS network are basically to the benefit of all EOS stakeholders.

In the scenario where Block.one would be fully supporting the Eden proxy with a part of their EOS stake deposited into their Bullish Exchange, the ENV could use the $100 million fund to vote for Block Producers that align with its vision for EOS. Fighting off the potential threat that Block.one would be posing. This could level the field and bring back balance to the network.

The situation then would become a battle of who has the bigger warchest. For every Block Producer that the Block.one-Helios proxy (Eden Smart Proxy) votes for, the ENV could vote for a different set of Block Producers to try and negate its effects. In this scenario the race would be about who can get the most votes from the Block Producers and the EOS token holders.

Possibilities for how this could play out are abundant. But judging from how the community has responded to Block.one, Helios, and Eden’s intentions to change EOS governance, it is unlikely that Brendan Blumer, Brock Pierce, and Daniel Larimer will get the votes they need to make that happen.

This could be the opening phase of a high-level chess game to be played out on the EOS network. How it ends, and how quickly, will depend on who has the advantage and who’s holding all the strong pieces.

Another active week for EOS development is in the books. With the past weeks showing [bullish growth](https://www.eosgo...