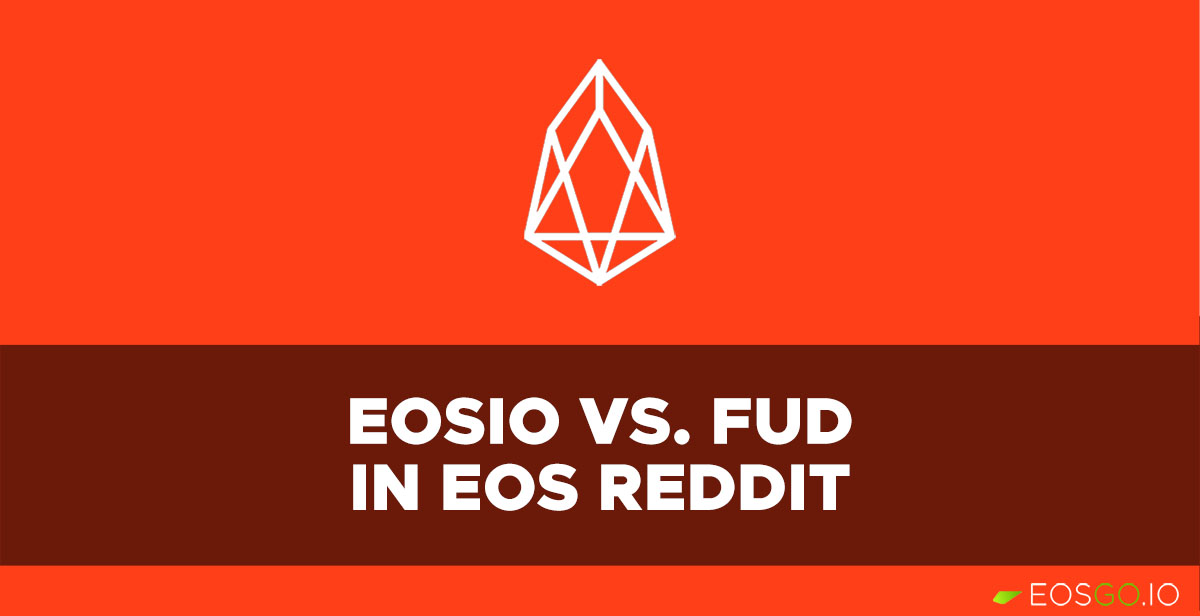 A user on Reddit (ETHfan234) published an excellent post summarizing the current situation of EOS and EOSIO and its main competitors, in particular Cardano and Ethereum. We recommend you to read the post that you can find below or on the link for reddit.

"Yes, the EOS price is down. Dan and Brendan are not scammers--Block.one is constantly upgrading the eosio software, like every several weeks there are new updates with their latest release this past week. The EOS mainnet just saw an increase to ~4,500 transactions per second this past week.

Block.one and EOSVC are still funding new investments that will leverage eosio. They just invested in a btc software company to use eosio. If these startups/companies want to use an eosio blockchain with the most liquidity, security, transparency, and decentralization, they will be wise to use the EOS mainnet.

Let's talk about competitors. Cardano is launching Shelley but still has 2 MORE phases to go before they can launch their actual mainnet. Cardano has no dApps, no real transactions (because everything is still on their testnet), and they have no real-world stress tests on their nonexistent mainnet.

Ethereum 2.0 is delayed and a head developer at the Ethereum Foundation stated that he believes Eth 2.0 will be launched in the Spring of 2021.

Avalanche, which purports to have solved Ethereum's defi scalability issues, just witnessed a massive DDOS attack on their public crowdsale last week and are now forced to push it back to next week.

Chainlink is valuable, but the DAPP Network can enhance its capabilities and effectiveness.

Tezos still has legal issues/$$ settlement, has no dApps of substance, are delusional when they say that they have solved governance through their liquid proof of stake (there are still large entities that control Tezos), and have a high annual inflation that hurts the value for token holders.

Why are developers not flocking to EOS in droves?

Marketing and Money. The eosio tech is superior. I develop on both Ethereum and EOS, and have seen first-hand which is the better tech. But blockchain technology in general needs to be far more scalable and faster to rival centralized database technologies like AWS and Azure.

Marketing of EOSIO needs to be better, but the EOSIO software needs to be ready for prime time. No blockchain is ready for primetime. Not Cardano, not Ethereum, not Tezos, not Chainlink, and any of the other top-20 blockchains out there. Block.one is smart not to waste money on marketing EOS to pump the price, unlike other crypto projects (all hype, no substance). Once EOSIO is ready, which I foresee in the next 18 months, they would be hard-pressed not to market the shit out of it.

Money. Developers like Ethereum because of the large pockets of VCs and other entities like Consensys or the Ethereum Foundation that can fund their projects. Ethereum developers have a way easier time in receiving funding with half-baked ideas. Block.one is not as generous in doling out funding and have many regulations and rules on who can apply. But, Block.one has poured in millions of dollars into dApps, which are now starting to come to fruition. Look at Everipedia's PredIQT, Sense Chat, Upland, Mythical Games' Blankos, WordProof, and Voice.

Side note, Consensys has been forced to cut their developer workforce twice in the past 18 months. They trimmed their staff by about 30%. OTOH, Block.one has been on a hiring spree and has a count of over 300 developers across 4 offices in Asia and the US."

We just published our latest article: Ideas that might fix EOS Governance. One of the most heated topics in the communi...