This Week: EOS Is Building Back Better 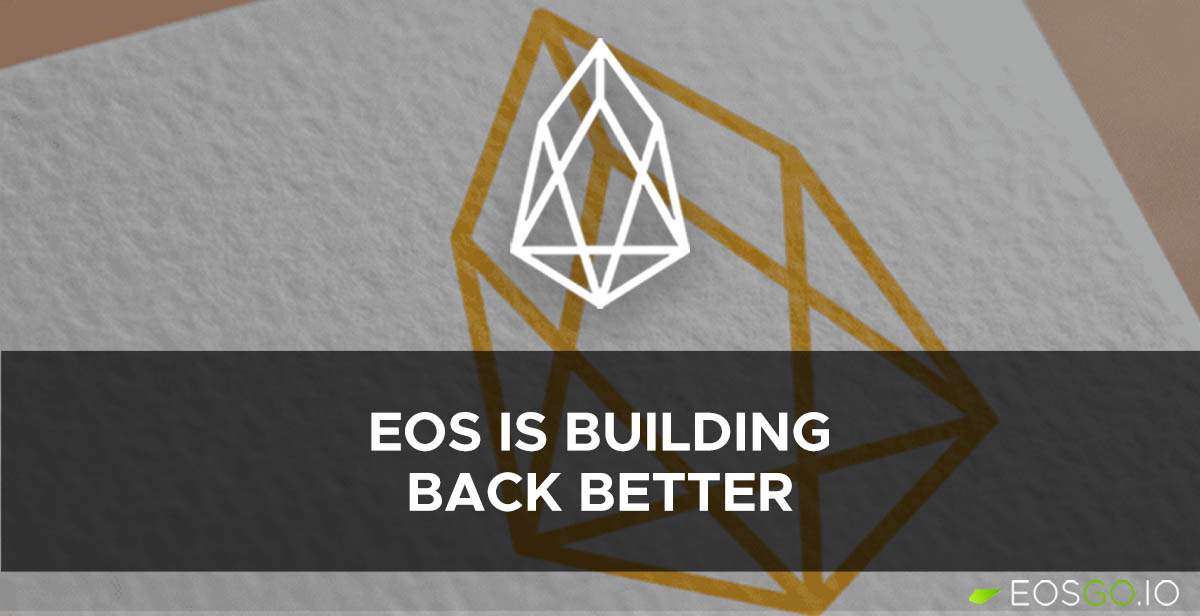 When it comes to building back better, nobody does it better than the EOS ecosystem. This week has been an eventful one, focusing on just that - building back better. The ongoing developments coupled with the return of others has created an environment of optimism on the network. The many initiatives within the EOS ecosystem are setting the network in prime position for the mass adoption of blockchain.

Elsewhere, EOS’ bullish developments over the past months have caught the interest of some of the big publishers in the industry.

CryptoDaily recently published an article comparing EOS’ past negative narratives which are steadily subsiding to today’s more positive ones. The article does a great job at recognizing EOS’ current progress and the positive changes that have come since Block.one was removed from the network, especially the efforts of the EOS Network Foundation in recent months.

The Crypto Coin Show channel on YouTube did an interview with Yves La Rose (Founder of the EOS Network Foundation), discussing everything from how the ENF is assisting growth in the EOS Network, the ongoing grants, funding, and help they are providing startups moving onto EOS. Also the explosion of GameFi on EOS, the incoming EVM compatibility and Inter-blockchain Communication (IBC) Layer for full blockchain interoperability, and more.

Special mention also goes to Yves’ article on the Nasdaq website where he discussed Decentralized Autonomous Gaming Guilds, or DAGGs - a term he’s coined - and the vital role they play in building GameFi.

Architects of Consensus, a series dedicated to shining a light on the unseen figures who are developing and advancing  EOSIO, is making a return. Its return was marked by an interview with Buck Kittinger (ENF Principal Engineer) who discussed his experience with blockchain, and the problems and opportunities the technology, especially EOSIO, has to expand on current limits.

“Architects of Consensus will return with more interviews that reveal the unseen figures who make the magic of blockchain technology possible on #EOS and beyond!”

The first one being the Contract Developer Toolkit. The latest release candidate for version 3.0.0 includes feature changes to Stack Canary, Crypto Extensions, and fixes to a few Bugs.

The second release candidate was for Contract version 3.1.0 which made changes to the core contract. Some of the new features include the introduction of a Boot Contract for bootstrapping a new blockchain, especially for testing purposes. Other changes include Configure WASM Limits, Building, Compatibility, and Upgrading.

Changes made to the second iteration of Mandel’s release candidate include a New Build Procedure, Protocol Compatibility, and other protocol changes.

● It Might Be The Laughing Stock, But Eos Is Making Real Progress

● Decentralized Autonomous Gaming Guilds Are Essential To Build Up GameFi

● Architects of Consensus — Determinism At The Root Level With Bucky Kittinger

Block.One recently merged some new REX updates into the eosio repository on Github. These updates are consistent with t...