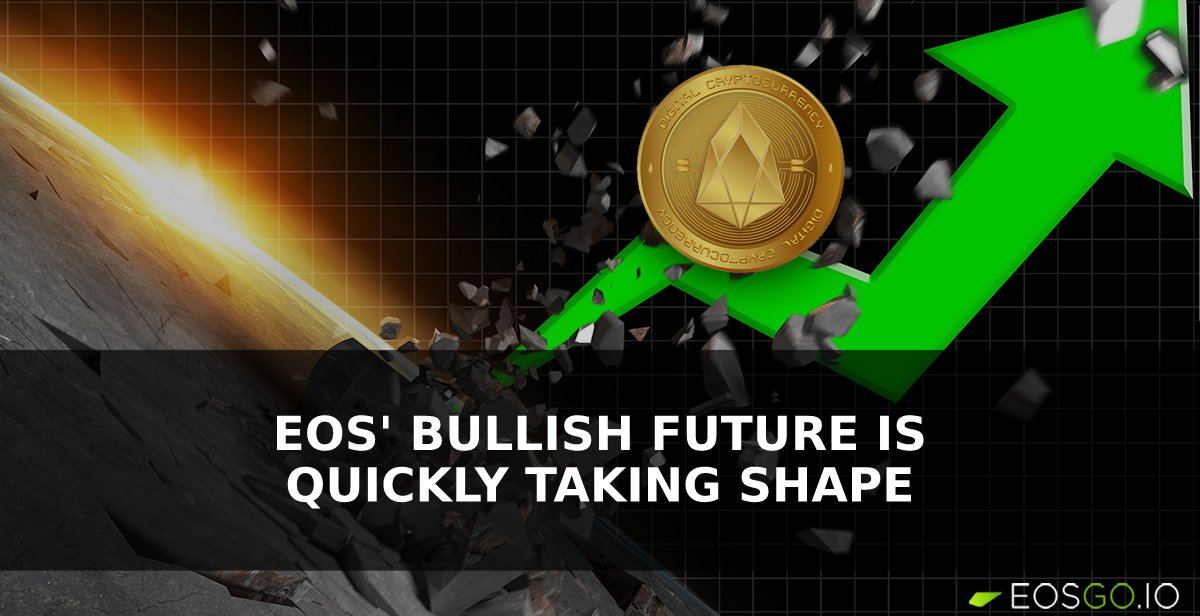 Since the start of the new year EOS has hit the ground running with its ecosystem developments. With 2023 being the year that all ongoing initiatives are set to launch, the race is on to deliver them on time. This past week the community got progress updates on some of these ongoing initiatives.

The varied approach to tackling ecosystem growth will make for an epic year for the EOS network. Creating a great opportunity for the entire ecosystem to be marketed as a complete ecosystem that’s capable of facilitating every need of the Web3 user.

“This week the ENF marketing team hosted an offsite to lay the groundwork for #TheNewEOS growth strategy in 2023.” - EOS Network Foundation 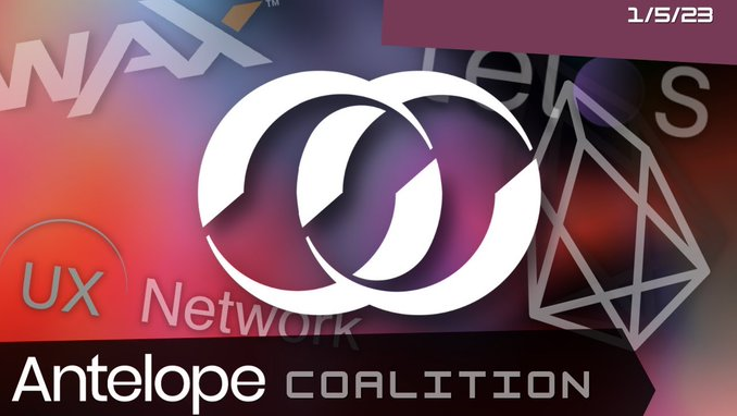 P2P Peer Discovery - There were two bids that came in for the project, and there’s been discussion about OCI’s pricing (cost component) and also about the required experience from Fudan as they are new to the kind of work that’s required. Also mentioned was the necessary discussion on the next steps to be taken with each of the bidders.

RAM Limitation Fixes - As the ENF was the only bidding company for this project whose bid is due on January 17, the members were still expecting to hear from the ENF before the due date.

Antler CDT - Work for the Antler CDT (Contract Development Kit) is in progress, but the Coalition needs more detailed weekly reports or status updates about exactly where the team that’s tasked with the project is with what’s being worked on. The project has a target release of March/April 2022.

Ledger app support - The ENF is still engaging with the Ledger (hardware wallet) team, which has been slow in responding, about the additional support for Antelope chains and their cryptocurrencies.

Antelope IBC - Following the recent security audit which came back all-clear, the next step seems to be to have the contract deployed on all of the respective Antelope Coalition chains. Also the respective chains will have to sign the MSIGs (multi-signatures) to create the accounts on their chains that will enable Anteloper IBC (inter-blockchain communication).

Instant Finality - A team is currently working on deploying a solution that will provide the fastest finality possible with the most flexibility in configuration parameters. They’ve also decided on the addition of crypto primitives that will allow for a broader range of use cases beyond faster finality by leveraging pairing-based cryptography, which can be used for all sorts of zero knowledge systems including zk-SNARKs and zk-STARKs.

Wallet SDK - The first usable code in a technical preview is now available on GitHub for the upcoming release of the Session Kit. The goal with the Session Kit is to create a developer experience that feels similar to what developers would expect from other web technologies. With the term “session” being a technical concept in development that represents the connection between an authenticated device and a remote application server. 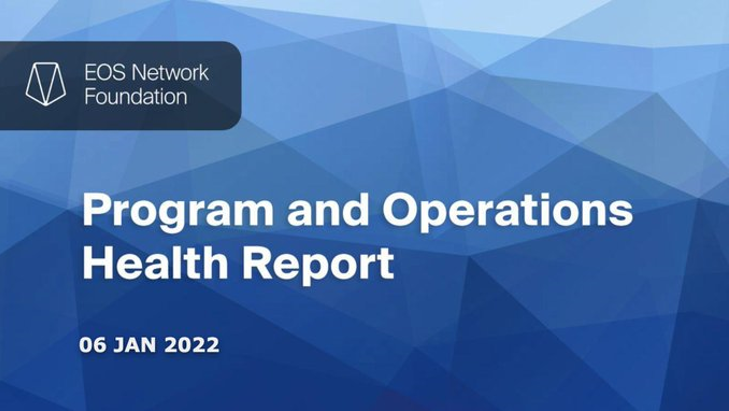 The Program and Operations Health Report for the month of December was recently released to give insight into the work the EOS Network Foundation (ENF) is doing behind the scenes. All in an effort to foster an ecosystem built on open communication and transparency.

Multiple ENF projects are tracked by this report including projects by the Antelope Coalition between EOS, WAX, Telos, and UX network blockchains, as well as the current RFPs (request for proposals) of both entities.

The RFP for P2P Peer Discovery is currently awaiting review before the project is awarded to the most qualified vendor or contractor. As the only bidding contractor, the ENF has won the RFP project for Limitation Fixes. The RFP for Provable State Domains is pending project requirements before it can be issued for contractors to bid on.

This latest report shows that the Market+ Dashboard, Recover+ Portal, Yield+ Portal projects are complete. While other projects such as Hypher DAO, Scalability+ IBC, and Trust EVM are still works in progress.

The Yield+ program, which is designed to incentivize DeFi dApps on the EOS blockchain by increasing Total Value Locked (TVL) and generating yield, has entered its fourth month of operation. The December 2022 report shows that despite recent volatile market conditions that saw a decline in economic activity, the program has seen rather positive trends, with 14 dApps participating and 11 of them qualifying for rewards.

A key metric being tracked by the program is TVL, which currently allows for both EOS and USDT cryptocurrencies to be counted as TVL for reward eligibility. As of writing the TVL on Yield+ sits at over $28 million, which is more than double the $10 million it had upon launch on August 28, 2022.

The program also tracks other metrics such as the three core stages of the transition of a Layer 1 chain's value proposition from speculation to ecosystem-driven. The data shows that EOS remains in the "Green Field" stage, where Market Cap exists without significant TVL, especially when compared to other large cap chains.

Overall, the data confirms that the program is seeing a steady uptake and growth in TVL against Market Cap. TVL in the EOS ecosystem is also showing strong idiosyncratic growth compared to other large cap chains, which have witnessed a decline over recent months. Yield+ is expected to continue its positive trend in the upcoming months. 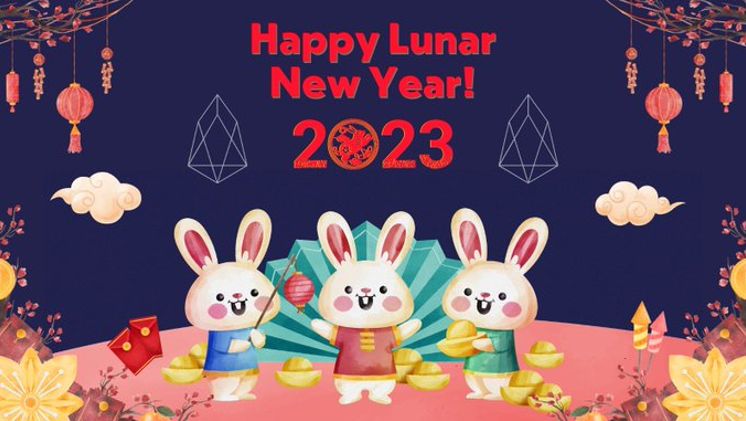 In line with the coming Chinese/Lunar New Year on January 22, the ENF has launched another NFT giveaway following its recent Holiday Gift Giveaway contest. Having kicked off on January 13, EOS account holders can receive guaranteed NFT prizes simply by answering a quick survey.

For two weeks leading up to the Lunar New Year there will be two quick surveys, which provide EOS account holders two opportunities to earn the exclusive Lunar New Year-themed NFT prizes. Everyone that answers these quick surveys will receive a mystery gift box that contains varying prizes.

In addition to the exclusive Lunar New Year-themed NFT prizes, other prizes include 1500 EOS worth of airdrops, as well as Pomelo Cheques. The latter of which can be used to help fund the winners’ favorite EOS public goods projects and services on Pomelo Grants.

Find out more about how to participate - EOS Lunar New Year Giveaway!

In the last 24 hours Coindesk, one of the major crypto media outlets, just published an article written by Brady Dale t...