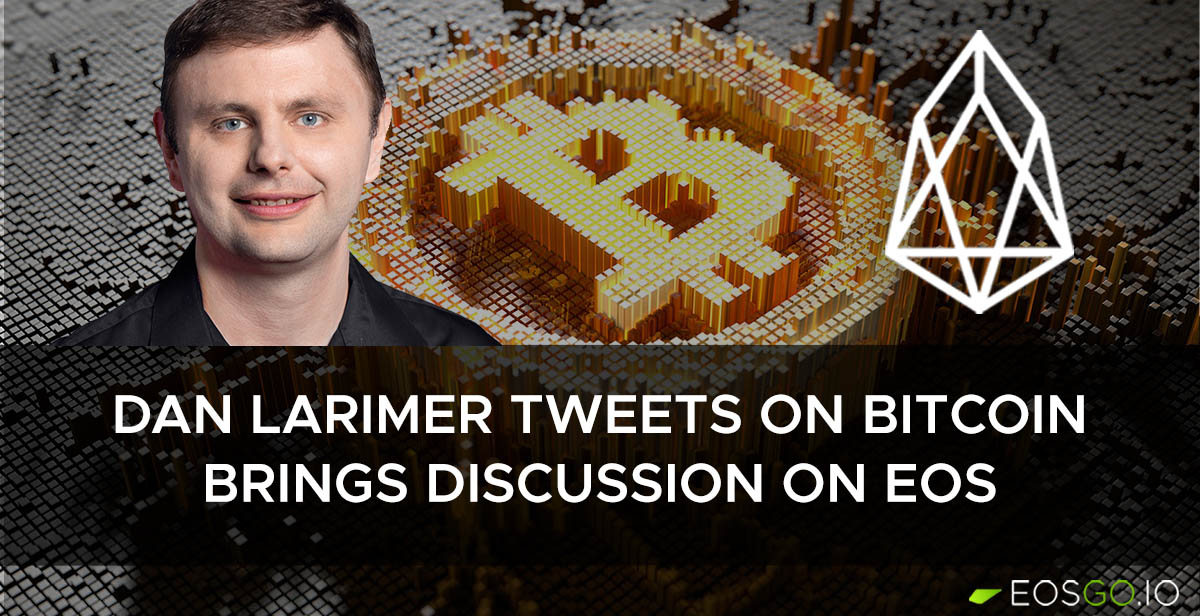 With BTC hitting new highs, Block.one CTO and EOS founder Daniel Larimer started tweeting about Bitcoin. However, these tweets sparked a community discussion, and many feel that Dan should be more focused on EOS. He replied that he is dedicated on the technology. What else did people discussed? Let's take a look!

How would bitcoin be better or worse if mining could be replaced with proof of burning bitcoin. The difficulty adjustment would be a change in the minimum price to produce. No block rewards. Best chain being the one with most burnt?

After the development was sent out, a community member, Dizzle, said.

Is it possible that you can even try and make the eos token more valuable, is that even on the docket ?

BM replied with the following.

I build tech, but clearly value is not derived from technology alone but from the community that chooses to use the tech.

It would increase centralization long-term because it would be harder to create new competitive advantage strategies.

Fascinating. I would have predicted it would increase decentralization by eliminating economy of scale and technological barriers to entry while preventing censorship.

Interesting, but I'm afraid it creates a significant deflationary effect. It is a fundamentally unequal structure creating strong instabilities. Perhaps the best choice is supply elastic that tolerates its inflation and deflation?

Bitcoin is strongly deflationary. It is why everyone buys it.

I bet would spawn burning pools, and each transaction would attach a burnable fee declared by the pool, in line with market rates. A race to the top, with a potential attack vector of entities pumping the burn rate, which might be hard to normalise once increased. 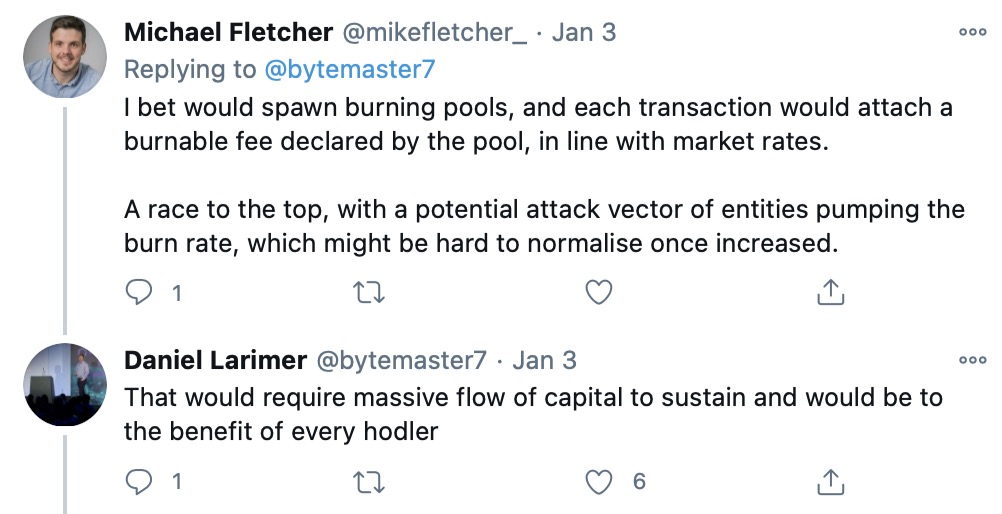 It would turn miners into high-frequency traders.

Pros: Adds a lot of liquidity to the system. Bullish.

A block producer would still have to wait for transactions to earn income from production. So it is a race to collect fee paying transactions not to produce a block.

I think the competitive advantage would be more significant on the sourcing of cheap BTC to burn, given mining rewards.

Interesting theory. Not sure it makes sense given fungible tokens. 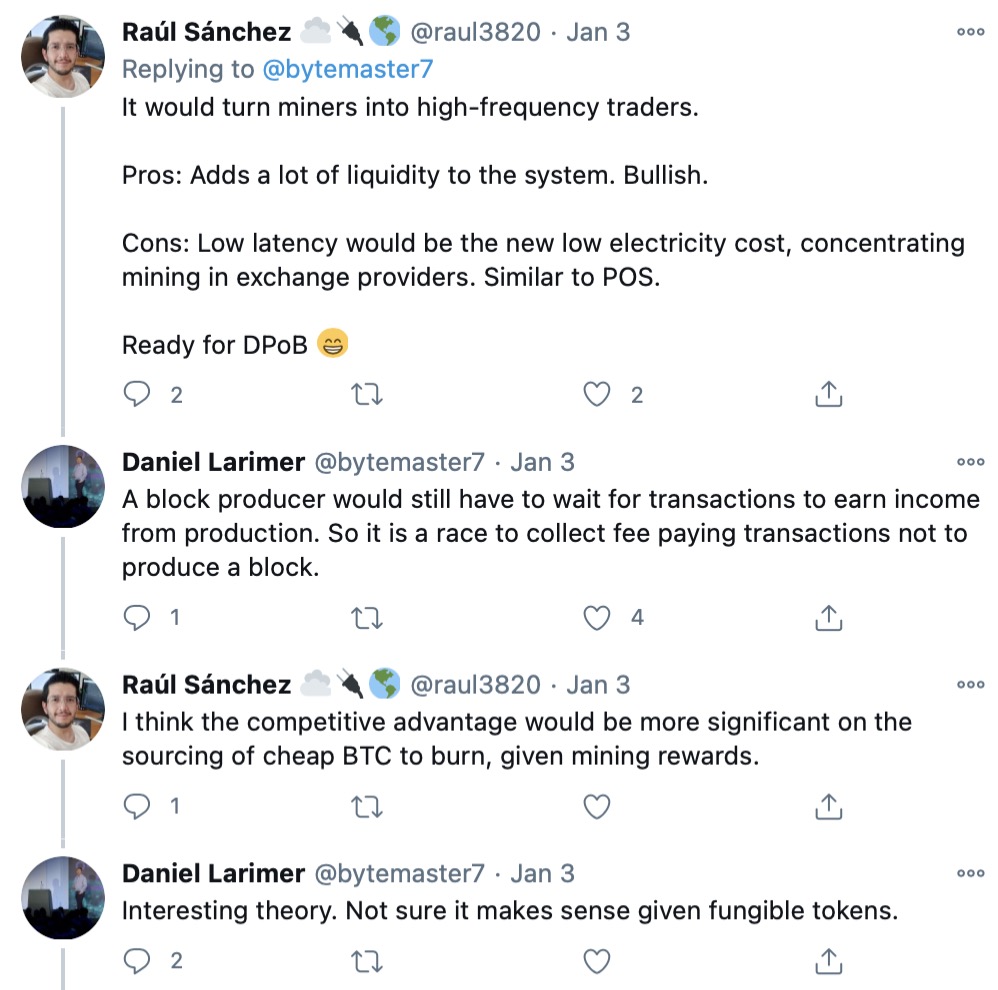 How do miners get paid?

By people who want to transact.

Bitcoin is best the way it is. You should think about fixing up EOS. The biggest scam coin in history.

What would you do ?

So you confirm that EOS needs to be fixed?

No. I’m asking for clarification on what is technically broken? 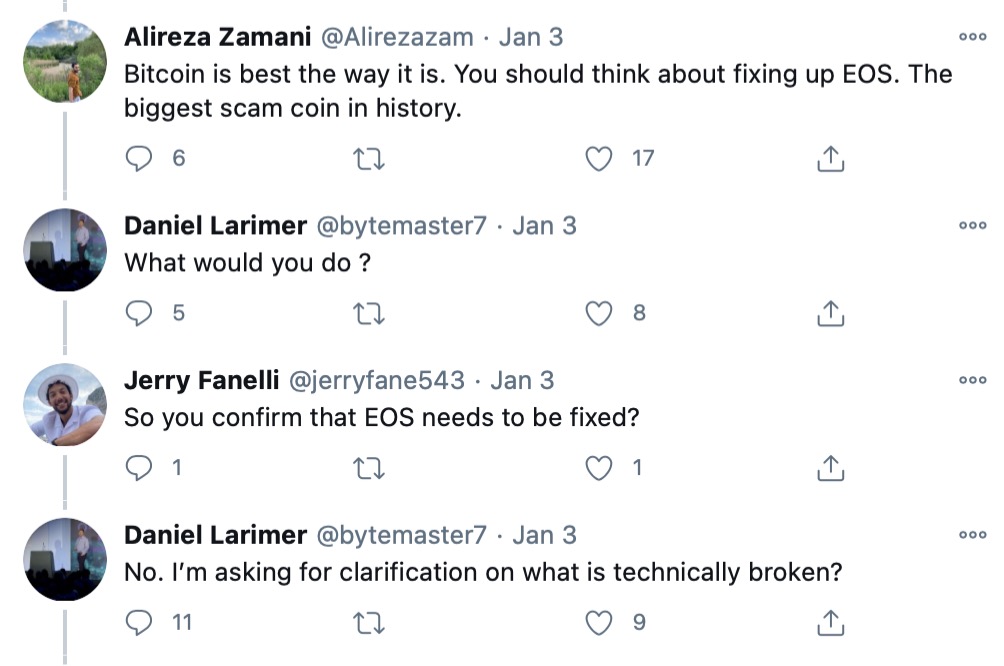 If it were to cause a decrease in hash rate it would upend one of the biggest promises of BTC mining: CONSUMPTION OF EXCESS CAPACITY. Bitcoin, as is, provides a mechanism to make renewable production economic at scale. Drop the energy demand and excess capacity is wasted.

Who gets to build the next block? The highest bidder? Weighted random from bidders?

Dan , I still do not see 4 billions dollars

Not in my control. I just build tech.

From the above Twitter discussion, we find that Daniel Larimer is still only concerned with the technical aspects of the blockchain. He said he has no control over the use of the EOS ICO funds, and his main responsibility is still to provide technical support for the EOS mainnet. What do you think about this?