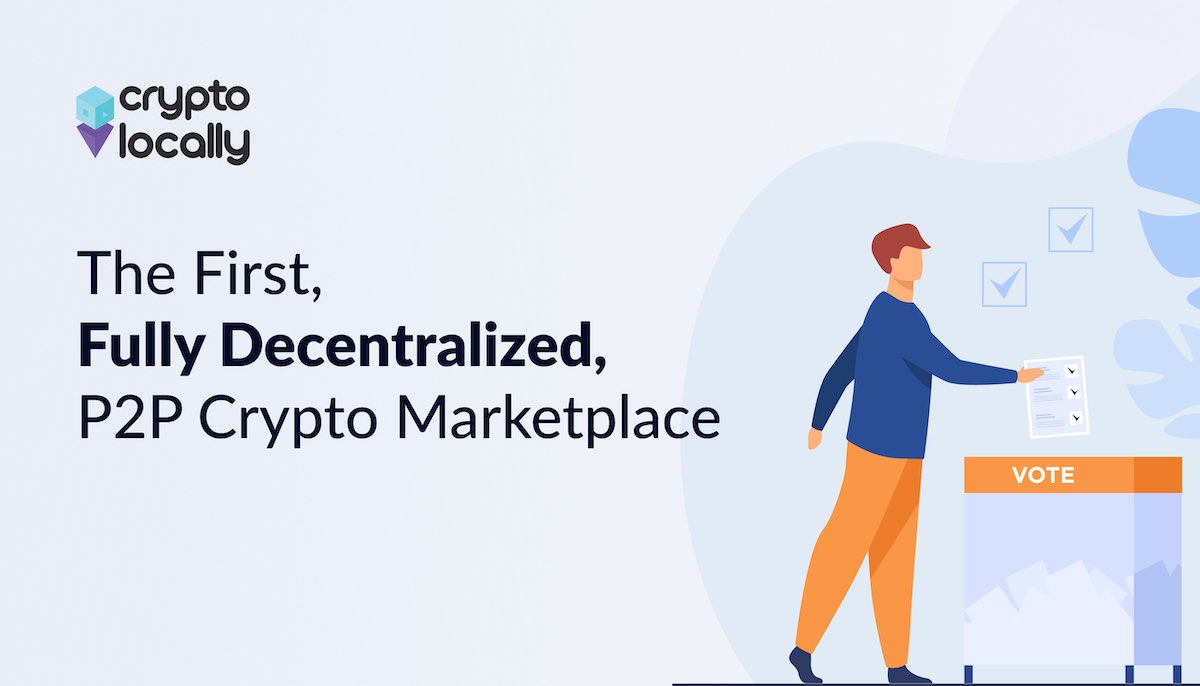 CryptoLocally has recently announced the launch of GIVernance, making them the first fully decentralized peer-to-peer exchange in the world. This is another first from CryptoLocally which earlier became the first P2P crypto marketplace with a DeFi feature with its Finance Wallet. GIVernance invites GIV token holders to lead CryptoLocally’s direction by integrating a governance model at its heart.

The decentralization of CryptoLocally's governance is an important step towards the realization of a truly decentralized organization. With GIVernance, the platform will be driven by the creativity and diversity of their community members. This construct gives a sense of authority, ownership, and responsibility to the members. Shared governance is a powerful structure that unifies all stakeholders, which, in turn, engages participants, creates powerful network effects, and improves overall performance.

GIVernance is the next evolution of GIV tokens, CryptoLocally’s native tokens. It gives GIV holders the power to participate in creating and voting proposals that determine the direction of the development of CryptoLocally’s ecosystem. Those who choose to participate are only required to stake their GIV tokens. In fairness, greater weight is given to voters with higher voting rights. Initially, token holders will have the right to approve token listings, modify the utility of the token, and suggest governance model improvements.

According to their announcement, GIVernance will also give token holders control over the level of inflation of the GIV token, revise staking rewards, and decide on the free floats of the platform by way of token burns. GIVernance participants will also be able to choose CryptoLocally Vault (CLV) strategies with the main aim of bringing more value into the entire CryptoLocally ecosystem.

“GIVernance is a huge milestone for us at CryptoLocally, by allowing the community to manage and govern the whole platform through GIVernance, we’re finally offering a unique decentralized solution to the users! Voting rights will now offer GIV holders the ability to choose which token will be added to CryptoLocally, the level of inflation and even the choice to vote for proposals submitted by other community members!” - Hugo Campanella, CryptoLocally co-founder.

GIV holders who want to support a proposal will need to stake - in other words, vote - their GIV token to the respective proposal. At least 10% of the circulating supply of GIV tokens must be staked on a proposal to make the proposal valid. These criteria are fixed for all proposals for the time being. The community will determine revisions for these criteria going forward by voting..

GIV is the native utility token of the CryptoLocally P2P exchange. It was first integrated as a discount and incentive token where buyers and sellers are both awarded GIV tokens each time they trade. Users earn GIV token staking rewards when they're holding GIV tokens on CryptoLocally’s Finance Wallet. In addition, providing liquidity to Balancer and Uniswap enables them to earn more tokens. Alternatively, GIV tokens are available for sale within CryptoLocally’s platform or in secondary markets like Binance DEX and Bithumb.

GIVernance extends the utility of GIV tokens enabling decentralized governance to CryptoLocally. This newest innovation from CryptoLocally has never been seen before in any other P2P exchange before. CryptoLocally believes that empowering its users to take a more active role in its platform’s governance, will bring more value into its ecosystem while at the same time reinventing itself to become the first truly decentralized, peer-to-peer trading platform.

About the GIV Token

EOS Aloha recently issued a multisig proposals to remove six BPs that at this date didn't provide any information regar...