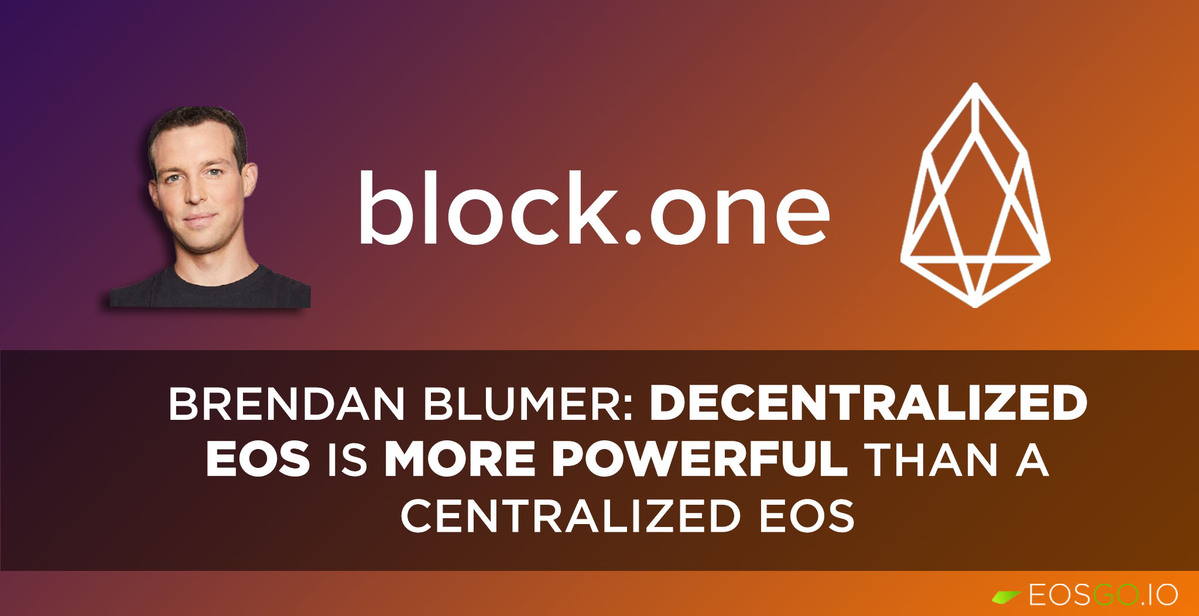 Brendan Blumer wanted to clarify on Twitter for good how Block.One approaches $EOS. From his statement he pointed out how Block.One believes that the main strength of EOS is its decetrallized community, and that a more centralized version of EOS would be counterproductive. They are also planning to be more active in the $EOS community through the PBE, and will begin voting by the end of this month.

"As CEO of B1, I get to see many sides of the #EOS community across the world which is extremely rewarding and insightful, but it also comes with daily exposure to those that have a different vision for how we should spend our time and resources.

#EOS is the first major public network to be launched with #EOSIO software and it has quickly become one of the largest dapp ecosystems globally, so we take our involvement seriously because the stakes are high. While we continue to advance #EOSIO through R&D, developer feedback, and our own application, we believe it is what B1 doesn’t do for #EOS that makes it so revolutionary. This informs our measured approach to prioritise its distributed autonomy.

I am aware that there are other companies/foundations which take a more centralised approach in how they have exposure to tokens, operate the network, and control its future, but #EOS was designed without that possibility, and we don’t believe that it would maximise its potential The #EOS community is extraordinarily diverse and I am thankful that so many of you engage so heavily with me. I wish there was a way to make all of you happy all the time, but between token holders, dapp authors, network operators, and even regulators there is an enormous set of considerations that must go into everything we do, and trade offs that we must chose between.

That said, through our PBE team, we are actively working on our first steps in voting, and the subsequent plans related to our engagement #EOS is an unprecedented open source collaboration, and it’s autonomous success is of paramount importance to B1, and me personally. The road ahead is very exciting, and we will get there together"

"WOW! JUST WOW. I could write a book on this comment. I have been intensely involved and invested in EOS since 2017. This sucks, and I'm out."

"It’s important to not misinterpret this statement. #EOS is operated and governed by token holders and understanding the distinction between the EOS network and block one is important. B1 is focused on improving our open source software, and positively adding to the network through our minority vote, but EOS’s future rests on the shoulders of a global community, and that decentralization is more valuable than us attempting to play a dictatorial role."

"The time you change Voice eos to Voice eosio.... this cause fuds and chaos everywhere. At least we need to know why?"

"Voice is in beta right now. We are focused on iterating as fast as possible on the tokenomics and meeting compliance regulations to prepare for live launch. Voice’s future architecture will depend greatly on what’s required to allow token transferability in various jurisdictions"

"The leadership of competing protocols are actively building the brand or openly discussing the future of the protocol with a developer community. You know the delta between them and B1. You are building the best tech and nobody knows exept struggling BPs."

"Dan Larimer and team are actively designing the next generations of our software, and unlike many of these other protocols which are spending time on fancy roadmaps without timelines, we are focused on delivering the future, and keeping it close to the vest until it’s ready."

"Are you planning an online June1 event this year?"

"No, we will do our events in line with our product readiness, as opposed to a fixed time each year. That said we have already begun plans on our next!"

The Voice team has announced the new Human Sign-up process that will be used for new sign-ups on their platform, replac...

The pEOS team recently enabled staking of pEOS tokens. Users can now stake their pEOS tokens for better security and to...