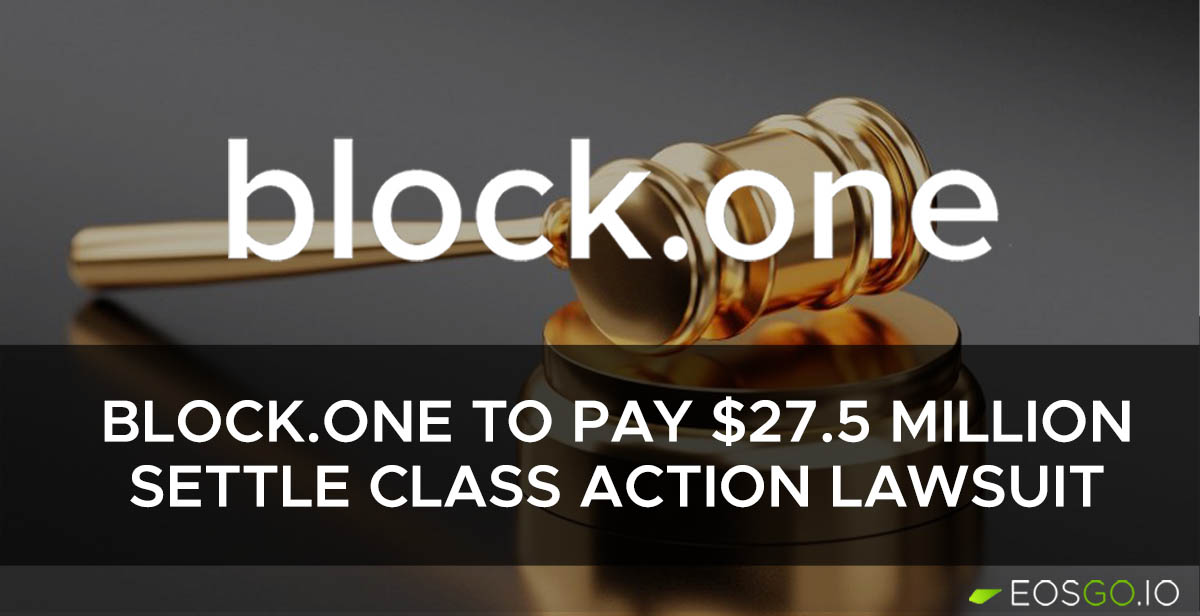 Recently, Block.one reached a settlement with the Crypto Assets Opportunity Fund, which previously filed a class action lawsuit against Block.one. With the court's approval, Block.one is required to pay $27.5 million in settlement fees to end the lawsuit.

The news sparked a lively discussion in the community upon its launch. EOS Go has compiled the process and details of this lawsuit.

As we know, the EOS fundraising started in June 2017 and lasted until June 1, 2018, with a fundraising amount of $4.1 billion, which helped EOS become the star project that rocked the whole crypto industry at that time.

However, ecological development takes time, and since its official launch in 2018, EOS as well as Block.one have not performed as expected, and many EOS stakeholders have become increasingly dissatisfied.

In May 2020, investors in the EOS initial token offering have filed a class action lawsuit against Block.one in the Southern District Court of New York, alleging that Block.one provided misleading statements to investors.

According to the complaint, the plaintiffs who initiated the lawsuit include investors represented by Crypto Assets Opportunity Fund LLC and Johnny Hong, while the defendants include Block.One CEO Brendan Blumer, Chief Technology Officer Daniel Larimer, cryptographer and former partner Ian Grigg, and former advisor Brock Pierce.

The lawsuit alleges that.

Block.one provided false and misleading information to investors about EOS with the intent to raise billions of dollars through unregistered sales of securities.

According to the suit, Crypto Assets Opportunity Fund LLC and Hong purchased tokens during the token sale. Also, the plaintiffs said: In an effort to drive demand for EOS and increase revenue, the defendants artificially inflated the price of EOS by making false and misleading claims about EOS, but harmed unwitting investors, in further violation of securities laws.

As approved by the Court, Block.one was required to pay $27.5 million in settlement costs.

In response to the settlement, Block.one issued a statement on its official website stating.

“Block.one believes this lawsuit was without merit and filled with numerous inaccuracies. However, accepting this settlement allows us to focus more time and energy on running our business and delivering new products.”

This is not the first time Block.one has faced these types of issues.

In November 2019, Block.one was the subject of a class action lawsuit filed by investors over alleged ICO violations, causing widespread concern among EOS investors.

According to documents released by the SEC, Block.one's ICOs conducted during 2017 and 2018 were not registered under the U.S. federal securities laws and were allegedly in violation. In addition, the company failed to provide investors with the necessary disclosures needed to make a reasonable decision. Block.one subsequently communicated with the SEC and agreed to settle by paying a civil penalty of $24 million.

Many believe that Block.one's decision to settle was a smart move.

Where does EOS go as public chain competition intensifies?

From this response on Block.one's official website, we seem to see a signal that Block.one intends to be more proactive in the development of the EOS network.

Entering 2021, the blockchain industry has seen a blossoming of major public chain projects and increased competition in the public chain circuit. In the current new race of public chains thriving, where will EOS go in the future?

As a star project representing the blockchain 3.0 era, from Profi at the beginning of the year, to Bullish exchange, to EdenOS governance exploration, we have seen frequent dynamics of EOS ecology this year, which also makes us have more confidence in the dormant EOS. Regarding the future, we reserve our expectations and wait and see.

The recently formed Yield+ Working Group has published the most anticipated Blue Paper on EOS thus far. In it, the Yiel...