WAX.io: A Series of Firsts 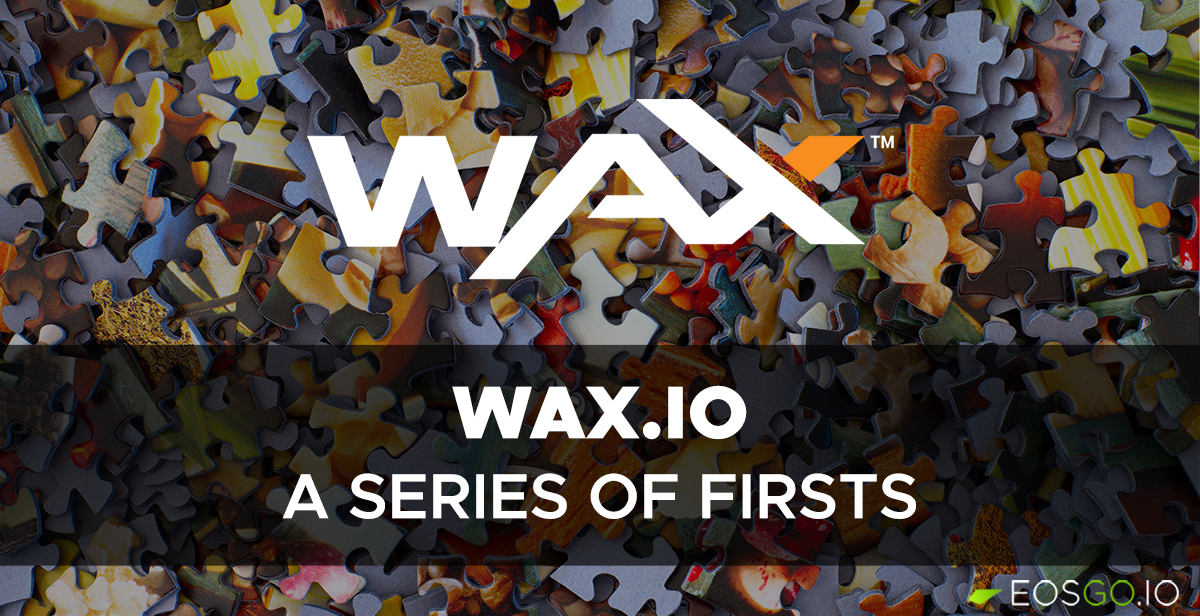 As has been noted multiple times across many mediums including right here on our very own EOS Go blog, WAX.io is carving a path forward and pushing boundaries into regions of the blockchain and cryptocurrency spaces where none have really gone before. In this piece then we will explore some of the avenues in which both WAX as a blockchain and certain select projects have bridged the gap left by other blockchains towards rewriting the histories and changing the paradigm of what it truly means to be a trendsetter in blockchain.

Of course from the very get go as the name even insinuates, WAX was designed and launched from the perspective of tailoring towards collectibles and assets in a manner that other chains are not. The Worldwide Asset Exchange seemed to not only recognize but come up with an easily adoptable solution to a problem that has long plagued the world of collectibles far previous to even the advent of blockchain. By seeing the advantages of what blockchain technology could bring to the collectibles space in terms of provable scarcity and unalterable verifiability, WAX set out early on a mission to utilize blockchain and in particular EOSIO software to custom tailor a blockchain towards a whole new generation of collectors and media fans across multiple realms of digital goods ranging from cards, gaming items, and the potential for infinite variations of these and many more.

Although not the first to conceive the concept of collectibles on the blockchain or NFT’s, WAX.io does seem like it is the pioneer in the sense that it was the first dedicated blockchain to take up this mission of progression with full on laser sharp focus. Beyond the impeccable structuring of the the WAX Cloud Wallet and a variety of marketplaces that sprung up in order to propel a variety of would be collectibles towards actually being listed, bought, and sold as already relayed in A WAX NFT Beginners Guide, the first order of business then was securing a major partnership with none other than high profile collectible brand Topps. Known for foray and domination in the early physical based trading cards and memorabilia, the announcement of this partnership propelled the community into a frenzy and catapulted the WAX.io blockchain into the spotlight as a major contender not only for blockchain collectibles, but for collectibles in general. With the ability to add such goods as Disney, Star Wars, and the Avengers to the blockchain, and in conjunction with the success of the first three releases of the Garbage Pail Kids series 1, 2, and Tiger King NFT cards, there is little doubt that this will go down in the history books as one of the most iconic partnerships in the history of both EOSIO and blockchain.

Although the Garbage Pail Kids and Topps brand recognition is great for the WAX ecosystem, that is not to say that is all that is going on in terms of firsts for collectibles and NFT’s. Just having a quick browse through some recent releases and it is easy to see why the community has been so excited about what other projects are coming to the WAX.io ecosystem. Just taking a brief moment to mention a few,

Blockchain Heroes came out strong and is still going with their own special take on the superhero concept. By composing a variety of collectible types and rarities, organizing events around the release and community pack openings, and dropping special editions via partnership events with other established and up and coming projects all within the spectrum of keeping to the semi truths of certain celebrities of blockchain, it is easy to see why founders Joel Comm and Travis Wright were invited on-board the WAX Advisory Council. All previous and present success aside, it looks like things are just beginning with rumors of a series 2 focusing around potential villains of blockchain heroes among other implementations and adaptations on the potential horizon. For a more in depth look at the launch and the project in general, be sure to check out Blockchain Heroes: The Good, the Bad, and the Ugly if you have yet to do so. 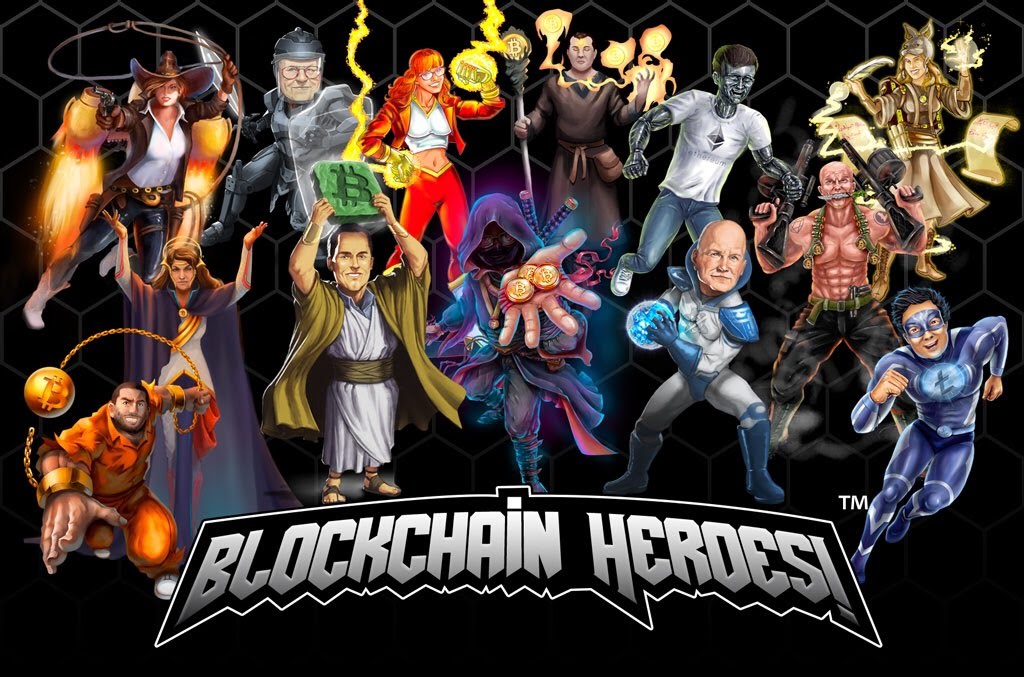 Uplift.Art, the charitable extension of Upliftnation.io, recently launched their own take on collectible NFT’s with their premiere into the WAX.io space of blockchain based digital music videos. Although the original concept has been pioneered with the EOSIO indie advocate and personality Michael Blu of mblu Crypto, the team has grand visions and expectations that more proliferate artistic and musically inclined personalities and celebrities will help to enhance both the space and the vision that Uplift.Art foresees as a new viable production model for both professionals and amatures alike.

In addition alongside the team at Atomic Assets, Uplift.Art has contributed to the overall ecosystem via the release of a new tool which allows for the select targeting of WAX accounts holding various assets for special promotions and airdrops. Via this tool it is now possible for anyone to partake in focused airdrops whereby those with pre-determined parameters within their WAX accounts can be gifted either inclusively or randomly future NFT’s and collectibles either to show appreciation for support or for promotional reasons. Although projects may define and use this tool at will, Uplift.Art has already defined that the parameters behind their future drops on the WAX.io side will be targeted to those with the genesis assets of The Serpent and the Wolf and My Bitcoin Bull Vb NFT’s, both of which can be acquired via the secondary marketplaces like atomichub.io.

KOGs on WAX inspired by the 1990’s pop culture phenomenon POG’S is another interesting first to make its way into the WAX.io collectible and NFT space. KOGs standing for ‘Keys to Other Games’ are round disk-like NFT’s resembling a poker chip printed on both sides whose sole intent is not simply collection but eventually to be used across a number of different games. Just as in the original physical POGs game, in order to play KOGs a heavier game piece known as a slammer will also be necessary to whack stacks of KOGs of WAX. At present the associated game is only in the testing phase, if the hype behind this project and the tendency for anything built on WAX to be embraced entirely by the community is any indication, KOGs on WAX just as the many that came before are staking up to be a community favorite and great success. 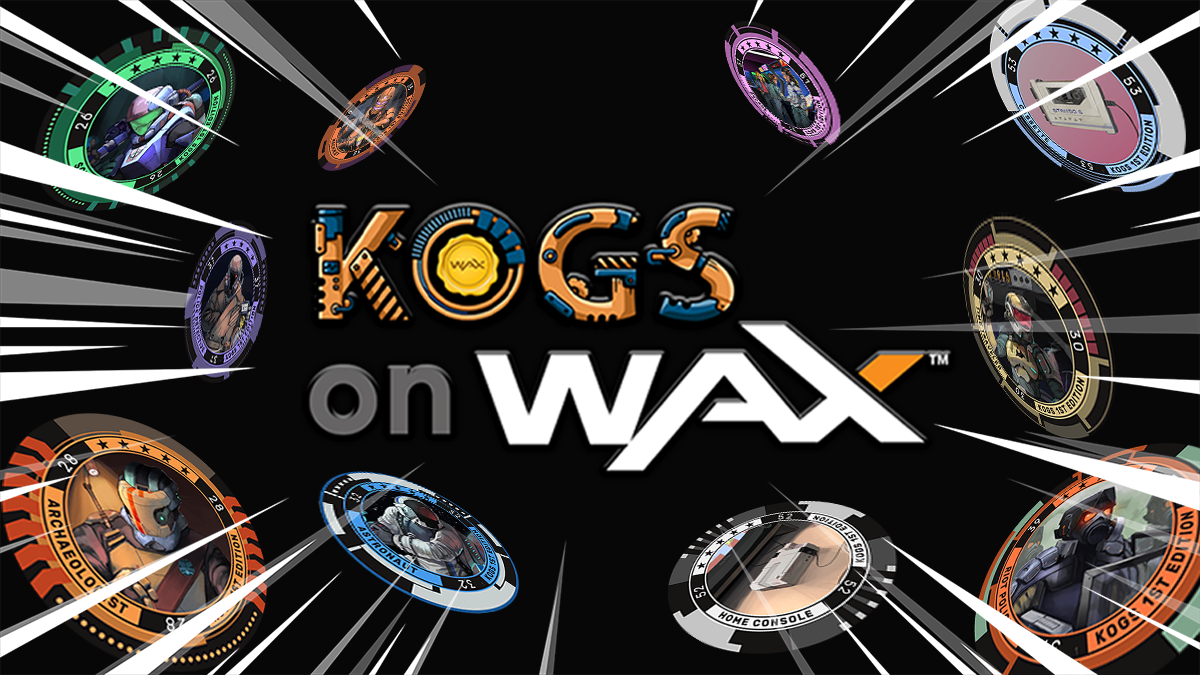 Although there are plenty more projects worth mentioning such as the massive scale at which Prospectors integrated a whole new Yukon world on WAX, Dark Country set a new bar with artwork in the preamble to their own unique take on playable card games complete with tournaments offer real value to both the assets and game itself, the release of exclusive William Shatner never before seen life and career images in the unique form of digital collectible NFT’s originally released in shards, and even the Nifty Wizards WAX based NFT role playing game built on and integrated into Telegram, these NFT collectible firsts surely will not be the last as the WAX ecosystem continues to progress. And although WAX has been tailored towards these types of projects, it is interesting to note some other unexpected and off beat firsts such as the WAX Advisory Council, the Atomic Hub NFT creator, and the transitioning towards DeFi and whole new tokenomics model of the entire WAX ecosystem and chain. 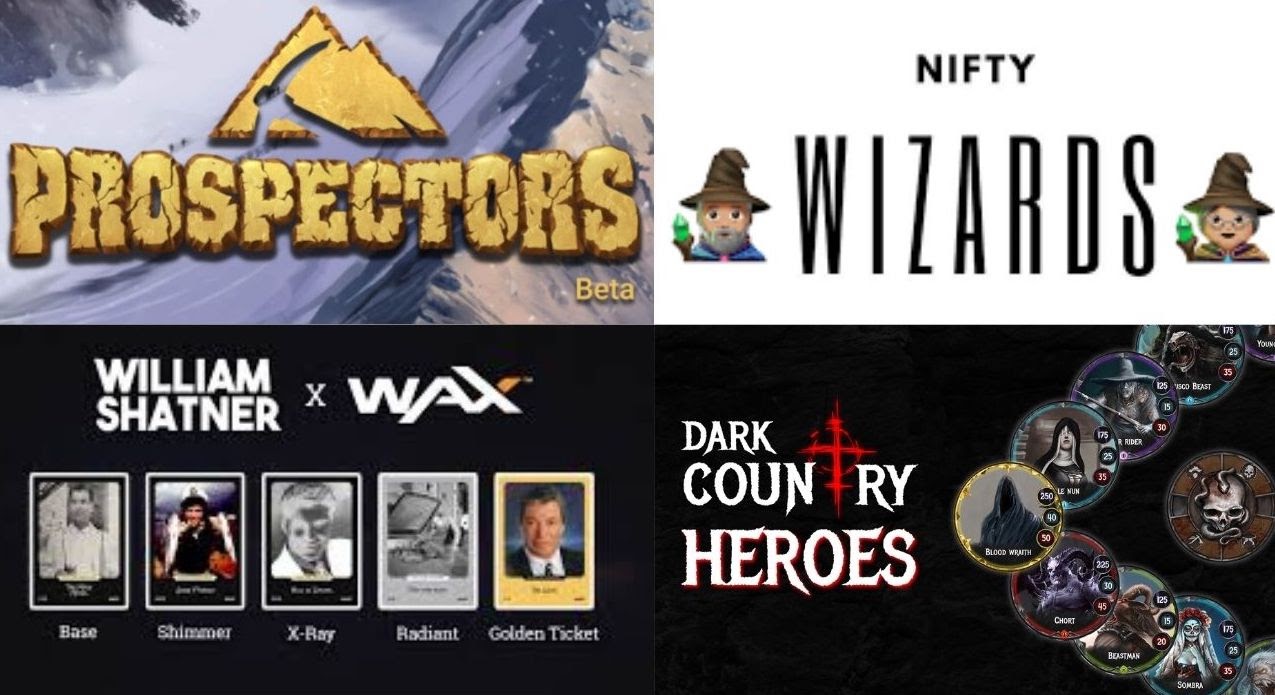 The WAX Advisory Council is a pretty unique feature of the WAX.io ecosystem. WIth the goal of aiming to drive and accelerate the adoption of WAX Blockchain technology by aligning the roadmap with input from a variety of leaders from prestigious global technology, video gaming, entertainment, and other industry leaders and companies, the council is likely to play a pivotal role in the future of bringing WAX to the mainstream as well as the mainstream to WAX.

The Atomic Assets Atomic Hub NFT Creator was another very welcome change to the digital collectibles space. Utilizing this, those wishing to mint their own Atomic Assets NFT’s becomes a standardized and fairly routine process. The ability to create a collection right within the Atomic Hub interface is a very welcome advancement which should help to enable clarity and ease in the whole usability and on-boarding process. Add to that the ability to implement a wide variety of features such as token backing, burning of NFT’s by the owners, and easy transfers simply by adding the account name right from within Atomic Hub, and it seems clear that Atomic Assets has began to run with the trend of WAX.io to continuously push the bar and enhance the space with innovative yet simple implementations. For a complete rundown of the more specific steps involved in the process of NFT creation, check out this Guide: Using the AtomicHub NFT Creator. 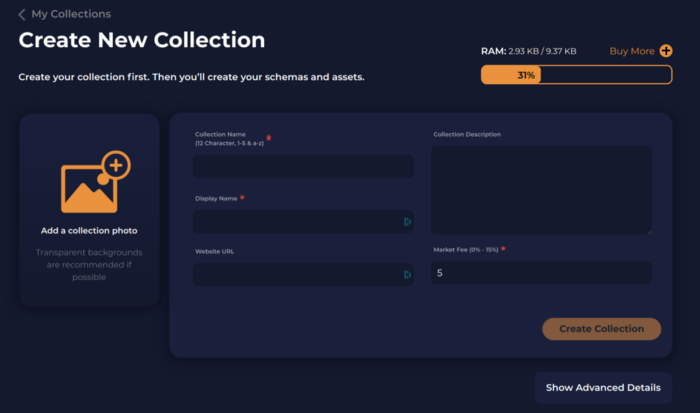 The new WAX Tokenomic Model might just be one of the most fascinating things to come to the EOSIO sphere yet. For those that might not be aware, the WAX token was originally launched on Ethereum before being ported over to EOSIO, so seeing this model offer a bridge back to Ethereum might have been a bit of a surprise. Nonetheless, when you think about all the advantages that Ethereum has to offer especially in the face of how fast DeFi is progressing, it makes sense for WAX to look to solidify as broad a claim into the NFT space which they do best that stretches across multiple spheres.

As the details have been laid out quite thoroughly in the initial press release by WAX found here as well as covered by countless third parties, likely a brief summary of the key points will suffice for the purposes of this article. But before delving into that it should be noted that this is truly a groundbreaking endeavor compiling the original vision of NFT collectibles on WAX with the cross chain transfer and compatibility of the DeFi benefits of the Ethereum blockchain in a manner that benefits to some degree just about anyone hodling some of those WAX or the NFT’s running atop the chain. As broken down quite nicely in EOS Hot Sauce #75, the following outlines the gist of what is contained in the original article linked above. 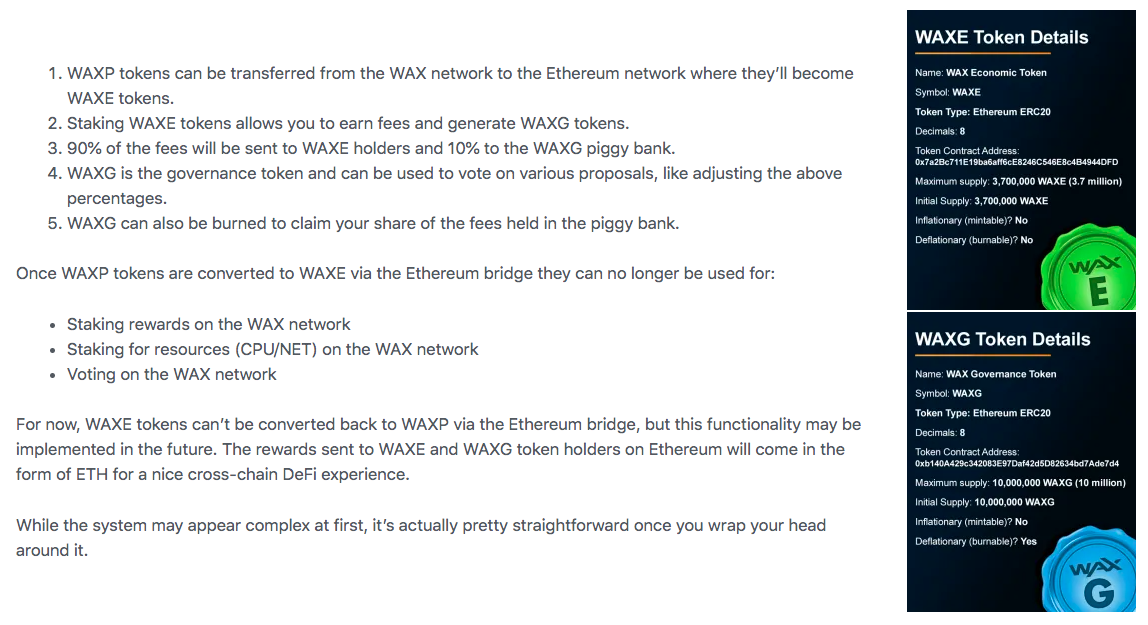 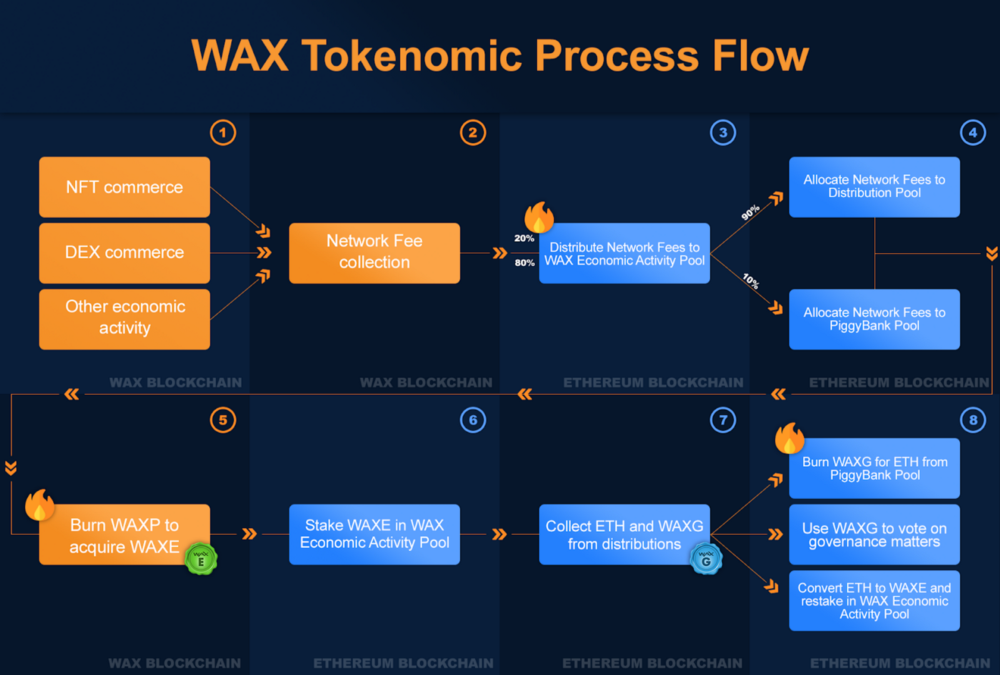 In conclusion, as is apparent, WAX.io and many of those building upon this NFT collectible and soon to be DeFi enhanced blockchain bridged across multiple networks have pushed into the depths beyond the light to bring about something quite unique and new to the world of digital goods and services. Although nothing is for certain, it seems pretty likely considering how early in the space it actually is, that if what has thus far transpired by this small fringe group of blockchain enthusiasts tailored towards collectibles, gaming, and digital goods that this is just the beginning of much more native ingenuity and practical applications are to follow. As we all have come to know things in this space move rather quickly once they get going, and considering within the WAX ecosystem they seem almost exponential that at least for the foreseeable future WAX.io and the projects that call it home will be tough to dethrone as the tailormade collectibles blockchain industry leader.