Blockchain Heroes: The Good, the Bad, and the Ugly 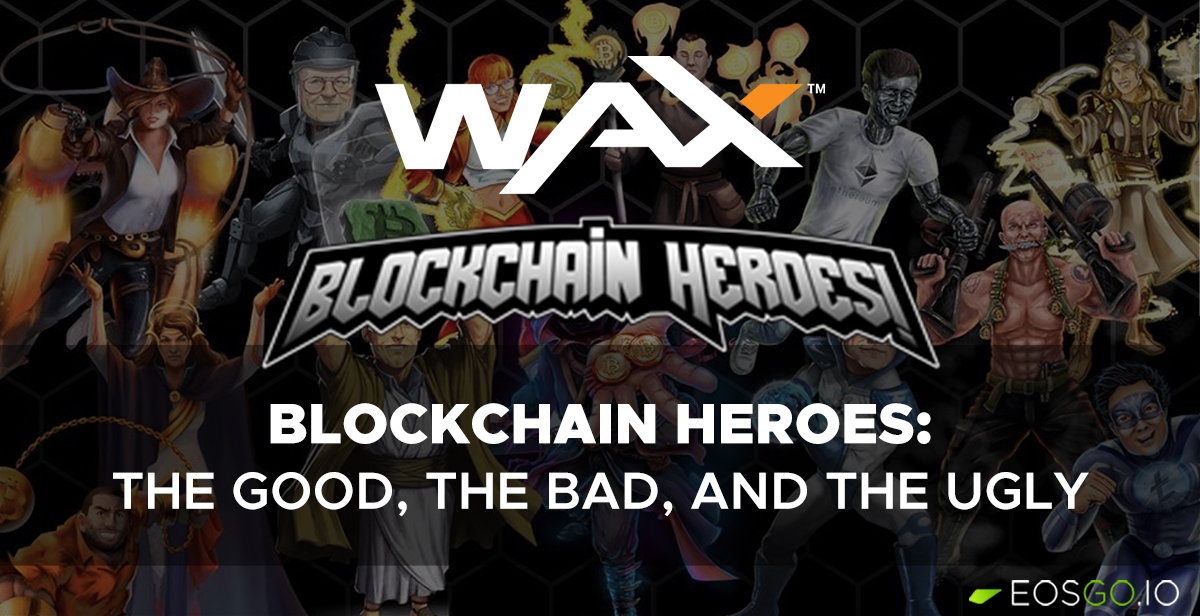 Blockchain Heroes recently launched onto the WAX.io scene on August 8th, 2020 with a stir as one of the newest and most anticipated collectibles and NFT’s in the space. The launch consisted of both pre-sale and sale events across 3 platforms whereby those with the ambition to purchase packs with WAX could participate. In contrast to some other collectible launches on WAX.io such as Garbage Pail Kids and William Shatner NFT’s whereby fiat purchases were accepted via credit card, purchase of packs was limited to WAX tokens only. The Blockchain Heroes pre-sale and sale sold out in mere minutes and left a range of high emotions from excitement to anger rippling throughout the space. (1)

How it worked was pretty simple. For the pre-sale those wishing to scoop up some packs needed simply to login with their WAX account to Atomic Assets Atomic Hub (https://wax.atomichub.io/) or BCHeroes on Myth Market (https://heroes.market/) and wait patiently for the packs to become available. Although login options for Atomic Assets included Scatter and Anchor wallets, Myth Market and the official Blockchain Heroes homepage (https://bcheroes.com/) phase 2 sale one hour later was restricted to WAX Cloud Wallet login only. This in itself caused some issues as the WAX Cloud Wallet became bogged down with requests and left many would be purchasers essentially unable to sign the purchase transaction and receive their cards.

Using the Atomic Hub Scatter or Anchor wallet login methods did not seem to present any bottleneck, however these packs could not be opened from within the Atomic Hub directly and needed to be moved to an account that enabled a WAX Cloud Wallet login on the Blockchain Heroes main page. Although not such a big deal compared to those who wanted to get cards but couldn’t, this did mean that those utilizing the alternative login methods to the WAX Cloud Wallet needed to facilitate one extra step in order to open their packs - which in this case is relevant as the first packs to be opened had the lower mint numbers of the cards in the packs.

Naturally there were some pretty angry people in the few minutes after the packs for both the phase 1 pre-sale and phase 2 sale voicing their thoughts in the official telegram channel. Despite overheated tensions, even those that initially lost their cool seemed to recognize that the fault of the bottleneck was not something that the Blockchain heroes really had control over, and that this was rather an issue with the WAX Cloud Wallet. Complaints ranged from not accepting fiat payments for purchases to just plain bitterness towards not being able to get lower mints that had the most amount of value. Realistically however, no matter what was done there will always be complaints and it seems that after the GPK Tiger King launch fiasco whereby credit card payments in fiat had processing difficulties leading to some users not being able to participate in the sale that the Blockchain Heroes team decided to give it a try with only WAX.

Despite some hiccups which have supposedly since been dealt with with an upgrade to the WAX Cloud Wallet itself, the stats for the Blockchain Heroes launch are quite impressive. According to DAPP Radar,

As solid as these numbers may seem, the Blockchain Heroes team actually noted that had the hiccups with the WAX Cloud Wallet not existed that at the pace that was seen the sale would have been over in the first 5 min. Add to that the WAX team reporting that 25 times the amount of traffic ever before seen by the WAX Cloud wallet upon the release, and it’s understandable that not everything went off as smooth as originally planned. (2)

Of course nothing is perfect, but over time the majority of people in the community seem to have come around on the fact that overall the process was one of the smoothest yet, and in general experiences in the space with continual upgrades by both projects themselves and the WAX Cloud Wallet team has helped in bringing about a progression towards a better product and experience over time.

Although the experience may have left a sour taste in the mouth of some, for the majority it was an event to remember. Not only were the many fans the project built up previous to the launch excited by the prospect of something within the collectibles realm completely new, the experience itself of opening the packs and seeing the cards was quite fascinating. In fact shortly after the phase 2 sale had come to a close being it too had sold out, founders Joel Comm and Travis Wright took to the air on their Bad Crypto Podcast channel for a release and opening party where community members could jump in with other like minded individuals and share in the fun. The room itself was a buzz of excitement as a variety of people took turns sharing their screen to open both the 5 card hero and the 25 card Titan packs before a live audience. Some even ended with a surprise pack from community members who out of the goodness of their hearts sent some over to users who may have missed out on getting into either of the phase 1 or 2 sales in a show of solidarity towards what was really important in all this - that being the cards and experience themselves.

The Mythology of a Brand

Blockchain Heroes consists of 50 original characters based loosely off of celebrities in the blockchain and crypto space. There are 5 classes of heroes ranging from Creators, Champions, Defenders, Boosters, and Celestials each consisting of 10 heroes each. 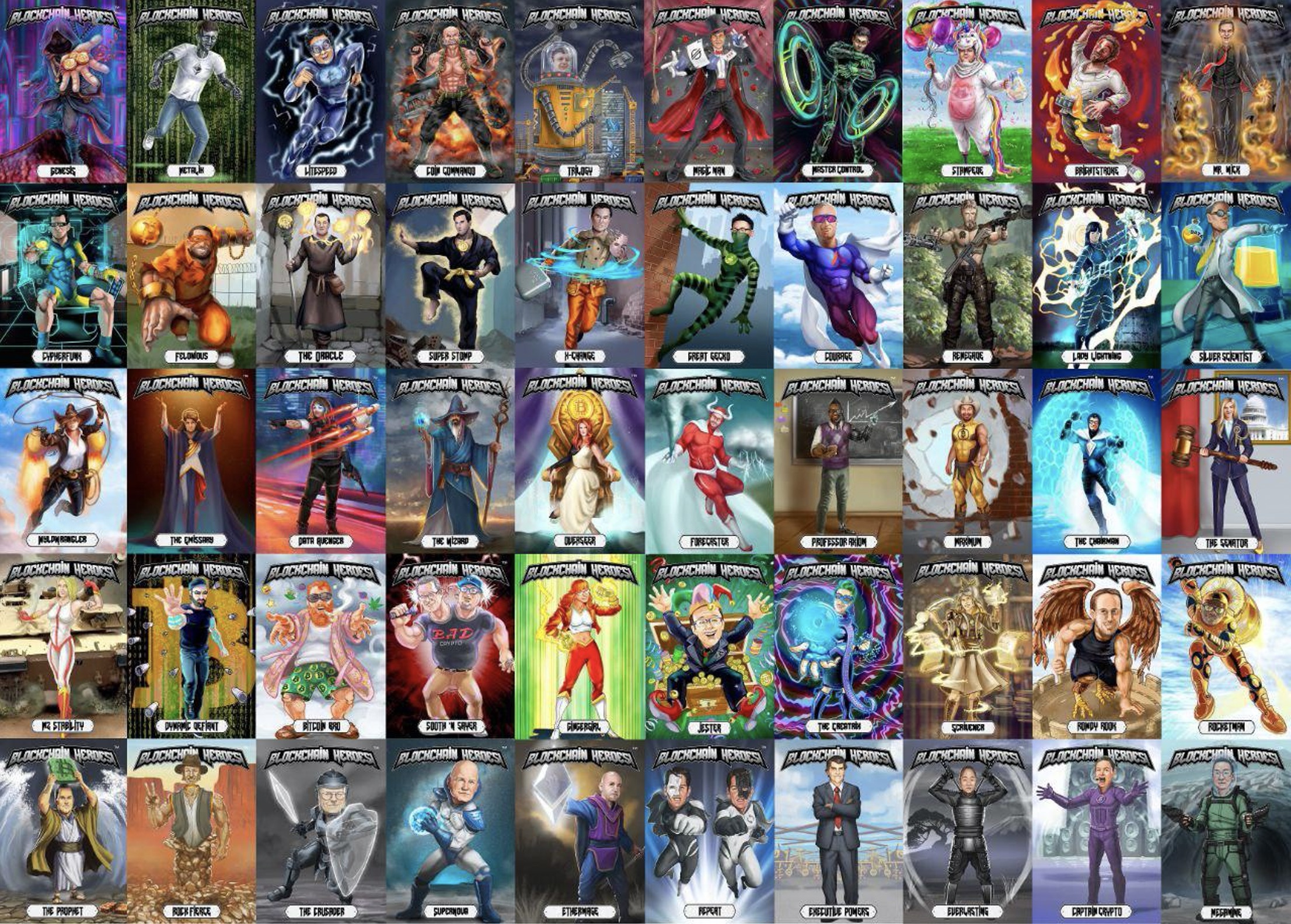 In true full fledged artistic form, every card comes complete with some pretty stellar art depicting the ‘hero’ on the front, and as well as a character introduction sketch complete with a little slice of real world embellishment forming a whole narrative of yet another piece of history in a Blockchain Heroes mythology.

The type of the card series as well as the Hero’s number in the complete set is depicted in the upper left corner alongside the introductory mythology on the back of every card. In addition to cards, one sided stickers of each of the Blockchain Heroes were also included in the packs for fans to collect and trade.

Due to the process whereby the cards are minted upon opening the packs, it is impossible to know exactly how many cards of each Hero and each type will ever be created. This actually adds an interesting dynamic to the whole process as cards are not predefined to any packs and certain rarities have the potential to be minted anytime anywhere a pack is open in accordance with the underpinning algotherim.

To have a look at all these card types in their full and complete static and animated glory head on over to any of the following locations:

In addition, Megaverse bonus heroes inspired by or in partnership with other projects have also been released. At present these consist Telegraphico (Coin Telegraph), InKredible (Kred), CoinGenius, GYB Piggy (Grow Your Base), Supermiles (Upland), Atomic Atom (Garbage Pail Kids), Subatomic (Atomic Assets), and The Uplifter (Uplift.Art/Upliftnation). These were or will be released in a variety of ways in a variety of styles and supplies. (https://blog.bcheroes.com/megaverse/).

Varieties of NFT’s in the space and their uses are potentially infinite, and so too are the combinations of uses they may possess. Blockchain Heroes at present would fall obviously into the collectible cards category, and although there have been rumors circulating from mostly the fans of a new series being released or even a game in which the Blockchain Heroes may appear, nothing in terms of an official announcement has been released.

However Blockchain Heroes has already put into action a couple of adaptions beyond the special card drops and releases noted above. The most recent and perhaps most exciting might just be Project: Arcane Rise. It is a fun little write up in tune with the mythological factors surrounding the Blockchain Heroes universe that is well worth checking out if you are into that sort of thing, but basically, users were able to ‘burn any 100 Series 1 Blockchain Heroes cards with pre-registration in exchange for a new, exclusive Legendary variation of a Magic-using Hero.’

The whole concept behind this is quite fascinating really in that it adds another level of gamification for collectors to partake in within the Blockchain Heroes ecosystem. It brings together a unique form of engagement that will impact the whole series by taking away from the common supply and adding something new in return. What will be left no one will know, and it is possible that some common cards could become much more rare than others after the event, but only time will tell.

What Can We Learn From Blockchain Heroes?

Collectibles have always been something that mystifies both those with interest and those without, albeit in very different ways. Although Blockchain Heroes is not the first original trading card series to be dropped on the WAX blockchain, it is the first that has tackled the concept of some of the best and brightest in the space we currently call our playground.

First and foremost Blockchain Heroes Series 1 cards are set to go down in history as being the first of their kind in a couple respects. They will also likely hold a special place to those looking at the future of how to release such cards and carry positive momentum through past the initial release. When looking at some of the previous releases such as Garbage Pail Kids or William Shatner memorabilia collectibles, one stark difference is the engagement of the project founders to keep the news coming beyond that of a tradable collectible. Add to this it’s unclear just how far this extension will go, but one thing that seems likely from the hype and interest in the project is that Blockchain Heroes is just getting going and is a truly unique value add to what the WAX.io collectibles space is fast becoming.

(2) Blockchain Heroes Sell Out In 30 Minutes