The Viability of a Blockchain: When Liquidity Strikes Back 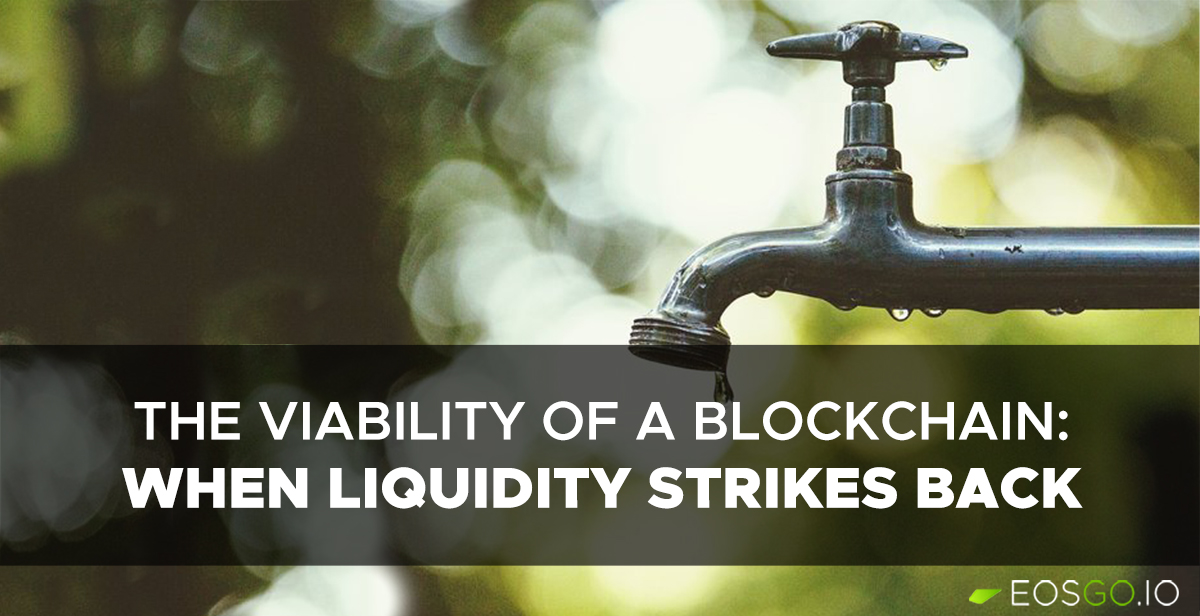 After a matter of time in this space it becomes clear that all blockchains no matter how fervent or adamant their supporters have both their positives and negatives. In their present state blockchains in a way are the opposite of nature. When looking at the natural world it is easy to recognize that everything is in existence because it is perfect - for if it was not perfect it would have never came into existence and if it failed to be useful or beneficial it would have since become extinct. In the world of blockchain this is simply not the case, as no blockchain is perfect, many are outdated dinosaurs, and balance and harmony between their beneficial attributes and hang ups is simply at this point in time non-existent. Things however are beginning to change which in the grand scheme of things is not only good but necessary for the space to progress.

EOS is no exception to this and even though from a pure technological perspective it seems to surpass just about everything else out there currently on the market, the EOS ecosystem seems to be plagued by issues that hold it back both of its own organizational accord and as a byproduct of its image in the space in general. Despite concerns over centralization, governance, VC funding, and the ability of Block.one to lead the community into the next wave of development, adoption, and prosperity, one of the largest hang ups from within the EOS space is the amount of overall market liquidity.

In comparison to the project's operating on the Ethererum blockchain, those operating on EOS and other third generation blockchains departing from the ETH ecosystem seem to be constantly scrambling for ways to get investors and users into the mix. At this point in time the world of blockchain and cryptocurrencies is comparatively small compared to regular markets and other areas that dominate the globe in technological, social, and business capacities. For this reason there seems to be a built in funneled filter into the space whereby the majority of users that presently use any of the third generation blockchains have first and foremost moved from the Ethereum space for some reason here or there. That is not to say that there are no first time blockchain users jumping straight into EOS or EOSIO blockchains, but in the here and now of the space this is not the common case. As time goes on and blockchains like WAX with a focus on NFTs and collectibles, Ultra on gaming for the masses, Telos the ability to have a viable blockchain for daily transactions at minimal cost, UX network on regulatory infrastructure and compliance, Boscore on more optimal IBC solutions, and Proton and FIO on creating an avenue for better on boarding of the masses, in time the liquidity crisis that seems to haunt EOS and EOSIO might self correct as more and more beyond the space filter in here first, but until that time EOS seems poised to be primarily dependent upon those already within the broader crypto space.

This aspect of dependence however comes at a very high cost increasing the already alienated projects built on and operating on EOS especially in that getting into the space even though it might be more cost efficient to utilize the underlying EOSIO technology. For new users and those initiated into the Bitcoin or Ethereum spaces, the necessity to have to jump through so many hoops just to be able to use or transact with the variety of projects on EOS hinders many would be explorers despite the many great wallet options available. Of course there are projects like Wombat that offer simple solutions to obtaining access to the EOS ecosystem, the fact remains that many in the broader space have serious issues with the necessity to pay to have private keys released or go through the hurdles of paying for an account from a third party service even though in the long long run this is much more cost effective. Add to that recent issues with resources and it is easy to see why the majority of Ethereum network users continue to pay exorbitant transaction fees to feed their DeFi, NFT, or gaming crazes. In a way as is often the case, it is better the devil that you know than the one you do not understand.

Luckily there have been two very big avenues into the space that have already begun to reform the long standing issue of liquidity especially on the EOS chain in the form of the addition of EOSFinex and the creation of pTokens in particular.

As reported in Bitfinex Liquidity EOS Security with Eosfinex and Bitfinex Liquidity Directly on EOS Via Bitfinex Starting Tomorrow right here on EOS Go, Eosfinex enables access to “Bitfinex markets and their liquidity directly with an EOS account, while maintaining the blockchain’s level of security. This is truly an innovative solution, allowing for the first time users abilities to take advantage of the performance of what was previously a centralized exchange, with the potential of blockchain decentralization” whereby users will retain full custody and control of their assets at all times.

In order to take advantage of this users simply need to head on over to https://trading.eosfinex.com/, login to the exchange via Scatter or Anchor wallet, choose a pairing to place an order or make a trade. 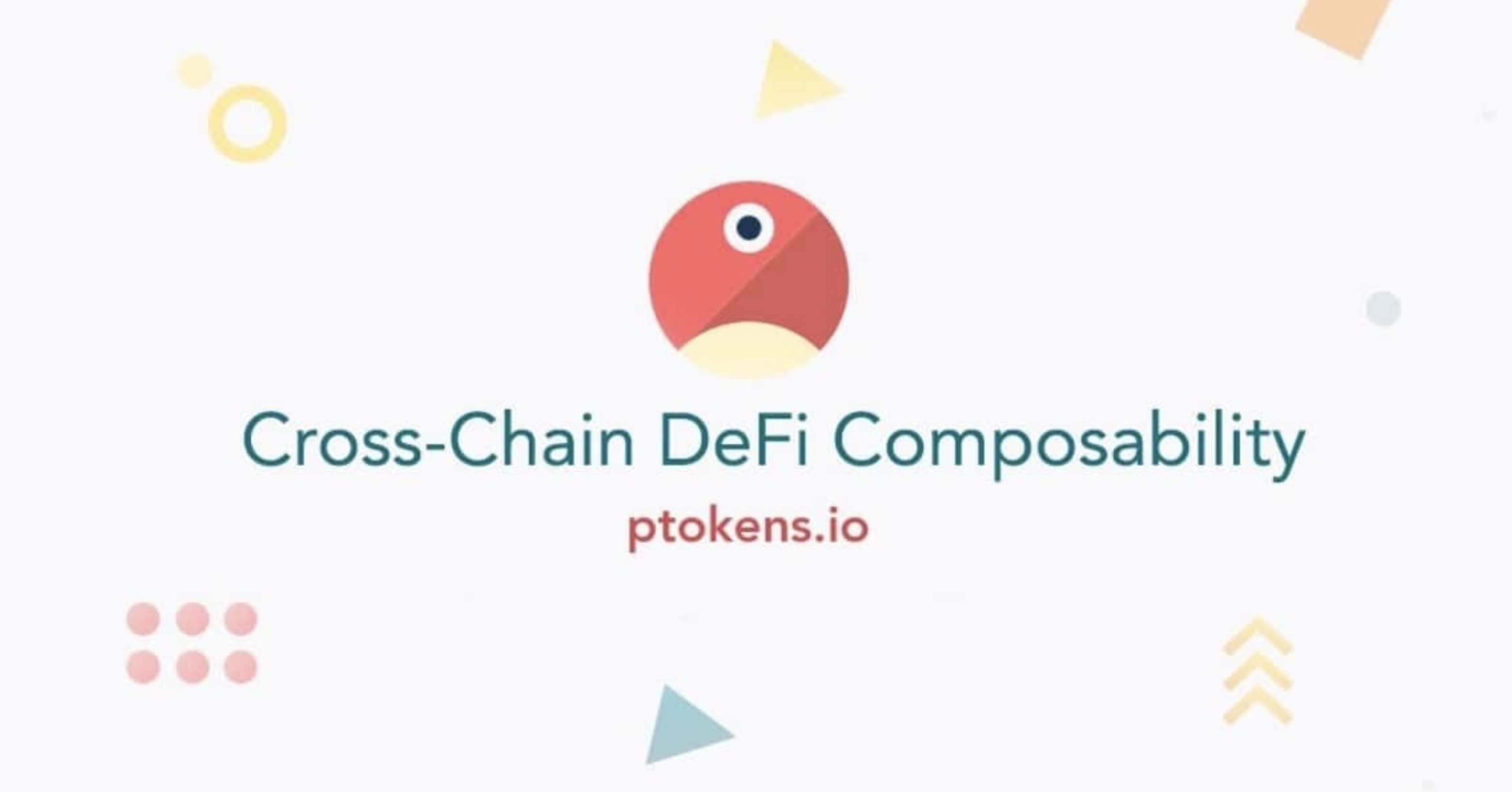 At the time of writing the exchange lists 13 tokens in a total of 17 pairings. The supported tokens come from a mix of the native EOS blockchain and bridged ptokens ported over from other blockchains. The supported tokens at present are pBTC, pETH, USDT, pLTC, EOS, pYFI, pLINK, PNT, pMKR, DAPP, EOSDT, NUT, and IQX, however Eosfinex is in the process of exploring other tokens within the ecosystem to add.

One of the largest changes to the EOS ecosystem of late is the addition of pTokens to the network. “The pTokens technology was designed to overcome the inherent walled garden limitation of blockchain protocols” (ptokens.io FAQ). With these tokens liquidity from beyond the EOS ecosystem is easily absorbed via minting tokens which are always pegged in a direct 1:1 ratio in price to their native blockchain counterparts. Other attributes of pTokens are:

The pToken system allows for anyone to mint supported tokens on the blockchain of their choosing. The user simply “deposits on the relevant pTokens contract a certain amount of the underlying asset that he wishes to convert into its 1:1 pegged representation and provides a destination address where to send the corresponding pTokens”. In the case of minting tokens on the EOS blockchain, the user simply needs to login to the pTokens dApp at https://dapp.ptokens.io/ to their EOS account under the correct pairing with Scatter, Anchor, or TokenPocket wallet. From there an address can be generated that will be the receiver of the supported token one wishes to deposit and the tokens will then be minted to the attached EOS account. Of course users can also ‘peg-out’ or redeem their pTokens held on the EOS blockchain by providing a native token wallet address involving a process where the equivalent amount of tokens that are selected on the EOS blockchain will be burned and sent back to their native land.

Beyond the Eosfinex exchange, pTokens have been adopted by a variety of projects in EOS space. The popular DeFi platform Defibox has integrated a variety of these tokens into their network so that users can utilize them in the popular areas of swaps and liquidity pools. The Vigor protocol has added pBTC into their lending and collateral bases as well as allowing for users of the Vigor App to take out pBTC loans against their collateral as well. PizzaLend and DeFis Network have also integrated pBTC tokens into their platforms for users to take advantage of in multiple ways. Even Boid with the Launch of their new NFT card series has integrated pBTC tokens into their gamified donation system alongside other EOS and EOSIO tokens.

When Liquidity Strikes Back

Although the EOS ecosystem is far from being as liquid as its much older siblings Bitcoin and Ethereum, the ability to bring about an easy to use and well known bridge in the form of pTokens in combination with the provision the Bitfinex/Eosfinex connection cannot be underestimated. As fees on Ethereum and Bitcoin continue to climb, there is likely to be many non agnostic blockchainers looking to utilize and park tokens into high yield products or utilize borrow and lend functionality to increase farming gains on EOS. As the possibilities for DeFi on EOS continue to grow the ability to attract more users offers serious potential capital drives that the walled in EOS ecosystem has simply not been privy to up until this point.