Wrapping Up the Year on WAX.io 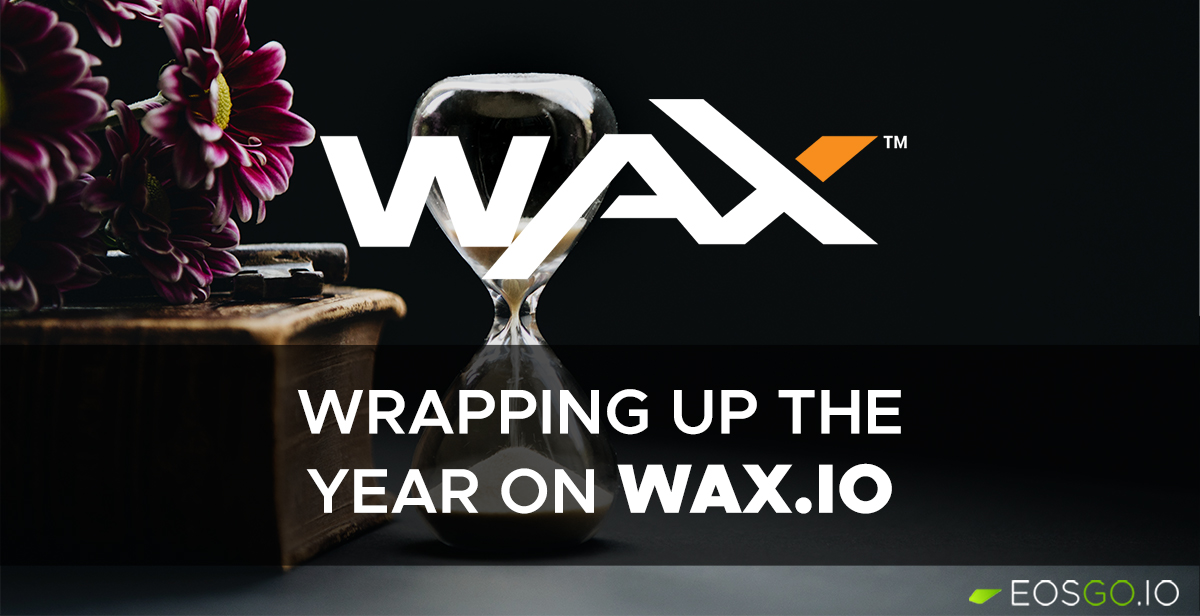 It has been an action packed year thus far on WAX.io with a ton of partnership and release announcements, many of which we have covered in our EOS GO weekly news and past blogs. Despite the incredible amount of progress and releases however, the final 2 months of the year are as action packed as the previous ten. In this first of a two part series, we will give an overview of some of the most prominent releases in the WAX space which just so happen to have been scheduled for the month of November.

November started off with the rolling out of another iconic brand in the release of the very first Atari NFT’s. These went on sale officially on November 4th and consist of 6 rarity levels with 67 assets each. Although maybe not the most hyped event of the month, there seemed to be a lot of people jumping into the release to pick up their stake in the Atari NFT asset realm.

Although coming under some scrutiny by some of the community, the assets themselves are pretty cool and represent a nice paradigm shift towards melding the old with the new. As a straight up series of collectible NFT’s it really is hard to say just how much value long time fans and supporters will attribute to the series. For those with a yearning towards the nostalgic reimagined in fact, Atari could very well be one of the most under-rated collectible events in the entire WAX.io metaverse when the masses from other blockchains and beyond trickle in.

For more on the various rarities, cards, and the series in general check out https://atarinft.io/

Likely one of the most anticipated on this whole entire list, Tribal books plans to bring a whole new layer to what they perceive as blockchain card gaming. From the team over at Prospectors.io, Tribal Books is a free-to-play online digital collectible step-by-step NFT-card game whereby players compete in each round using cards and magical forces from the Tribal Books.

Cards come in 6 levels of rarities each with their own unique design and colorings. Due to the structure of the game, the more rare the card, the greater advantage they give their owner in the game play against vanquishing their opponent.

“Different types of cards, divided by tribes, use-cases, rarities, and elements. And all this info, as well as the energy you need to use the card, the power of its influence, you can learn from the card appearance” (Learn More From the Tribal Books Card Experience). 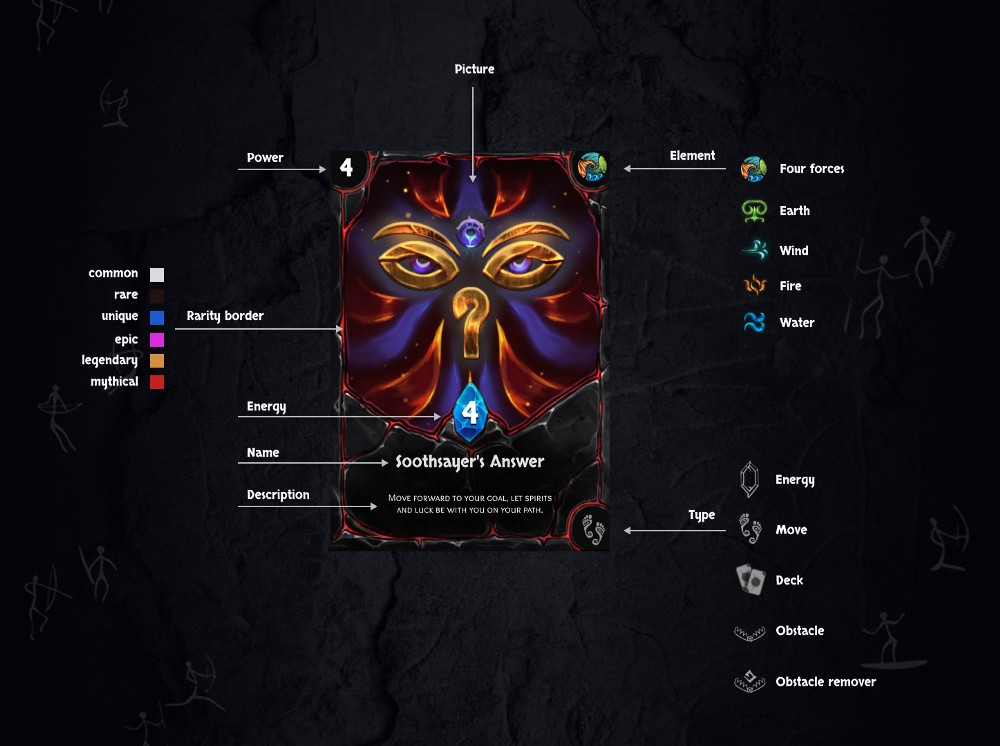 What really makes this P2P card game unique however is the backstory that has been weaved into the narrative via Tribal Books - all powerful artifacts tying all magical forces for each Tribe passed down from the ancients together into a powerful resource for players to tap into. SImply by ‘playing and winning the user of these books are able to archive knowledge which acts as a key bringing forth the next magical force within the Book of Tribes.’ Being an NFT, each Tribal book along with all the forces stored within them are tradable assets alongside all the other NFT cards in the game. True to form, these being what the entire game revolves around were the first to go when the packs for the game went on sale on November 11th.

For more check out the Tribal Books homepage at https://tribalbooks.io/

Alongside Tribal Books above, the hype around this event as seen by community involvement has gained almost a cult following in the space. Although UpliftArt has been around for a while and even completed an auction previously whereby they released the first full length music video as an NFT on the blockchain, this is actually the first event that will allow users to purchase assets as has become custom with releases in this space.

The series itself is quite extensive and based around a whole new NFT music video ‘I’m Not the Bubble’ reimagined by Corey Cottrell and produced by mBlu. Within the series of cards there are 7 levels of rarities with the lower rarities some specialized artwork and mini clips as pieces coming from the highest rarity level made up of variations of the complete ‘I’m Not the Bubble’ music video itself.

Despite the quality of the music and art involved in the entire series, two really interesting aspects have been incorporated by UpliftArt which has contributed to the driving of the hype behind the release.

First, prior to the November 15th main event encompassing the sale of crates loaded with a variety of assets, the UpliftArt community was able to get a preview of what was in store through a prequel series of community crates dropped to those which were active in various ways in the community.

Secondly, UpliftArt in collaboration with Atomic Assets actually pioneered an entirely new release model for this one, and for the first time ever was able to release assets in crates that were pre-minted. Unlike other projects that award mint numbers to first come first open users upon card reveals, what this means is that those partaking in the UpliftArt ‘I’m Not the Bubble’ Series One events all had an equal opportunity to get low mint cards no matter whether the crates was first or last opened.

However, as to not completely change the hype model associated around so many projects in racing to get the lower the mints, UpliftArt also developed something which became known as #TheMintSprint which allows users to burn to upgrade either 10 or 25 (the complete set) of the same rarity level and receive in return, a random asset from the rarity above with the chance for a mythic or a collectors edition full animated music video NFT in return. In a sense, The Mint Sprint model pioneered by UplfitArt and Atomic Assets has completely changed the paradigm of perceived rarity and mint assets, as with so many combinations and ways to play the game, it really is impossible to know which cards will truly end up being the most rare. 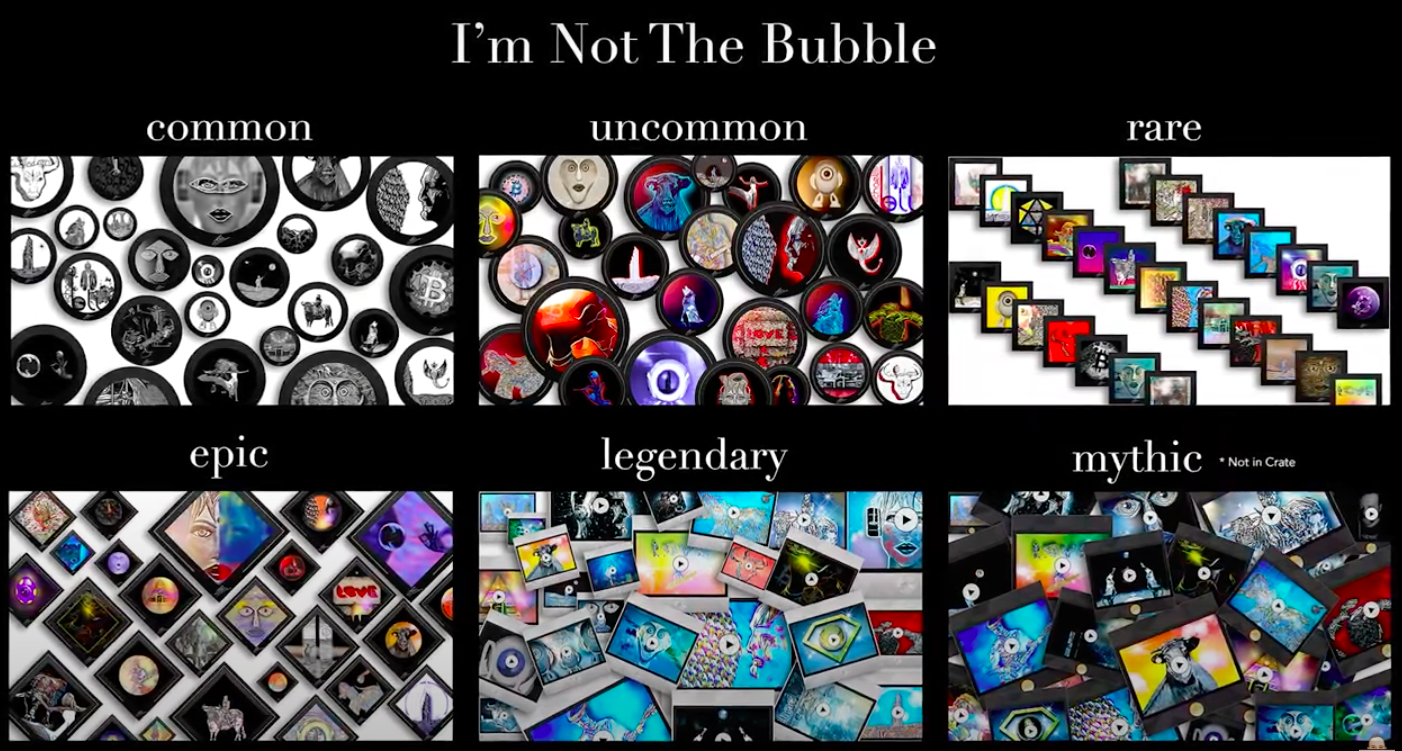 And if all that were not enough, the added bonus of knowing that fifty percent of all proceeds will go towards enabling their affiliate organization upliftnation.io to support partner Haitian Roots with hopefully upwards of 50,000 dollars to aid in helping to keep children of Haiti sheltered, fed, and educated in one of the most trying times for the country in recent history.

To learn more about UpliftArt and the ‘I’m Not the Bubble’ Series One Drop and main event check out their many extensive press release announcements and blogs on UpliftDao.com as well as their homepage at https://uplift.art/.

Lot’s of things happening for this gothic style trading card game based on the WAX blockchain. First of all, November actually marks the one year anniversary since the purchase of the domain name darkcountry.io and essentially the beginning of the project, so seeing this as the month to churn out a little more into their ecosystem should be of little surprise.

Always seeming to be pushing the boundaries with their amazing conceptual art, the gameplay and ecosystem they are aiming to build around it, one interesting first for the month of November was the incorporation of the Blockchain Heroes cards into the Heroes Fight Club Tournament allow those holding BCH cards to compete directly with those holding dark country cards.

The main event however for Dark Country this month is the release of the unique limited DC Cultists packs with new characters, mechanics, and even specialty bonus items were released in a limited 3 hour sale on November 19th. Cultists being a type of creature being pretty weak individually but together with their swarming style become significantly stronger. Due to the fact that the more cultists the player has, the stronger all others will become, will give players an alternative option towards building their customizable Dark Country play deck. In addition, a collectors aspect has been incited whereby the first 20 people to obtain all cultist cards of the same border color will have the ability to claim a unique mythical Cultist Hero. And to really drive the collectable aspect home, among those 20 Dark Country will randomly select a winner of an original DCC Hero. Add to that the inclusion of some bonus cards representing some of the pop ups in the game which are purely for collectible purposes, and the release holds the promise of changing the current landscape of the collection and game towards incorporating some pretty cool additions.

Just after this release, Dark Country Alpha 2.0 will also go live on November 20th for those with early access tickets, giving the team and players a chance to optimize all that they have been building towards in this new gameplay series for the past year.

As much as there is to unpack there, Dark Country will be back in the news in December as they prepare for a big partnership launch as an event or possibly even a series as they move into new realms in forging win-win cooperatives with different platforms, blockchains, and regional representatives.

Alien Worlds will continue to add to it’s cross chain smart-contract decentralized metaverse combining DeFi farming with NFT card-based strategy with the two auctions concluding this year on Alien Worlds site offering for eosDAC tokens on November 20th, and a special Land Pack Sale on December 4th which will offer the only chance to obtain land NFT’s.

If you are not familiar with Alien Worlds, it is a pretty innovative concept and interesting structuring allowing for the fungible ‘Trilium’ token simultaneous records and transactions across both the WAX and Ethereum blockchains. Those interested can learn more on the Alien Worlds homepage at https://alienworlds.io/

Finally, although details are a little sparse at the time of printing, it is worth mentioning that the long anticipated Street Fighter NFT series is set to release sometime in late November of December this year.

And speaking of December, we here at EOS GO will be back with part two of our 2020 WAX.io end of year release special, as well as our take on the overall WAX ecosystem and some of the projects stack up in the yearly rear view.