Voice: Beyond the Hype 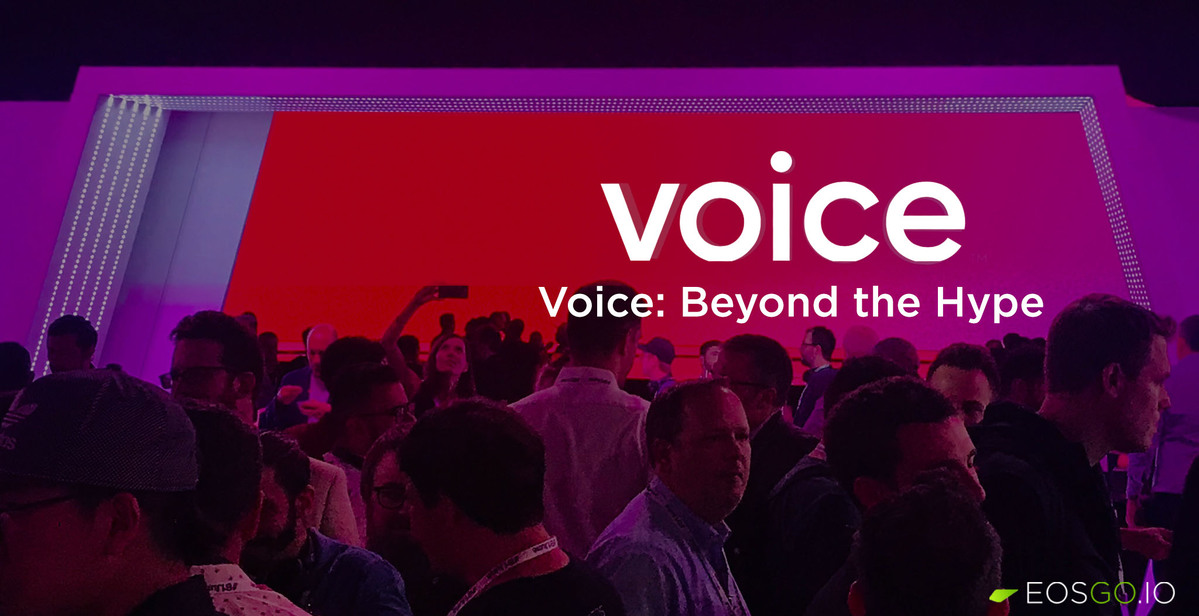 With the beta launch of Voice just around the corner these sure are some exciting times, especially if you feel like you live in the right place at the right time. Unfortunately for many of us, we may not. That is not to say I or the community have any serious issues with Voice, where it is aiming, and what, in time, it has the potential to achieve. Quite the contrary actually, but with it so prevalent across the EOSIO space recently we thought now as good as time to share some reflections.

In case you missed it, Voice released a blog a couple days ago stating that the beta would be rolled out in the USA (to start) followed by a steady stream of English speaking territories and finally, globally (https://voice.com/blog/beta-in-the-usa/). To be frank, although understandable, this was a little depressing. Unfortunately, due to this announcement the best we can look forward to at this point is another announcement followed by a third, and potentially who knows how many more until the non-English speaking countries the majority of the community resides in comes up. In other words, for the time being at least, we shall have no voice on Voice, something we have been looking forward to for quite some time now. On the bright side of things, this information was given a couple days early and we were able to prepare ourselves for the let down while the rest of the EOSIO community residing in the States will go mad this 2020 Valentine’s day. We’ll have to make the best of it living vicariously through the voice of others as they throw their words to the blockchain and begin racking up those followers.

Despite all this, in my preemptive anticipation for what is to come I have been going back to ponder the implications of this for the broader crypto space and real world in general.

Going back to the original one year anniversary B1 announcement got me thinking. Many of us spend way too much time on conventional social media platforms, so much so that I personally began to become angry with the same old narrative spinning and mindless feeds full of personalized self indulgent spam, percolated ideas of mass regurgitation, and a serious lack of critical mentality. Long story short, for the purposes of this piece all that is important is that eventually I shut the whole thing down and I know others who did the same.

It was around the same time that I first stumbled my way into cryptocurrency and in time, into the crypto social feeds and networks promoting this wonderful space we have all come to know and love. Not much really changes in the crypto space from that of the real world when it comes to social media platforms unfortunately. Coming from this perspective, it should be somewhat understandable why the community was totally entranced with what Dan and Brenden had to say about moulding this new social experience. A lot of what they noted about traditional platforms were things that I knew I had a problem with but didn’t at that point really have a fix for. The idea that KYC was intended to alleviate the problem of algorithmic bots filling up feeds with what whoever programmed them wanted us to see, the notion that all users would be tied to a real person potentially making people think before they posted, and the fact that the token was said to have no real intrinsic value beyond that of the platform all captivated me. Although there are others, these are some of the features that we, at EOS Go are interested in seeing how they work out throughout the trials of the beta and beyond.

When it comes to KYC crypto people are not always the most forgiving. Many OG’s in fact seem to be in this space with the notion that any platform that asks you any personal information should be dammed straight to the depths of hell. Although we can see where they are coming from, we are under the belief that at least for right now, there is no point in going down that road any farther than is necessary. Looking back over the last couple of years just think about how much flack projects like Worbli had in regards to users having to KYC. Believe what you may, but the reigns to any empire are not handed to those who try to bring them down without any qualms. In this sense I feel that Worbli has gotten it at least partly right in that they are looking to compete with the legacy system from the inside, and in some regard actually do it better. That is not to say that everyone wants to be part of the legacy system, but from a financial sustainability point of view it makes sense. Even B1 came under fire and had to bend somewhat to the powers that be to ensure future although not guaranteed smooth sailing.

Add to that there are so many cynics in the crypto space - those that refuse to look at any project but their own and constantly bash the short comings of others. The BTC maximalists hating on everything that came after, and the ETH old schoolers refusing to acknowledge the value of some of the newer protocols - how will their reception of Voice be? Will all of these people that hate EOS for the fact that you have to pay for an EOS account drop all their bias and come on board? Once they do, will they Voice their approval and praise that they can finally get an EOS wallet for free? Let’s face it, there is far more going here on the animosity front from the staunchest of EOSIO critics than almost anything B1 or Voice can accomplish without first the achievement of world domination…

And what about the traditionalists that have no idea about blockchain. Will they be the first to leave the Facebook’s of the world and head on in as well? Just as the majority of people in the world are completely oblivious to the evils of the modern financial system as they have no inclination to care about much beyond their own inner world, I suspect the same goes for the majority of people that utilize traditional social media. If they have not cared about these corporations polluting their feed and stealing their data up until now I highly doubt things will change enough to move them too quickly. In the end we suspect Voice will win a lot of them over, but it will take some serious promotional persuasion by those they idolize to get them there, and that is just the young and hip amongst them. Don’t fool yourself, without their approval grandma will never join - what does she care about the modern world beyond photos of her grandchildren that she sees far too little of anyway because they are always fooling around on online games and this crazy thing they call social media.

Crypto people are crypto people and then there is the rest of the world. Run some fancy algorithms and apply that to us in the EOS space and hopefully you can see where I am coming from, there really are not that many in the world that are looking forward to Voice swooping down and saving us all.

Despite all the above, there is no denying that Voice has a lot of good things going for it: the lack of speculative token potential that ran up many other social platform ICO’s and token sales back in the day which has left a bitter taste to all those that fell prey to the hype; the ability to give users an experience that with their financial war chest has enabled massive staking of CPU and RAM resources; the potential awarding of free EOS accounts to all who register and the hinting toward future users will not even know they are on-chain unless they go looking for it.

What remains to be seen then is quite simple: can Voice pull off what up until this point was almost impossible? Can they make the app registration with embedded KYC something to rival what LynxChain has just pulled off - for love ‘em or hate ‘em, it’s hard to deny that to date their registration process is one of the simplest and least time consuming both within the EOS space and beyond yet. Furthermore, can Voice win the hearts and minds of the beyond EOSIO evangelists and beyond crypto masses? Can they transition through the process of moving the beta through the English speaking regions towards a global user base in a timely fashion as to not relegate too many to the sidelines? Can they continue to stay at the forefront of innovation and bring the masses an experience that requires little to no blockchain and crypto knowledge to register and become a beacon towards pro crypto sentiment and taking back the power from traditional social platforms that profit from our attention and data?

As for how it will all come together, well, everyone’s guess is as good as mine. All we can really do is go off of the information out there and speculate at will about what exactly may come to pass until that time presents itself where we can see how this all plays out. Truthfully, I for one am pretty optimistic that things will work out very well in many regards for Voice, but we can see that despite how much promise this platform shows and the genius behind the concept, this will not be some quick draw transition that takes the world by storm at first light and throws the town into some new golden age of Wild West euphoria. So long as you are ok with the fact that it’ll take some time to get it to where we can see real progress then I suspect in the end you’ll be happy you stuck around through all the rally cries and FUD. We hope that those in the space that believe remember that in small part the success of Voice is the success of us all - for to make your Voice worthwhile we need an audience to captivate. So if your like me and cannot even speculate on a time when you might actually get the pleasure of having a Voice of your own, don’t forget, there will be plenty of Voice’s to follow on the beta, plenty of information to share, and a lot of territory beyond our normal EOS meanderings to explore.

Please note: in order to procure Voice tokens you must complete KYC. Like in everything crypto there are always those that are trying to scam their way into wealth. Please do not reply to any emails, follow free voice tokens to scam voice sites intended to steal your funds, or interact with anyone anywhere beyond the official site (voice.com) and affiliated social links listed there. The site is also a great place to learn the intricacies of the Voice platform including the what, why, and how of what they are ambitiously working towards achieving.