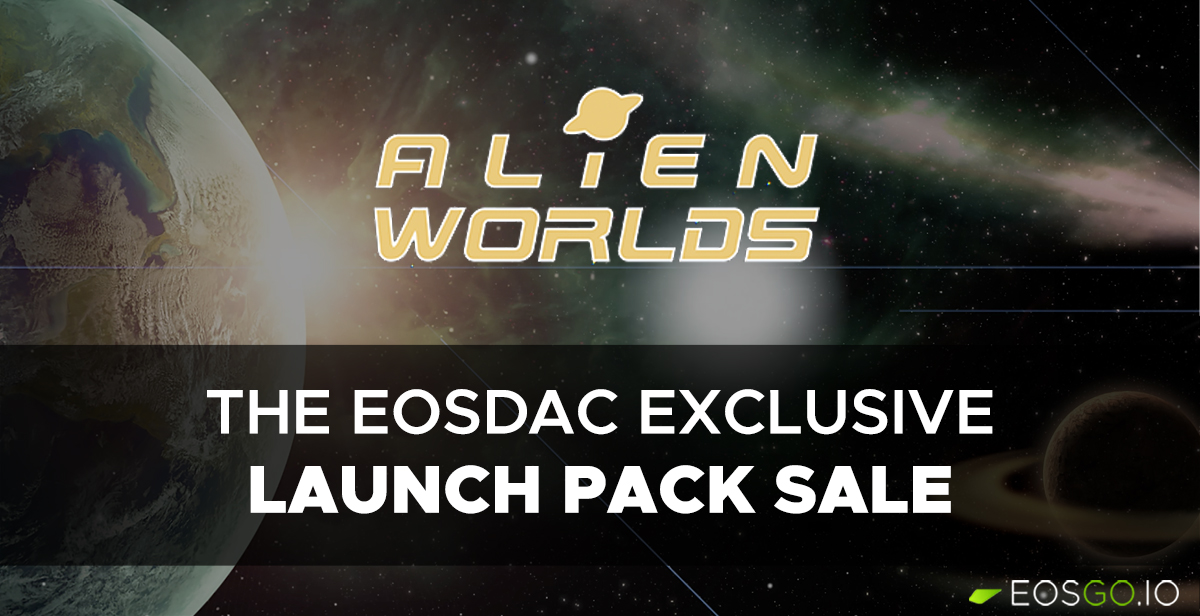 Alien Worlds is the NFT defi metaverse by the team instrumental in the 2018 creation of eosDAC, the decentralised autonomous community.

What is the eosDAC Exclusive Launch Pack sale?

It’s an Alien Worlds NFT pack sale that you can only purchase using EOSDAC (tokens). You’ll receive a 4-card pack which might include a Dacalizer card. This pack also has double the chance of receiving legendarwax.y and mythical cards versus our last sale.

You don’t have to be a voting member of eosDAC to participate in the sale, you just have to pay with EOSDAC tokens which you can buy on an exchange.

Or participate live in the Dutch auction starting at 13:00 UTC on Friday 20th November; the auction will drop prices every hour until we sell out or for 36 hours, whichever comes first.

Join our Telegram or Discord to ask questions and chat.

What is contained in the pack?

There are 4 cards drawn into the eosDAC pack. Each card has the following probabilities of being of the rarity below:

DAC Special Item is the Dacalizer

Each card is drawn independently, so your pack could contain four cards of the same rarity.

This is double the chances of legendary and mythical versus our previous pack sales.

Are there first mints in the eosDAC pack?

Yes, if you’re the first to receive and unbox a Dacalizer you can get the first mint Dacalizer.

Additionally, there are still some low mints of legendary and mythical cards left.

The Dacalizer is a tool NFT used in Mining. It’s an explosive with stats that make it extremely useful to a casual mining — It gives a miner a relatively large payout from the pot and a high chance of NFTs.

Remember, mining is a key way of earning Trilium, the metaversal fungible token. So having a Dacalizer could be helpful to a lucrative mining strategy.

The full mining attributes of all tools including the Dacalizer are here:https://docs.google.com/spreadsheets/d/1BjpZQfG5JWnL5Vv_YMAi3LYytHJSBwhnLDp0Sc2zHCg/edit#gid=0

If you received a dropped promo pack, go to https://unbox.alienworlds.io/to claim and unbox your card from Sunday 22 November.

Where can I buy EOSDAC?

Exchanges with active EOSDAC markets that are active include:

I’m new and I don’t have an EOS account

If you buy EOSDAC on Gate.io you don’t need an EOS account, you can hold your EOSDAC on the exchange and buy your eosDAC exclusive pack directly from that account.

If you want to use Newdex or Defibox you’ll need an EOS account to hold your EOSDAC tokens.

eosDAC is the only decentralised autonomous community block producer on EOS, and was the first airdrop to EOS tokenholders during the EOS ICO. The eosDAC airdrop may have helped propel the EOS ICO to greater heights!

eosDAC’s custodians include Michael Yeates and Brock Pierce. If you’re buying EOSDAC tokens to use in the Alien Worlds eosDAC pack sale, why not buy a few more and start voting for custodians and participating in this great decentralised autonomous community? Find out more athttps://eosdac.io and vote at https://members.eosdac.io/.

PS — why do we sometimes use eosDAC and sometimes EOSDAC in capital letters? eosDAC is the project and decentralised autonomous community name. EOSDAC is the token symbol.

Lots more news coming as we build up to the Land sale in December — Please make sure you follow Alien Worlds and join the relevant channels.