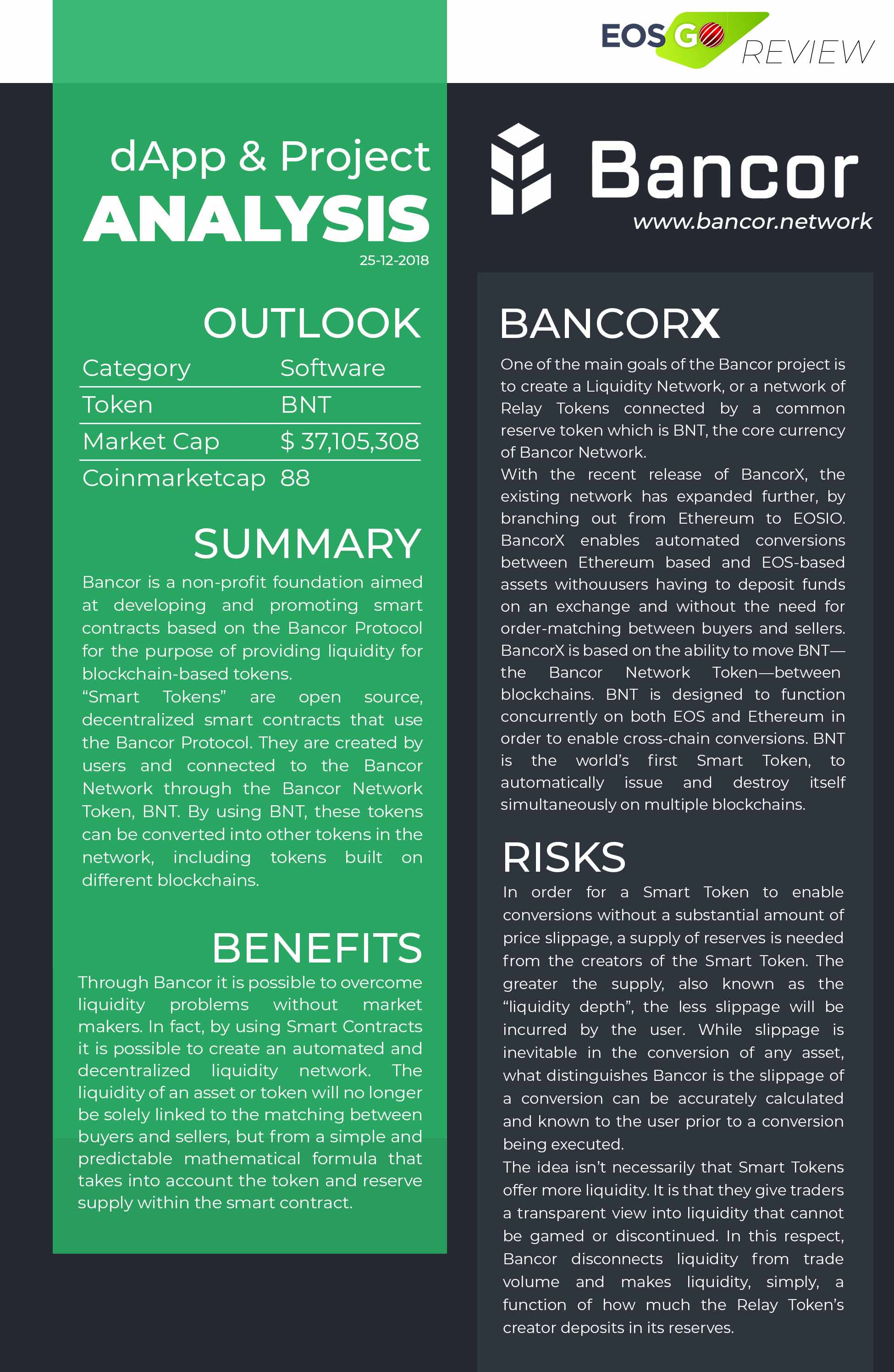 Bancor is a non-profit foundation aimed at developing and promoting smart contracts based on the Bancor Protocol for the purpose of providing liquidity for blockchain-based tokens. "Smart Tokens" are open source, decentralized smart contracts that use the Bancor Protocol. They are created by users and connected to the Bancor Network through the Bancor Network Token, BNT. By using BNT, these tokens can be converted into other tokens in the network, including tokens built on different blockchains.
When converting between tokens, you are transacting with these smart contracts directly on the blockchain. There is neither a counter-party, nor an order book involved, and all transactions are calculated in real time using the smart contract’s built-in pricing mechanism based on the Bancor Formula. You may use the bancor.network Web App as a user-friendly interface to the smart contract network. Bancor does not initiate or otherwise process any transaction and Bancor does not charge a fee. When you use the Web App to access Bancor Protocol smart contracts, all transactions are executed directly by you, without any involvement of Bancor. Your wallet and funds always remain under your sole control.

What are the benefits of Bancor?

To understand the problem Bancor is trying to solve we should look at how market makers operate. Currently, the market maker industry is based on the matching of buy and sell orders. When someone wants to buy or sell an asset, they need to meet on an exchange and agree to do business with a counterparty (seller or buyer). These two agents agree on a price, and the price is based on the intersection of supply and demand. Problems arise when there are limited agents selling a particular asset. If there is low liquidity, the product may not be tradable. To overcome this issue, and continue to provide liquidity to assets, exchanges need to ask professionals to engage in trading activity to provide liquidity. These professionals are known as market makers. Market makers make profit by pocketing the difference between the price to buy and the price to sell the – also known as the bid-ask spread.

In the image above we can see an example of an order book.

“An order book is an electronic list of buy and sell orders for a specific security or financial instrument, organized by price level. An order book lists the number of shares being bid or offered at each price point, also known as market depth.” From Investopedia

Unfortunately, the current Order Book does not provide an optimal view of the market depth, as orders can be easily deleted, or market participants can collude to artificially inflate or decrease the price of an asset. This opens the possibility of manipulating the order book. In the world of cryptocurrencies, many practices have been adopted which leverage order book weaknesses, such as pump and dumps, spoofing and wash trading.

Bancor solves the manipulation problem: Through Bancor it is possible to overcome liquidity problems without market makers. In fact, by using Smart Contracts it is possible to create an automated and decentralized liquidity network. The liquidity of an asset or token will no longer be solely linked to the matching between buyers and sellers, but from a simple and predictable mathematical formula that takes into account the token and reserve supply within the smart contract.

Bancor's predetermined order flow overlaid on a traditional order book. The dotted line shows the price of a Relay Token rising in response to a purchase, while demand and supply schedules remain fixed due to automated pricing. From Bancor Medium

How does Bancor Work?

Relay Tokens are essential for the operation of Bancor. The Relay Tokens are Smart Tokens that are linked to reserves of two different tokens with a weight of 50%. The operation of a Relay Token is very similar to that of a scale, where two plates hold the balances of the token reserve. To better explain this concept, let's take an example from the Bancor website’s FAQs.

Example: "If we were to create a Relay Token named ENJBNT, where one connector has a balance of 1,000 ENJ tokens and another connector balance of 10,000 BNT tokens, the Relay Token will function with the value of 1 ENJ = 10 BNT. If someone tries to buy 1 ENJ from the Relay, they will need to send the Relay Token's converter 10 BNT tokens. After that transaction occurs, the supply of the tokens in the relay changes, and now the Relay Token assumes that 999 ENJ = 10,010 BNT." In this case, the price of 1 ENJ will be equivalent to 10.02 BNT.

In the event that another user should perform the opposite operation and sell 1 ENJ from the Relay at the price of 10.02 BNT, the two operations would cancel and return to the starting point with 10,000 BNT and 1,000 ENJ within the Relay. Therefore it is possible to trade tokens inside the Relay, without needing a counterparty. Moreover, it is possible to calculate how the price of the token will move before the trade is executed, thereby measuring the price slippage in advance. This eliminates problems of collusion and manipulation** that plague traditional order books. As an added layer of protection against abusive behavior, every movement of tokens and every calculation performed on the Bancor Network is fully recorded on-chain. This ensures that all activity on Bancor is completely transparent and auditable on the blockchain.

If you would like to have some additional and specific information regarding the mathematical formula used within Bancor, you can refer to this file and this Google Spreadsheet

One of the main goals of the Bancor project is to create a Liquidity Network, or a network of Relay Tokens connected by a common reserve token which is BNT, the core currency of Bancor Network. With the recent release of BancorX, the existing network has expanded further, by branching out from Ethereum to EOSIO. BancorX enables automated conversions between Ethereum-based and EOS-based assets without users having to deposit funds on an exchange and without the need for order-matching between buyers and sellers. BancorX is based on the ability to move BNT — the Bancor Network Token — between blockchains. BNT is designed to function concurrently on both EOS and Ethereum in order to enable cross-chain conversions. A key component of this cross-chain functionality is the unique ability of BNT, the world’s first Smart Token, to automatically issue and destroy itself simultaneously on multiple blockchains.

The Bancor project started its journey in the cryptocurrency world with one of the biggest and most successful Token Generation Events attracting $153 million worth of ETH from more than 10,000 contributors. Part of these funds has been allocated for the continuous development and expansion of the Bancor Liquidity Network. These developments are promoted by the Bancor Foundation, a non-profit foundation comprised by Bernard Lietaer (the co-architect of the EURO), Judo Schmitz-Krummacher, Eyal Hertzog, Guy Benartzi, Yehuda Levi and Galia Benartzi.

Among the members of the Foundation are the creatorP of the Bancor protocol, Guy Benartzi (strategy), Galia Benartzi (business development), Eyal Hertzog (product), and Yudi Levi (technology).

Moreover, they are affiliated with LiquidEOS, a Block Producer on the EOS mainnet, with whom they share significant team members as you can see on the LiquidEOS website. As of 20 December 2018 LiquidEOS is ranked first among the EOS mainnet BPs.

In order for a Relay to enable conversions without a substantial amount of price slippage, a supply of reserves is needed from the creators of the Relay. The greater the supply of tokens in the Relay Token, also known as the “liquidity depth”, the less slippage will be incurred by the user. While slippage is inevitable in the conversion of any asset, what distinguishes Bancor is the slippage of a conversion can be accurately calculated and known to the user prior to a conversion being executed. The idea isn’t necessarily that Relays offer more liquidity. It is that they give traders a transparent view into liquidity that cannot be gamed or discontinued. In this respect, Bancor disconnects liquidity from trade volume and makes liquidity, simply, a function of how much the Relay Token's creator deposits in its reserves.

The information provided on this website does not constitute investment advice, financial advice, trading advice, or any other sort of advice, and you should not treat any of the website's content as such. EOS GO does not recommend that any cryptocurrency should be bought, sold, or held by you. Nothing on this website should be taken as an offer to buy, sell or hold a cryptocurrency. Do conduct your own due diligence and consult your financial advisory before making any investment decision. EOS GO will not be held responsible for the investment decisions you make based on the information provided on the website.