Handling money in the form of digitized assets has been one of the primary applications of blockchain based dapps. Understanding how digital tokens work is essential in understanding a blockchain based platform, for it being a topic that will also come up frequently in application development. In this article, we will try to understand the handling of tokens on EOSIO via the standard eosio.token contract.

We will discuss the how native EOS tokens work, and how could we deploy our own tokens on EOS blockchain. We will also discuss the standard token contract in technical depth, which will also throw light on the nitty-gritty details of EOS smart contract development in general. It is assumed that the reader have some familiarity with modern C++, although we will try to explain each line. 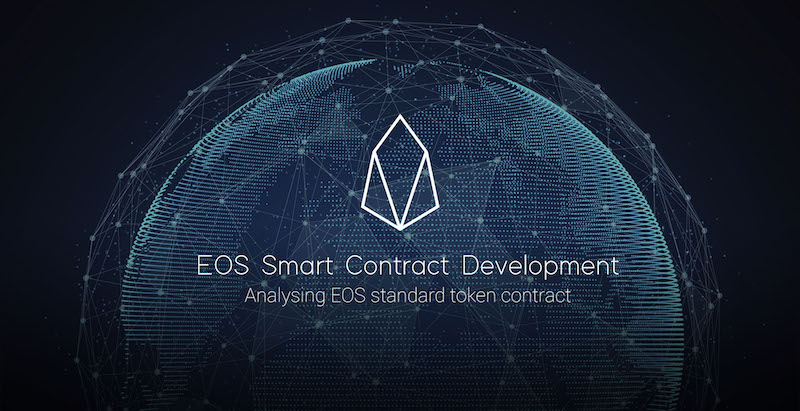 Before reading this, we would recommend to read the previous articles in this series, to gain a better understanding of EOS platform and basic smart contract concepts in general. So let’s get started!

Before coming to standard token contract first, we need to understand how the smart contracts play a vital role in most intrinsic functionalities of EOSIO. Tasks like buying and selling RAM, and delegating bandwidth are implemented as a smart contract running on the EOS blockchain. These contracts are present at the genesis of the EOSIO blockchain, so they are also referred as system contracts.

Overview of the eosio.token contract structure

Blockchain developers familiar with Ethereum will tend to compare the popular ERC20 token standard to the eosio.token contract. However, both of them are quite different in their approach. The general rule of thumb in smart contract development is to make them as simple as possible, as complex design leads to potential vulnerabilities, which are to be avoided at any cost considering the decentralized nature of handling of funds. Because of this, eosio.token contract was designed to be very simple and consists of very basic functionalities. Also unlike ERC20 standard, we can define multiple currencies on a single token contract. Following actions are exposed by the eosio.token contract:

Persistent information like account balances and currency types are stored in RAM, and accessed via multi-index tables. As we can see, eosio.token contract exposes only bare essential features and avoids any complexities. Let’s discuss the technical details of the eosio.token contract.

EOS smart contracts are implemented as a C++ class and inherits from the eosio::contract base class. This base class consists of one data member named _self, which can also be accessed using it’s get_self method. This member represents the account where this smart contract has been deployed on. The instance of this contract is created every time any action is issued for this contract. The eosio::contract base class holds the integer representation (code) for the action currently being executed.

The header file (eosio.token.hpp) contains the member and method declarations, and the (eosio.token.cpp) file contains their definitions. The structure of eosio.token contracts start with defining the contract class and inheriting from the eosio::contract base class.

Smart contracts are compiled to web assembly using the eos-cpp module of the eosio.cdt, which is a contract development toolkit that provides tools and libraries for creating contracts and converting them to web assembly, and generate ABI. For that to happen, we need to specify pre compilation instructions to eosio.cdt so that it can recognize types and methods for wasm (web assembly file) and ABI. ABI is a JSON file that consists of the declarations of the types and methods exposed by the smart contract, which is useful for interaction with the contract.

These pre compilation instructions are specified by using C++ attributes. In above code, we can see the statement [[eosio::contract("eosio.token")]] which specify that this class represent a contract. All the action definitions and the static methods (if defined) are public members. State variables, table structure definitions, and helper methods are private members as a convention.

Important types used in making contracts eosio::asset is a type that is used to handle tokens efficiently. It prevents numerical overflows and enables easy and secure handling of tokens. eosio::asset comprises of two fields, amount and symbol that store the amount of the token, and the symbol of the token respectively. Thus the value 100.0000 SYM can be represented as an asset with amount as 100 and symbol as ‘SYM’. Also note that symbol itself is defined by eosio::symbol_type and integer precision, and in our example, symbol_type is ‘SYM’ and precision is 4.

eosio::name is a type that is used to represent an account inside smart contract. It encapsulates a string and it’s integer representation. It also exposes an overloaded operator _n which can be used to convert a string to eosio::name type. For example we can convert string “mystring” into eosio::name like “mystring”_n.

Tables used in eosio.token contract For defining multi-index tables, we first need to define the structure of the rows that will be stored inside table, and then use that type for defining the multi-index table. Standard token contract uses two tables, account and currency_stats to store balances and information about the currencies respectively. Let’s discuss each of them.

This table is used to hold the balances for various currency types for a given account. First we have defined a struct with a field balance of type asset and a method called primary key that returns 64-bit unsigned integer. Field balance represents the amount of a given currency type.

The method primary_key() is used by the multi-index table to fetch the primary key value for the given row, which must be of the type uint64_t. Here, it is returning the raw integer equivalent for the symbol. Thus each row in this table will represent a unique currency type along with its associated balance.

Next, we define the table type by specifying the name for the table and the type it will hold. “accounts”_n represents the table name of the type eosio::name, and account refers to the struct we declared above.

We can then instantiate this table by specifying code and scope, to use them inside functions to access the persistent storage. Code refers to the name of the contract this table belongs to, and scope is used to separate the concern for the table. For example,

Here we have instantiated table called to_acnts of type accounts with code as _self and scope as integer representation of bob account. Thus we will get access to all type of tokens that are held by Bob. With scope, we can further segregate the values of the tables.

This table is used to store all the currency types that are being issued using this contract. It holds the current supply, maximum supply (both of the type eosio::asset) and the issuer account. Here the issuer is account that created the token type specified by supply and max_supply.

This table is instantiated with code as the smart contract account (_self) but with scope as the integer representation of symbol type. This means that this table is segregated on the basis of the symbol type of the tokens.

First we check if this action was indeed called by the contract account itself, using the require_auth(_self) statement. This function accepts the eoso::name object which refers to the account whose authority is to be checked. Then we check for invalid values for the inputs using eosio_assert(), which fails the transaction with the provided message if the given condition is violated. Finally if all the assertions were passed, we create new currency by persisting this information in the stats table. This is achieved using the emplace function of the multi-index tables. This function accepts two parameters, the first is the account that will pay for the RAM for storing this particular entry. Second parameter is a lambda expression, which is responsible for setting the values for the new row to be created. Thus after successful execution, we would have created a new token on the token contract.

This action is called by the currency issuer for issuing tokens to the desired accounts. Let us call the account getting the issued amount as ‘target account’.

Using eosio_assert(), we check for valid symbol types and quantities, and for authority of the issuer and if the specified token exists. For querying the multi-index table, we use the find method on the table instance. The find method returns the iterator that points towards the record if it was found, else it points to the end (sentinel) value of the table. If all assertions were passed, we need to update the balances of the target account, as well as increase the supply for our token type to reflect the increased circulation of the tokens. For updating the circulation, we increase the supply in the stats table for the target token and after that, we need to transfer

To do that, we need to call modify method on the stats table. This method accepts 3 parameters. First, it takes the iterator that points to the record we want to update (which we got during find operation). Second, it takes the RAM payer that will pay for the changes in the record. If the new changes might need extra RAM space, this account will pay for that. In our case, we have specified it as same_payer meaning the original payer account should be used (which is issuer in our case). Third argument is a lambda expression, that will make changes in the desired record.

To transfer from the issuer to target account, we make call to the transfer action of the contract by issuing an inline action to the transfer method. In EOS smart contracts, we can initiate actions on our own accounts as well as the other accounts. To call the action from inside the contract, we use the macro SEND_INLINE_ACTION(). It takes 4 arguments; the account name of the contract, name of the method, associated permission and the data to be passed to the action. Here we send an inline action to the transfer action of the same contract. Thus tokens are finally issued to the target account.

Wrapping up the eosio.token contract**

We have covered the overall structure and most of the basic constructs that go into making smart contracts in general. This analysis will provide readers with enough prerequisite knowledge to analyse the remaining actions for the contract. The source file is given below for reference.

I hope that this article has been useful for the new EOS developers. Thanks for reading!