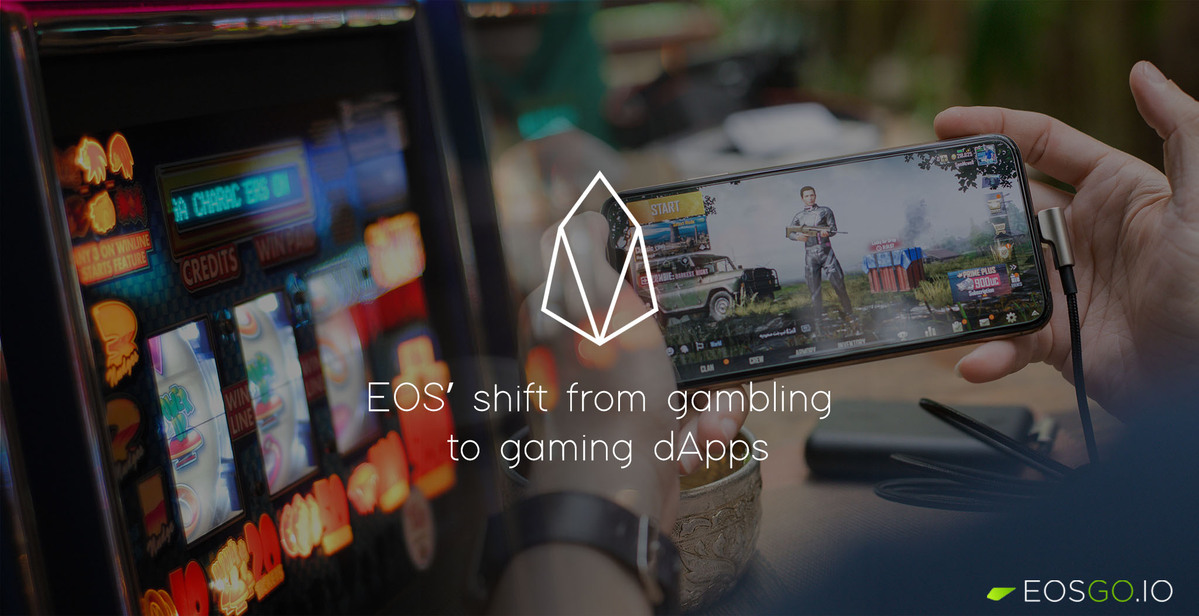 When EOS first launched it gained massive support from gambling dApps due to its fast transaction speeds and feeless transactions. Many of these dApps, along with their users, migrated from different blockchains to call EOS their new gambling home. In the beginning of the year (2019) gambling activity accounted for 70% of overall traffic on the EOS blockchain. Leading to EOS being dubbed the gambling blockchain. To put things into perspective only 2 dApps in the top 25 were for gaming. Two other dApps in the top 25 were exchanges and all the rest were for gambling.

Gambling dApps played a huge role in the early use case of EOS. They helped prove that the blockchain does, in fact, work as intended and to bring attention to any possible issues that might arise. A combination of the fast network and the exodus of gambling dApps quickly propelled EOS to being the blockchain with the most daily transactions. Weiss Ratings’ crypto division (Weiss Crypto Ratings) soon ranked EOS as the number one cryptocurrency. The result was determined using different metrics such as the rate of adoption and not just based on the number of transactions.

Fast-forward eight months. We find ourselves in November 2019 and in a landscape that has shifted from what it was 8 months ago. There’s a new king in town as gambling dApps are no longer the dominating force on the EOS blockchain. There are still more gambling dApps overall than any other but have relinquished their user base. Gaming dApps are now where the party is at. Where there used to be only 2 gaming dApps in the top 25, there’s now 7. Three of which make up the top 5 with one claiming the top spot.

Turns out not much has changed, at least with the performance of the blockchain. If anything the blockchain has improved. EOS is still growing from strength to strength and daily on-chain transactions are nearly 10 times higher than the nearest competitor. In fact, EOS was yet again ranked as the best blockchain in China’s most recent Global Public Blockchain Technology Assessment Index) earlier this week. The blockchain also sees more daily active users than its competitors despite having only 1/8th of Ethereum’s total number of dApps.

The top 3 gaming dApps make up for more than 15% of EOS’ daily dApp active users. When you ask what has changed, I guess the simplest answer would be that gaming dApps have finally come. Early in the year there were barely any other dApps other than gambling ones. Gambling dApps provided the ‘Proof of Concept’ that many other projects and dApp developers were waiting to see.

Gaming is much more popular and caters to a wider audience. It has a vast gallery of the different genres of games people can play. Whereas gambling caters to an older and somewhat niche market. Gambling is often frowned upon by certain communities and cultures which is still something the industry is battling against. Without a doubt gaming has the upper hand.

This quick shift of focus from gambling to gaming signifies that the EOS blockchain is making good progress. What’s really surprising is the rate that this progress is being made. We are talking about a project that only launched last year June, competing in a space that’s dominated by revered and seasoned blockchains. Yet just a year later EOS did not only manage to gain significant market share but also managed to dominate in so many other aspects, from its technology all the way up to its active user base. This type of rate in growth has all the signs of a coming seismic shift in the blockchain space. EOS may be about to surpass Ethereum’s market cap and become the leading dApp blockchain. 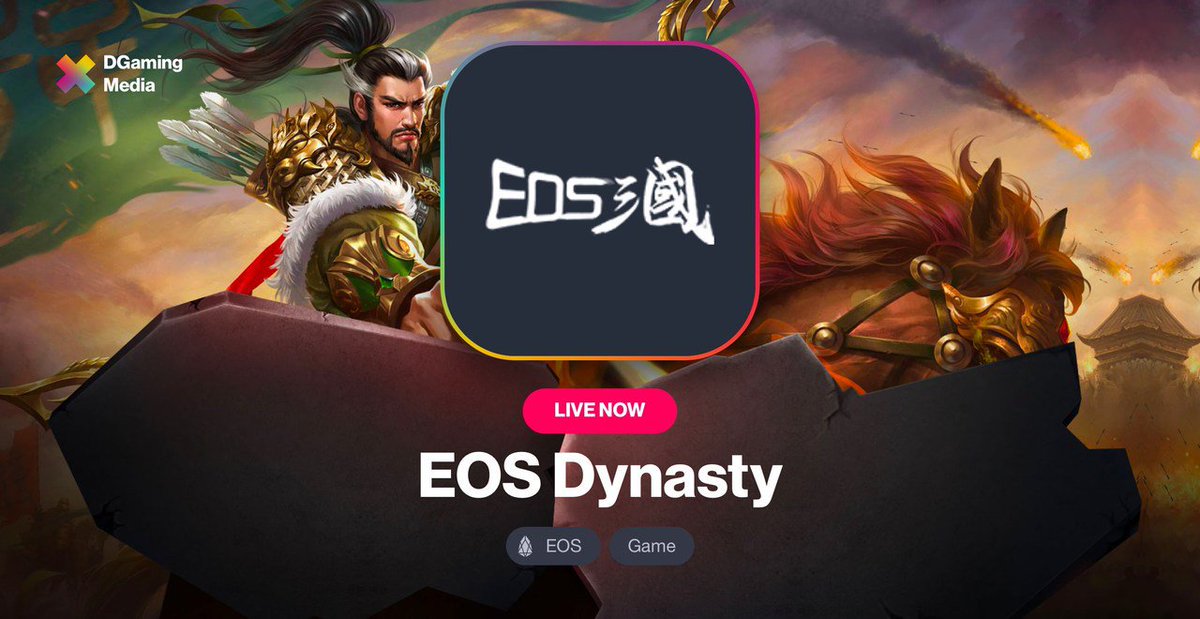 People are social beings. We like to communicate, play, interact and connect with one another. Online gaming caters to all these human necessities. Which is the reason why online gaming has seen a surge each year. According to TechCrunch, over the last 18 months the global gaming industry has seen $9.6 Billion in investments and on track to be higher than the previous eight years combined. The total global gaming market cap is estimated to be worth $152 Billion by the end of this year. Eight years ago (2011) this figure was $74 Billion.

What is more global than a decentralized network without boarders? Blockchain is the future bedrock of all things gaming and EOS is already set-up to facilitate this industry. A major selling point that blockchain has over traditional systems is its use of NFTs in gaming. An NFT is a Non-Fungible Token meaning each token is unique and different from the next. These types of tokens are used in gaming as a representation of digital assets such as tools, weapons and even characters etc. These tokens can then be sold or traded amongst players or even speculators. NFTs make it possible for gamers to verify the scarcity of each in-game asset and protects them from game developers creating more. This helps to ensure that the value of a player’s assets isn’t corrupted by third parties. NFTs are not limited only to gaming.

I won’t go into further details about NFTs but if you’re interested in learning more about how they work then you can read a recent article I wrote on them titled ‘The NFT Revolution’.

Gaming will continue to play a huge role in promoting the mass adoption of blockchain technology. Hopefully, EOS will continue to put more emphasis on that department by encouraging more dApps to join its ecosystem. The recent EOS mainnet v1.8 upgrade has made it possible for the development and deployment of mass applications. Another great feature this upgrade brought was the ability for dApps to pay CPU costs for their users. With this feature, gamers will be able to play their favorite games on-chain without the need to have staked resources in order to gain access. EOS games like Prospectors have already taken advantage and implemented this for their users.

Much like online gaming there is another beast that caters to the needs of the masses and that’s social media platforms. This mammoth of an industry is yet to be unleashed on the EOS blockchain. The reasons why we haven’t seen many social media platforms on EOS boils down to two arguments:

1. EOS is still a new blockchain, a little over a year old, and developers or companies haven’t gotten to building such complex platforms yet which are highly regulated by the way.

2. To make social media platforms possible, at least on a massive scale, the EOS blockchain first had to upgrade to version 1.8 to be able to support them. Other blockchains are yet to make this improvement, assuming they can first scale.

The gaming market is huge and if EOS can gain a piece of that pie it would make a significant contribution in growing our ecosystem. Gaming can serve as an entry point to the EOS blockchain for many gamers. Competition for social platforms on the other hand is much tougher as that market is dominated by Twitter and Facebook which also owns Instagram and WhatsApp. Facebook and Twitter also have a great deal of experience having been around for over a decade now. Any new social platform will have a hard time trying to compete with these two giants let alone one that’s on a blockchain. Such platforms can look forward to years of battling for market share although, if successful, this share could much bigger relative to gaming.

An aggressive approach to increase gaming market share seems the more sensible approach to me, then slowly roll in social platforms. This coordination of slowly rolling out platforms/dApps is impossible in a decentralized system but you get the point. To rush growth this early on in the blockchains development stage may end up destabilizing the entire chain. Similar to what happened to Ethereum’s network with that whole Crypto Kitties game debacle. We’re already battling with network congestion issues on different fronts. However, I’m glad that this is happening this early in our development phase and it will be sorted out soon enough. These congestion network issues help push the blockchain to its limits so that it can work to further those limits. Anyways, that’s just my two cents worth.

All the information about dApp stats in this article were conveniently taken from State of the DApps and DappRadar, sites that track dApps statistics from multiple blockchains. Thanks to these sites I was able to locate and present dApp data much quicker than it would’ve been otherwise.

Thank you for reading!