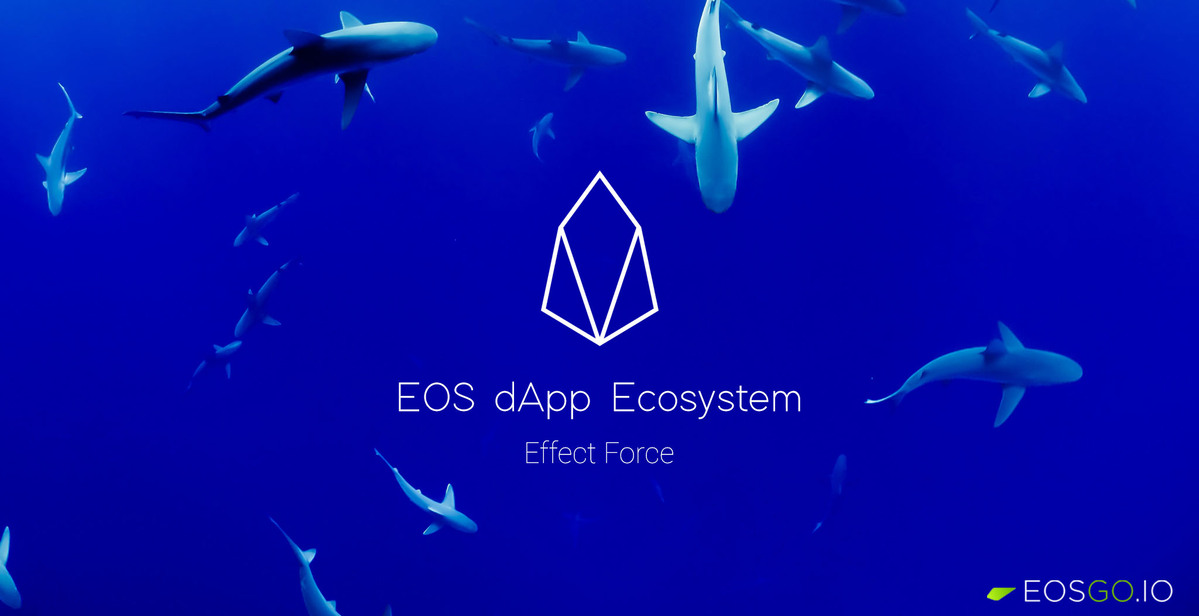 My aim with this article is to not only tell you about this amazing platform but also give you an insight into the industry this platform is trying to disrupt, its benefits to the user and the possible impact on the usage or rather the mass adoption of blockchain technology.

Effect.ai is the company behind Effect Force a decentralized platform for machine learning developments and other Artificial Intelligence (AI) related services. The platform caters to organizations looking to develop their own in-house AI algorithms. Effect.ai aims to develop such AI services through its workforce to sell them on the smart market to businesses that require them, at competitive prices. With the introduction of this smart market, the platform will also provide for AI developers looking to sell their algorithms on the market. All transactions and the exchange of services are fueled by its native token EFX.

At the moment Effect.ai has successfully brought in individuals, businesses and governments to delegate work for AI training on the platform. In a future that is AI and digitally-centric platforms like this one will continue to grow in stature as they help in the building, conversion and bridging of the gap between the old world (physical) and the new world (digital). The biggest reason I regard this project as my favorite in all of blockchain is because of its modest yet great vision to build the biggest AI platform. A platform that is inclusive of all global citizens and built by them.

Such a feat I thought far-fetched until I read more about the team and founder (CEO) Chris Dawe, one of the more passionate individuals in this space. It’s a blessing for us to have him and his team on EOS, helping bring valuable global stakeholders to the blockchain. The governance of EOS and the proposed governance of the Effect Force network makes the two a perfect match in their shared philosophy. Making their migration from NEO to EOS all the wiser.

We live in a world filled with monopolies where a few of the big companies own many of the small/medium sized businesses. Every industry is dominated by a big company that either operates within the industry or has bought its way in and to the top of that industry. In the industry of Artificial Intelligence two main players are the clear leaders – Facebook and Google. Not far behind is Amazon.

Facebook and Google have always had machine learning developments but keep it in-house for their own private implementations. Think how good Google is at figuring out what you’re trying to say and its directed ads, or how accurate Facebook is at suggesting ‘people you may know’. All that has been as a result of many years of privately developing specialized AI algorithms for their organizations. Which is something other companies may not have the understanding or resources to try and pursue.

The problem with the current AI market is that it’s still highly privatized and inaccessible to the average organization. The costs of implementing AI into their systems are very high coupled with the little to no knowledge of how they could incorporate them in their organizations. 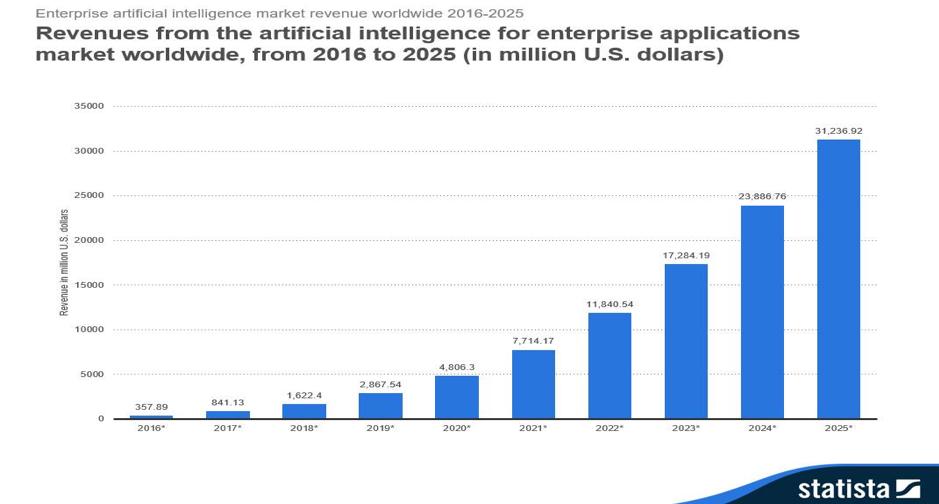 Machine learning or Artificial Intelligence development is one of the fastest growing industries greatly because of its abilities to boost business profits and innovation. The salary of a machine learning developer has more than tripled in just 4 years far outpacing other technology jobs. There is a very high demand for artificial intelligence related talent. Looking at the chart above and the future ahead, you can sort of see why.

Micro tasking is the process of splitting a large job into small tasks that can be distributed, over the internet, to many people. Instead of giving the job to a few qualified individuals within the organization, businesses can utilize platforms like Effect Force.

Effect Force utilizes a global workforce to help develop these AI algorithms and other related services. Anyone in the world can become a worker on Effect Force and receive payments in the form of the EFX token for doing simple yet vital tasks in AI development. As you become a more qualified worker you gain access to more complex and more rewarding tasks.

Some of the tasks you can expect to do as a worker include:

· Image classification - (describing what the image is or what it contains), something that’s as easy as ABC for a human but still a challenge for a developing AI system.

· Audio transcription - (transforming audio content into text), some AI can detect spoken English but what about Spanish or any other language? This is the benefit of Effect Force’s global workforce.

· Text extraction - (the extraction of text from electronic messages, documents, etc.), most AI is still learning to detect text from imagery.

· Annotations – (for instance, assigning labels to images), this makes it easier for businesses to organize and locate the required images from a large database like Getty Images.

The average salary for a machine learning engineer is roughly $146 000. With Effect Force organizations can get the same tasks done much quicker, with more accuracy and at a fraction of the cost. A global workforce is flexible and available 24/7. Each small task completed by a worker is constantly being verified for precision by a team of validators around the clock.

Effect.ai partnered with the UN to build the Effect Social Impact Hubs in Georgia. With the aim of these hubs to provide jobs and empower people from developing nations so they may become financially self-reliant. I see these hubs spring up in other developing countries in Africa, Asia or the Middle East for example, where people lack employment opportunities due to the lack of access to resources. A prime example of the UN’s ‘AI for Good’ initiative.

Yes, it can. Facebook, Google, IBM etc. have privatized their machine learning development programs and it doesn’t look like they’ll be changing that anytime soon. They continue to provide AI services at high costs and giving little value back to the communities in which they operate. Even Amazon’s micro tasking platform, MTurk, is yet to introduce AI dedicated micro tasks.

Effect Force has many advantages to its competitors. Firstly, it is decentralized and based on a blockchain, an undertaking that most of the bigger companies are reluctant to carry out. Not to forget that it’s on EOS which facilitates for greater scaling capabilities. Secondly, Effect Force utilizes a global workforce whereas its bigger competitors cannot due to certain regulations associated with companies operating in centralized systems. Lastly and probably less acknowledged, the fact that this is the only platform the team is focused on, whereas Facebook, Google, Amazon etc. have other things to worry about. These juggernauts are likely to acquire an existing platform than build their own.

The biggest challenge right now I would imagine is for any of these platforms to quickly build a large market share with a great workforce ahead of competitors. Countries like India and China which have over a billion people each should be of great interest. Effect Social Impact Hubs in India, for instance, would benefit the Effect Force platform but more importantly, the citizens of this developing nation.

Effect Force is one of the few platforms in all of blockchain with the capability to gain mass adoption. It ticks all the right boxes.

Not everyone is into gaming, social media, or gambling but everyone needs to work to earn a living. Effect Force provides everyone this opportunity and the ability for them to set their own targets, hours and type of tasks their willing to do without being bound to a single location.

Having partnered with the Decentralized Artificial Intelligence Alliance and the United Nations to bring AI to the people, Effect Force is making the right moves in achieving its vision. It is in the right place at the right time. Artificial Intelligence development demand is on the rise, blockchain tech is on the rise, and people all over the world are looking for work. This is amidst a time where presidential elections are run on the mandate that jobs should not be lost due to the rise of AI.

This is all exciting to me and watching how this platform progresses will be like having a front seat to the entire show – AI Unraveled. Not a real show. The privilege to help build ‘AI for Good’ is more the reason to be part of this tech revolution. Similar to the reasons I became a part of the blockchain/crypto revolution.

Thank you for reading this all the way through. I hope I succeeded in providing a glimpse into an unfamiliar industry in the blockchain space. This platform is a testament to EOS’ quality and to why the top blockchain dApp developers choose EOS, as I mentioned earlier on, Effect Force migrated from NEO.

Let me leave you with these words from the Effect.ai team about their decision to move to EOS in early 2019 –

“Over the last few months our core members explored many blockchain projects that have arose over the years in order to find a more suitable alternative. We dove deep into protocols like Ethereum, Komodo, Tezos, and a handful of others. There were several advantages and disadvantages to each of these protocols, but there was one that stood out above the rest: EOS. We found that EOS encompassed the most features and scalability options, which we know are essential to build a good foundation for the future of our development efforts. Simply put: EOS is scalable, easy to iterate upon, fast, technologically advanced, secure, has high TPS, and has a great community and ecosystem”.

Until the next one, Go EOS!